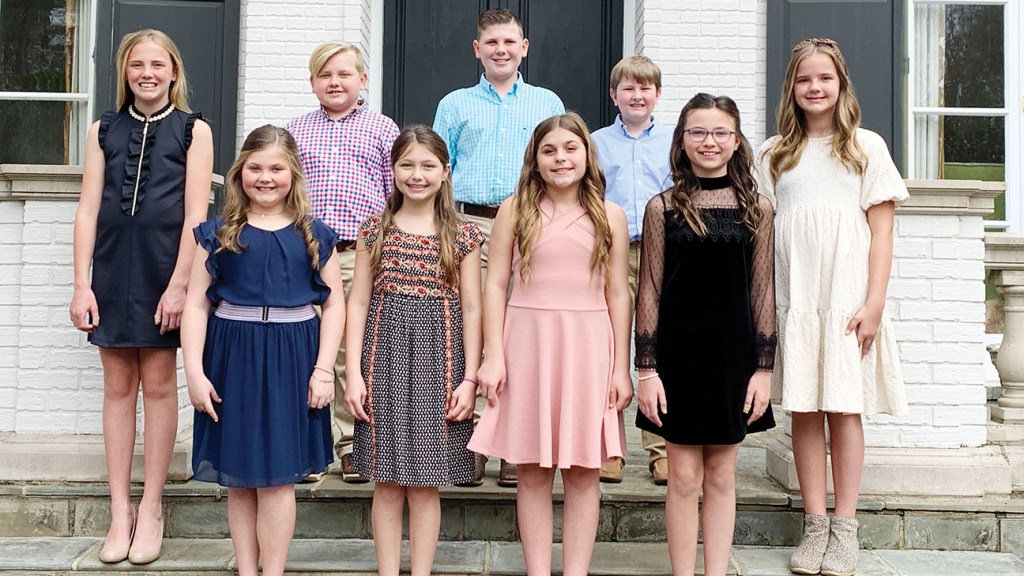 The 2021 Krewe of Ceres Charity Ball will be in April. Here are this year’s trainbearers.

Camille Katherine Calcote is the daughter of Mr. and Mrs. Colby Calcote. She is the granddaughter of Mr. and Mrs. Dennis Valentine, Mr. and Mrs. Scott Smith and the late Mr. Kent Calcote. She is a fifth-grader at Brookhaven Academy. Calcote is an All-A Honor Roll Student and a Mississippi Junior Scholar. She enjoys tumbling, playing soccer, basketball, tennis and softball. Calcote is a communicant at St. Francis of Assisi Catholic Church where she is an altar server. Her mother, Kathleen, served as Queen and as a maid. Calcote’s grandfather, Dennis Valentine, served as King of the Charity Ball. Her brother, Wilson served as a trainbearer.

Celie Jane Estess is the daughter of Dr. and Mrs. Justin Estess and Ms. Katharine Estess. She is the granddaughter of Mr. and Mrs. Cecil Estess and Mr. and Mrs. Jeff Hammond. She is a fifth-grader all A honor student at Christ Covenant. She enjoys reading, basketball, hunting, guitar, racing barrel horses and roping. She attends First Baptist of Brookhaven. Her father, Dr. Justin Estess, served as escort. Her Aunt Hannah Estess LaPorte served as a maid and as queen.

Collin Ryan Holmes is the son of Mr. and Mrs. Ryan Holmes. He is the grandson of Mr and Mrs Randy Wallace and Mr and Mrs Bennie Holmes. He is a fifth grade student at Lipsey Middle School. Holmes is an All-A Honor Roll student and is a Mississippi Rising Scholar. He served as a water boy for the 2020 football season. He participates in Dixie Youth Baseball where he has previously been selected as an all star. He also enjoys playing the drums and hunting. Holmes attends First Baptist Church.

William Ware Simmons is the son of Dr. and Mrs. Worth Simmons. He is the grandson of Mr and Mrs Robert Johnson and Mr. Gene Simmons and Mrs. Carol Simmons. Will is a fifth-grader at Lipsey Middle School. He is an All-A Honor Roll student and a Mississippi Rising Scholar. He served as a water boy for the 2020 BHS Football team. He enjoys basketball soccer and tennis. Simmons attends First Baptist Church. His brother Ben and Luke Simmons have served as trainbearers.

Hampton Edward Smith is the son of Mr. and Mrs. Brett C. Smith. He is the grandson of Mr. and Mrs. Hamp Smith, Mr. and Mrs. Edward Williamson, and Mr. Steve Grimes and the late Judy McAlpin Grimes. Smith is a fifth-grader at Lipsey Middle School. He is an all A Honor Roll student and is in the Quest gifted program. He enjoys riding his four-wheeler, hunting, fishing, football, baseball, basketball, tennis and playing the guitar. Smith is a member of Heucks Retreat Baptist Church where he is involved in choir, Royal Ambassadors, and Bible drills. Hampton’s father, Brett, served as an escort on the court and his brother, Bryce, served as a trainbearer. For almost 10 years, Smith’s mother, Erin W. Smith served on the Krewe of Ceres Board of Directors.

Lily Kingston Smith is the daughter of Dr. and Mrs. Chad Smith. She is the granddaughter of Dr. and Mrs. Mark Smith and Mr. and Mrs. Stan King. She is fifth-grader at Brookhaven Academy. She is an Honor Roll student and Mississippi Junior Scholar. She is a member of the fifth grade girls basketball team and fifth grade cheer squad. Smith attends Faith Presbyterian Church. Her great grandfather, the late Dr. Fred Smith, served as Charity Ball King. Her aunt, Mrs. Elizabeth Smith Allen, served as Charity Ball Queen. Her mother served as a maid and her father served as an escort. Her sister, Ella served as a trainbearer.

Mary Claire Sones is the son of Dr. and Mrs. Bill Sones Jr. She is the granddaughter of Mr. and Mrs. Bill Sones Sr. and Mr. and Mrs. Terry Reid. She is a fifth-grader at Lipsey Middle School where she is on the All-A Honor Roll. Sones enjoys playing tennis and gymnastics.  She attends First Baptist Church. Her brothers, David, John, and Drew, served as trainbearers on the court. Her parents, Bill and Carrie, both served on the court as a maid and escort. Her grandfather, Terry Reid, served as king.