Region 7-2A baseball gets started with Thursday doubleheaders 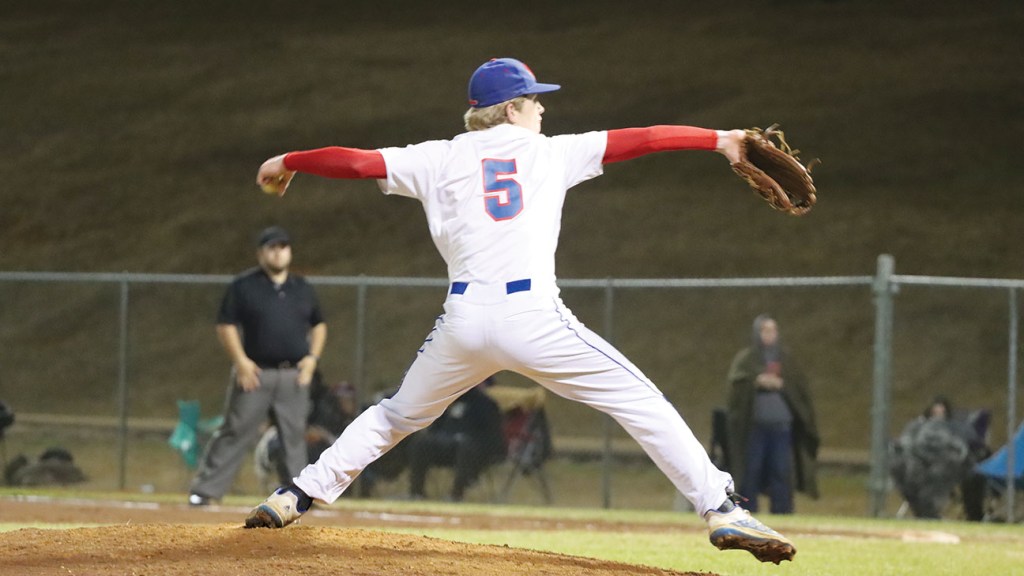 Photo by Lisa Smith Wesson junior southpaw Brett Boutwell and the Cobras got Region 7-2A play started with a sweep of West Lincoln Thursday night. Wesson takes on Loyd Star next week in a division series.

The plan for this season is that Region 7-2A schools will play a three-game region series each week. The schedule calls for a Tuesday night varsity game and then a varsity doubleheader each Friday.

That schedule was adjusted this week though, as wet weather moved the first game back to Thursday. Schools played their doubleheaders Thursday with the plan to finish up with a single game on Friday.

Enterprise has a bye this week and won’t start division play until next week.

Thursday on Ricky Smith Field, the Loyd Star Hornets (3-5) used 11 hits in game one to get an 11-3 win over Bogue Chitto.

The second game followed a similar script as LS took a 9-5 win in the finale.

The opener was tied 1-1 after the first inning as Loyd Star would then score two runs each in the second, third and fourth innings to take a commanding lead.

Hodges also had a double at the plate as did Blake Thornton and Carter Holcomb. Holcomb drove in a team high four runs while Hodges, Case DeHart, Riley Easterling and Harrison Hux had an RBI apiece for coach Jared Britt.

Brandon Welch led Bogue Chitto (2-8) with a double and RBI. Welch also started on the mound as BC head coach Gareth Sartin used five pitchers in the game.

Reid Smith and Eli Cupit hit safely for Bogue Chitto in game two as did Owen Anderson and Tristan Buffington.

Hux drove in three runs for Loyd Star in the finale.

“We pitched it well and hit the ball in the first game,” said Britt. “We benefitted off some free passes in the second game. We need to play better defensively, but I’m glad to start off district play with two wins.”

First year Wesson head coach Vance Windhom and his Cobras (2-5) picked up their first wins of the season Thursday with a sweep of West Lincoln (0-7).

The Cobras went up 13-0 early in game one as they grabbed a 15-5 victory in five innings.

The teams combined for nine errors in game one. Brett Boutwell pitched the win in the opener.

Gabe Bush and Brody Taggart had two hits each for WL in game one. Cooper Moak also had a double for Bear’s head coach David Gilbert.

The second game was closer as things were tied up at 3-3 before Wesson scored two runs in the bottom of the fifth on their way to a 6-4 win.

Sophomore Will Loy pitched a complete game win for Wesson in the nightcap. Loy struck out seven and gave up just five hits.

Loy and Diamond had a double each at the plate.

West Lincoln had 10 hits in game two, led by Taggart, Jon Brantlee Pedio and Brady Ratcliff with two each. Ratcliff had a pair of doubles while Moak added one double himself.

The Cobras take on Loyd Star next week in division play while West Lincoln has the bye.