Lady Bobcats 2-0 on the week, travel to Wesson tonight for region game 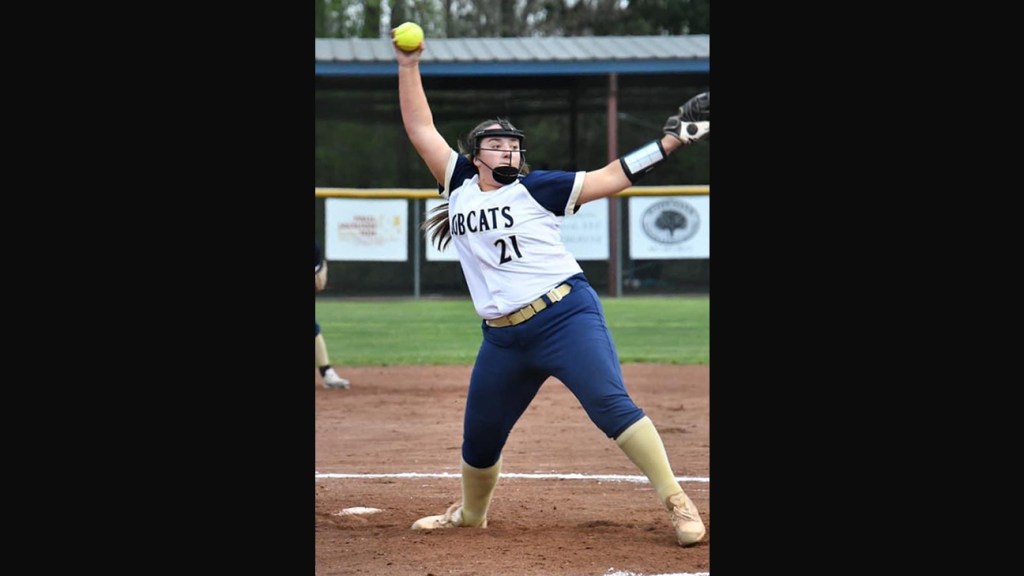 Photo by Stacy Leake Bogue Chitto senior pitcher Julianna Frazier has been masterful this week, giving up just two combined hits in wins over Tylertown and Enterprise while striking out 21 total batters. Bogue Chitto meets Wesson tonight at 6 p.m. in a Region 7-2A game.

The Bogue Chitto Lady Bobcats (4-5) and coach Kris Smith are riding a little wave of momentum as they picked up wins over Tylertown and Enterprise Monday and Tuesday to start their week.

BC travels to Wesson tonight for a 6 p.m. first pitch in a Region 7-2A matchup with the Lady Cobras.

In an 11-1-win Monday over Tylertown, leadoff batter Kayci Beth Wallace paced Bogue Chitto with three hits and three RBIs. Kaitlin Poole added a double for BC as one of her two hits on the day.

Lynsey Cooper and Julianna Frazier also had a pair of hits each. Also hitting safely was Taylor Jackson for the Lady Bobcats.

Frazier pitched the win and gave up one hit and one earned run while striking out 10 and walking only one.

The senior Co-Lin softball signee was equally impressive in the circle against Enterprise the next day. She struck out 11, walked none and gave up just one hit in a 3-0 win over region rival EAC.

Hannah Jergins had the lone hit for Enterprise coach Trace Abdul-Hadi. In the circle Jergins held BC to just four hits herself while striking out three and walking nine.

Wallace — a recent Southwest Mississippi C.C. softball signee — had a hit for Bogue Chitto in the win. Cooper, Frazier and Kylie Chapman all also hit safely for the Lady Bobcats.

Cooper, Frazier and Shyann Jackson had an RBI apiece for BC.

The win evens up the season series between the two schools as EAC took their first meeting 6-4 on March 5.