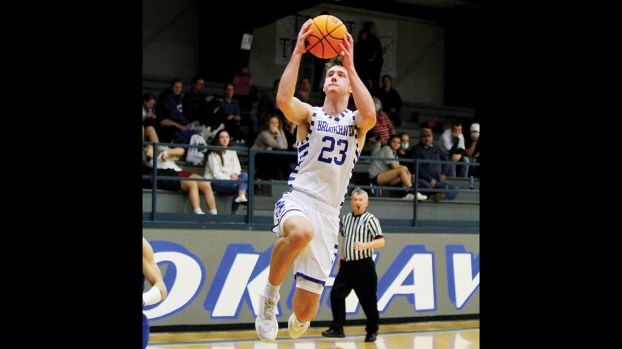 Photos by Sherylyn Evans Brookhaven Academy junior Tyler Fortenberry has starred on the football field and the hardwood for the Cougars since he moved to varsity athletics. His nearly 20 point per game average for a district championship basketball team has earned him Daily Leader All-Area Most Valuable Player accolades this season. 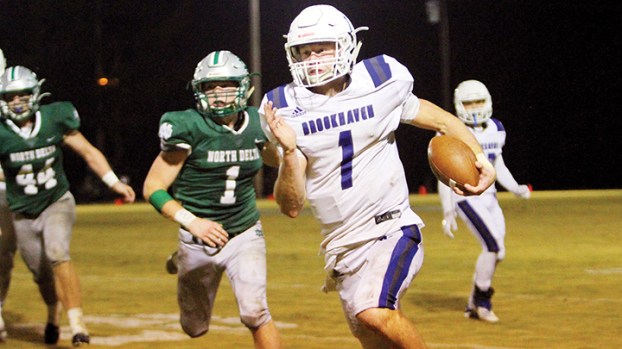 Photos by Sherylyn Evans Brookhaven Academy junior Tyler Fortenberry has starred on the football field and the hardwood for the Cougars since he moved to varsity athletics. His nearly 20 point per game average for a district championship basketball team has earned him Daily Leader All-Area Most Valuable Player accolades this season.

It would appear that someone is trolling Brookhaven Academy junior Tyler Fortenberry online. Check his MaxPreps or Hudl profile and his height and weight are listed as 5-foot-8, 125-pounds.

That could be an honest mistake, or it might be a prank pulled by one of his brothers.

Whatever the explanation, Fortenberry passed those milestones a long, long time ago. Clocking in at 6-foot-4, 190-pounds — Fortenberry has the size that opposing coaches and fans notice as soon as he gets off the bus.

As a junior his versatility was on display for the Brookhaven Academy basketball team and coach Josh Watts. He averaged 18.6 points, 5.7 rebounds, 1.9 assists and 1.5 steals per game for a team that swept their division foes and finished with an 18-11 record.

For that output, Fortenberry has been named The Daily Leader All-Area Most Valuable Player.

It’s debatable what sport Fortenberry plays best. A two-year starter at quarterback, he has the arm to make downfield throws and the size to run through defenders at the line of scrimmage.

As a junior, he’s come back to baseball this season after not playing as a sophomore. BA baseball coach Caleb Upton says his frame as a pitcher has allowed him to return to the diamond without missing a beat.

Still, basketball might be where he’s at his best. Most nights he’s a matchup problem for whoever the Cougars are facing. He can post up smaller guards or forwards tasked with stopping him.

The most efficient spot for Fortenberry is usually around the elbow. There he puts the ball on the floor and go around slower defenders with a dribble. His size allows him to finish at or above the rim while withstanding whatever contact may come.

In the open court he can jump up and slam the ball home — something that always get a big reaction from the home fans in John R. Gray Gymnasium.

“What people don’t see is that he works extremely hard in all sports,” said Watts. “He’s always in the gym at night or in the weight room. It’s not an accident that he’s as good as he is.”

When Fortenberry was a freshman he’d play a half for the BA junior varsity team, score 20 points and then hit the bench as to save his eligibility for the upcoming varsity game.

He paired with his brother Trey as the first subs off the bench for an eventual AA state championship team that season.

That team had a senior trio of Dawson Flowers, Tanner Thurman and Gage Brown that were the unquestioned leaders. It was their team.

That will be the crown that Fortenberry will wear alone next year as graduation hits the BA roster hard.

Trey and fellow forward Trey Brown are graduating. As are Tyler’s cousin Dylan and senior point guard Gavin Brogden — the second and third leading scorers on the team this season.

Tyler Fortenberry, his younger brother Trevor and guard Dane Flowers are the only experienced returnees on the varsity roster.

And that might be the most interesting chapter of his story yet to be written — what will he do when Trey isn’t lined up on the opposite block next season. Or when Dylan’s not there for the kickout three that was such a reliable place to send the ball previously.

Will his skills bring up the production of his younger, less experienced teammates?

“We’ve got a ton to figure out this summer when we go to camp,” said Watts. “There are some guys that have been working hard over the last few years and they’re ready to play — ready for their opportunities. They’re going to look to Tyler to lead us and I’m looking to him to build that trust with them. Next year will be a lot different, but I know he’s looking forward to it.”