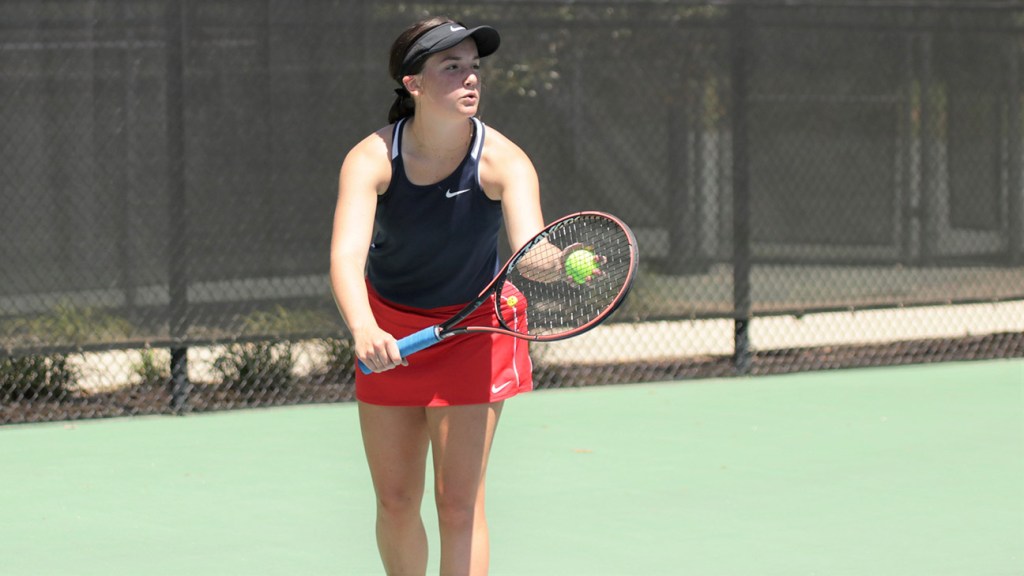 Photo by Becky Green Caroline Kilpatrick of Brookhaven High prepares a serve Monday in MHSAA 5A tennis playoff action against East Central. Kilpatrick and all of her BHS teammates will be in action later this month at the state individual tournament in Oxford.

The Brookhaven High tennis team will be well represented in the upcoming MHSAA 5A Individual State Tournament.

Every member of the BHS varsity qualified for the tourney that takes place April 26-29 in Oxford.

In boys singles, Sam Allen of BHS won 6-0, 6-1 over Henry Wilson of EC. Girls singles was the only place where East Central gained a point as Amaya Smith defeated Lilly Gray of Brookhaven in a third set tiebreaker.

The Brookhaven team of Sarah Adcock and Lauren Currie won 6-0, 6-0 in No. 1 girls doubles. The No. 2 girls’ doubles team of Lucy Allen and Allie McNeill took a 6-4, 6-0 win for the Panthers.

Brookhaven was equally dominant in boys’ doubles as the No. 1 doubles team of Pierce Legg and Logan Case won 6-1, 6-0 and the No. 2 team of David Sones and Jeremiah Layton took a 6-3, 6-0 victory.

In mixed doubles, Caroline Kilpatrick and Robert Adcock of Brookhaven won 6-1, 6-1 over the team from East Central.