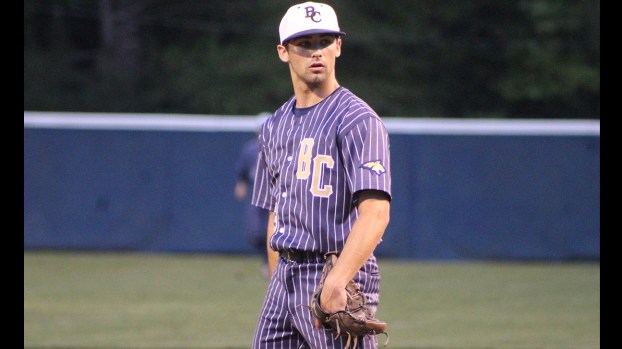 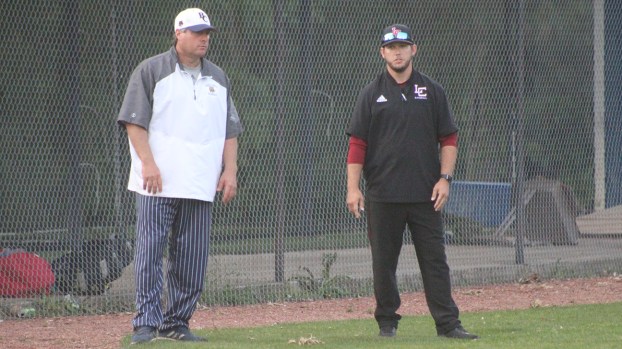 Photo by Cliff Furr Bogue Chitto head coach Gareth Sartin (left) and Lawrence County head coach Seth Avants talk during the first inning Thursday. Avants is a BC alum who started in baseball, basketball and football for the Bobcats during his playing career.

A three-run top of the sixth proved to be enough Thursday as visiting Lawrence County (10-9) used that spurt in what would be a 4-2 victory over Bogue Chitto (7-13).

Lawrence County head coach Seth Avants is in his second season leading the program after COVID-19 cut short the 2020 campaign.

Avant’s name and Bogue Chitto are synonymous as he starred for the Bobcats during his high school career. Avants signed with Co-Lin after high school and played baseball for coach Keith Case from 2010-2011 in Wesson.

The BC baseball team he faced Thursday was coached by his high school football coach, Gareth Sartin.

As a senior quarterback Avants was The Daily Leader MVP in football. Sartin’s team finished 8-4 that season behind over 2,5000 combined total yards and 29 touchdowns by Avants.

Thursday though he was back at he and his wife Chassity’s alma mater, sitting in the visiting dugout and facing one of his coaching mentors.

“It’s definitely a weird feeling,” said Avants. “Two programs that I really care about playing against each other. Both teams played well and I’m glad we were able to get the win.”

“He was a special player for us, for sure,” said Sartin “Seth always knew what would work best and where the ball needed to go, it’s no surprise he’s a coach now. And his team is a reflection of that too, they play the game the right way.”

LC went up 1-0 in the top half of the third when Tae Cole scored from third on a Bogue Chitto throwing error. BC pitcher Owen Anderson had just recorded a strikeout, but a throw down to third after that ended up in the outfield and with Cole jogging across home plate.

The Bobcats got two runs in the bottom of the fourth to take a 2-1 lead. Carson Price singled to start the inning and then reached second via an error that also put senior Reid Smith aboard.

A Colton Frith bunt moved both up a base and then Eli Cupit singled to score the pair.

The top of the sixth started with a walk by Cole. The Daily Leader Offensive MVP in football as a running back for the Cougars, Cole and freshman Kannon Cato give Avants two players that have a green light on the basepaths. LC had a total of seven stolen bases on the night.

Cole stole second and then moved up to third on a Nathan Bullock single. Another BC error would later score Cole from third. Bullock scored later in the inning on a Hunter Daley single.

Both Daley and senior catcher Evan Lambert have signed to continue their playing careers next season at Co-Lin. Lambert twice caught BC runners trying to steal Thursday for outs on the base paths.

The final LC run of the inning and game came when Cato reached via a single, stole second, made third on a passed ball and then scored on a dropped third strike.

Starter Owen Anderson was solid on the mound for the Bobcats. The senior struck out four and gave up two earned runs on 115 pitches over six innings. Anderson scattered six hits and walked three. Brandon Welch pitched the seventh for BC and struck out one on 14 pitches.

“Owen pitched well enough for us to win,” said Sartin. “We just had a couple things snowball on us and you’ve got to give credit to a tough Lawrence County lineup.”

Bullock, a southpaw, pitched the win for LC. He went the full seven and struck out seven while walking one on 110 pitches. He gave up five hits and zero earned runs. Cato and Daley had a pair of hits apiece for LC.

Felder Sartin and Colton Bales also hit safely for the Bobcats in the loss.

“I had to remind him before the game that we got them over there last year,” said Sartin of a 13-8 season opening win for Bogue Chitto last season in Monticello.

“He knows I was picking at him, but it really is a special feeling when you look over and see one that you spent so much time coaching now leading his own team,” said Sartin.