Face-to-face with Bowden and Jesus 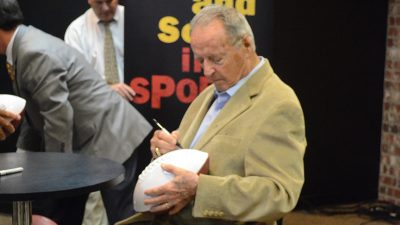 I had only been in journalism for three months when I was given a great opportunity, four years ago this week.

Robert Cleckler “Bobby” Bowden was coming to Brookhaven to be the keynote speaker at a Fellowship of Christian Athletes banquet. I would be able to attend the banquet on behalf of the newspaper and briefly interview one of the greatest football coaches of all time and one of my heroes of the faith.

Bowden coached at Howard College, South Georgia College and West Virginia University, but his legacy was built as the head coach for the Florida State University Seminoles from 1976 to 2000. Among many other accomplishments, his undefeated ’Noles won the 1999 national championship.

I stood in the “backstage” area with dozens of other people at the church where he was to speak, waiting for the coaching legend and outspoken Christian to arrive. When I saw him approach the door, he was stooped over and looked tired, frail and weak. My heart sank. I knew he was older, that he had health issues and that he’d come straight from a long plane ride, but my hopes were high in meeting one of the men I admired greatly.

When the door opened and he stepped inside, however, he transformed. He stood straight, walked with energy and confidence and greeted literally everyone he passed, stopping to shake hands and say hello. We were all charmed in an instant and he owned the room.

We took photos as Bowden sat on a stool and signed multiple footballs, photographs, books and a helmet. I stood to the side until one of the event organizers told the coach I was from the local newspaper and would like to speak to him briefly whenever he was ready. When he finished signing, he turned to me, motioning me to join him.

I introduced myself and told him what a big fan I was. He thanked me and encouraged me to ask whatever I wanted. I focused on his faith and perseverance and he spoke like a man who loved talking about a God he loved. After several minutes, he asked what else I’d like to know and I paused, telling him I didn’t want to monopolize his time — there were several others hoping to speak to him, too, prior to the banquet.

So I asked a few more questions, trying to sound professional while grinning ear to ear. I wrapped it up and he asked the professional photographer to take photos of us together. I’ve had my copy proudly on display ever since I got it.

Bowden is not going to live forever in the body he has. Since we never know how much time we have, I know he may not be alive by the time this is printed. But he will be alive, no doubt. To borrow and amend a quote from Dwight L. Moody …

“Some day you will read in the papers that [Bobby Bowden] is dead. Don’t you believe a word of it! At that moment I shall be more alive than I am now.”

I am happy to have had the opportunity to meet a “hero” of mine, but I am very much aware that every human hero is just that — human. No one is perfect except Jesus.

And every time I talk to Him, I know His heart toward me is: “This is your time. Take as much as you want. I’m all yours.”

One day Bobby and I will each meet Jesus face-to-face, our shared hero.

I don’t know who your hero is, but if you’re curious, I’d be happy to introduce you to mine.