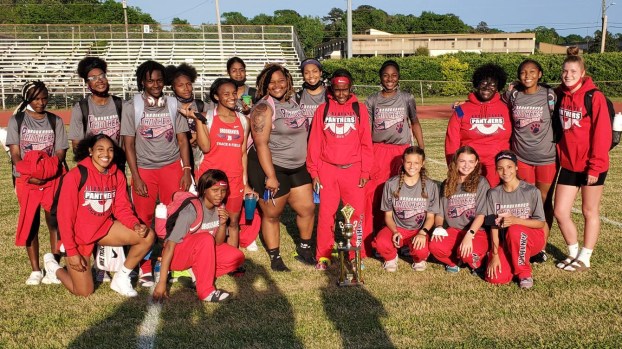 Photo submitted / Members of the Brookhaven High girls' track and field teams pose with their trophy after sweeping first place at the Region 3-5A meet. Next up for BHS is the 5A South State Meet hosted by Hattiesburg High Thursday. 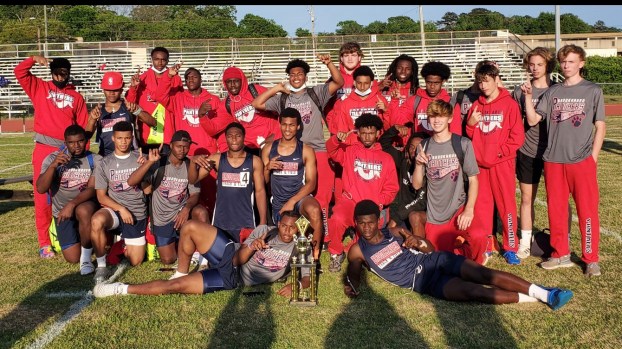 Photo submitted / Members of the Brookhaven High boys' track and field teams pose with their trophy after sweeping first place at the Region 3-5A meet. Next up for BHS is the 5A South State Meet hosted by Hattiesburg High Thursday.

The Brookhaven High track and field teams kept their march through the postseason moving last week as they captured the Region 3-5A championship in boys’ and girl’s competition at Hughes Field in Jackson. The Panthers had also previously swept both titles at the Division 5-5A meet earlier in the month.

Next up for BHS is the MHSAA 5A South State Meet hosted by Hattiesburg High. The meet was originally scheduled to be held Saturday, but a chance of rain necessitated moving South State up to Thursday, April 22, at 3 p.m.

BHS also swept the girls’ 4×400 and 4×800-meter titles as well. Frazier, Johnson, Syllia McCalup and Kortne Nelson are on the 400-meter team while Stovall, McCalup, Jasmine Robertson and Kemiya Crockett make up the 4×800-meter relay group.

On the boys’ side of things, the Panthers continued to dominate distance events as they got first place finishes in the 800-meter (Grayson Childress), 1600-meter (Jake Thompson) and 3200-meter (Trey Knott) races.

The Panthers also won three of the four relay events. The 4×400-meter team that won the title is made up of Nathan Lewis, Xavier Gayten, Elijah Kennedy and Javonta Stewart. Gayten and Stewart pair up with Jalin Brown and Kenan Quinn for the 4×200-meter team which finished second in their race, less than a second behind Jim Hill.

The 4×400 and 4×800 teams were also tops in their respective races. The 4×400-meter team is Gayten, Quinn, Jacquez Smith and Jaden Watson. Smith, Childress, Thompson and Collin Kellum make up the 4×800-meter team.

In the field events Brookhaven got first place finishes from Quintaye Bates in the long jump and Stewart in the pole vault.