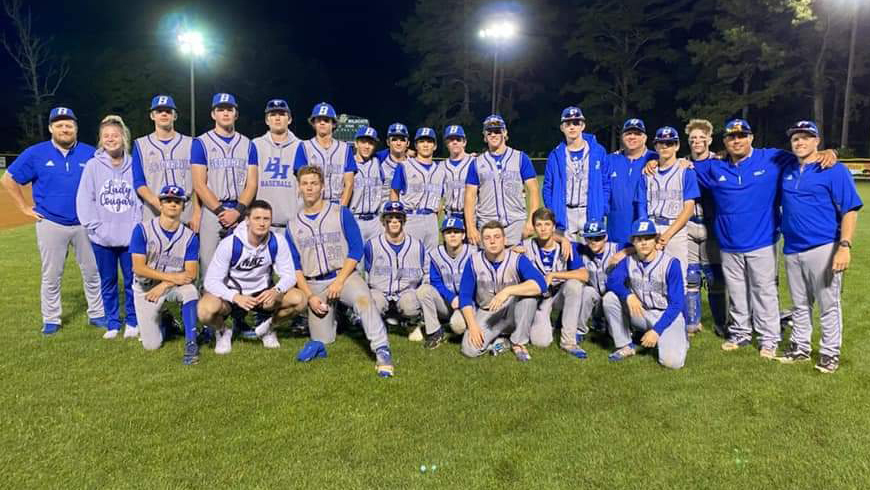 Photo submitted / Brookhaven Academy is on to the first round of the MAIS 4A playoffs after their dramatic district clinching win at Silliman Institute Monday night. The Cougars will host the St. Aloysius Flashes for game two of their playoff series Friday at Williams-Gillis Ballpark.

Monday night in Clinton, Louisiana, the Brookhaven Academy Cougars snatched a District 4-4A championship from the closing jaws of defeat with a 4-3 win over Silliman Institute.

Down to their final out of the game and trailing 3-1, the Cougars put together the type of rally that boys will be talking about long after they are men.

A Michael Watts walk got the first BA runner aboard and Watts then moved to second on an error that also gained Samuel Evans first base.

With Watts at second, Evans at first and two away — junior Caston Thompson stepped to the plate for BA and roped an RBI single that scored Watts and cut the lead to 3-2. The hit came with two strikes in the count.

Senior Dylan Fortenberry followed that with a double of his own that scored Evans and Thompson for the deciding run.

Silliman had won the first matchup of the day between the schools 8-7, giving BA their first district loss of the season. Last week BA trounced Silliman 9-2 in Brookhaven, which was the first division loss of the year for the Wildcats.

That set up a winner-take all matchup in the Monday nightcap.

In the bottom of the seventh of game two, SI got its first batter on via a walk. That runner, Weston Wales, then moved to second via a sacrifice bunt.

Senior pitcher Collin Waldrop was facing the heart of the Silliman order and got a huge boost when catcher Easton Boyte caught Wales trying to steal third for the second out of the inning. After one more walk, Waldrop forced a pop out that ended the game and gave BA the district title.

“Down to our last strike at one point, but the boys found a way,” said BA coach Caleb Upton of the comeback. “Dylan’s last at bat was one of the biggest hits I’ve ever witnessed.”

Waldrop pitched the win in the finale, striking out three, walking five and giving up two unearned runs on two hits over four innings. Judson Griffin started and went three innings for BA. He gave up four hits, one earned run and struck out three while also walking three.

Griffin had also pitched the final 2.1 innings of the game one loss.

A solo home run by Trenton Tarver in the fourth inning had been the only offense for BA prior to the final at-bat.

Silliman trailed 7-6 in the opener before a two-run bottom of the sixth gave them their final lead. Senior leadoff batter Gavin Brogden homered in the opener and drove in three runs. Griffin also drove in two runs for BA and Boyte had one RBI as well.

Thompson took the loss on the mound as he threw 103 pitches in 3.2 innings. He struck out four, walked six and gave up three earned runs and three unearned runs on four hits.

The MAIS playoffs have an immediate start as BA (15-7) was scheduled to play at St. Aloysius (16-9) in Vicksburg for the series opener Tuesday. Game two will be at Brookhaven Academy Friday and if needed, game three will follow immediately afterwards.

The winner of the BA/St. Al serios then moves on to face the winner of Simpson Academy and Oak Forest Academy. The Cougars swept division foe Oak Forest in the regular season and split their two games against Simpson.