Teen with rare condition has heart to help others 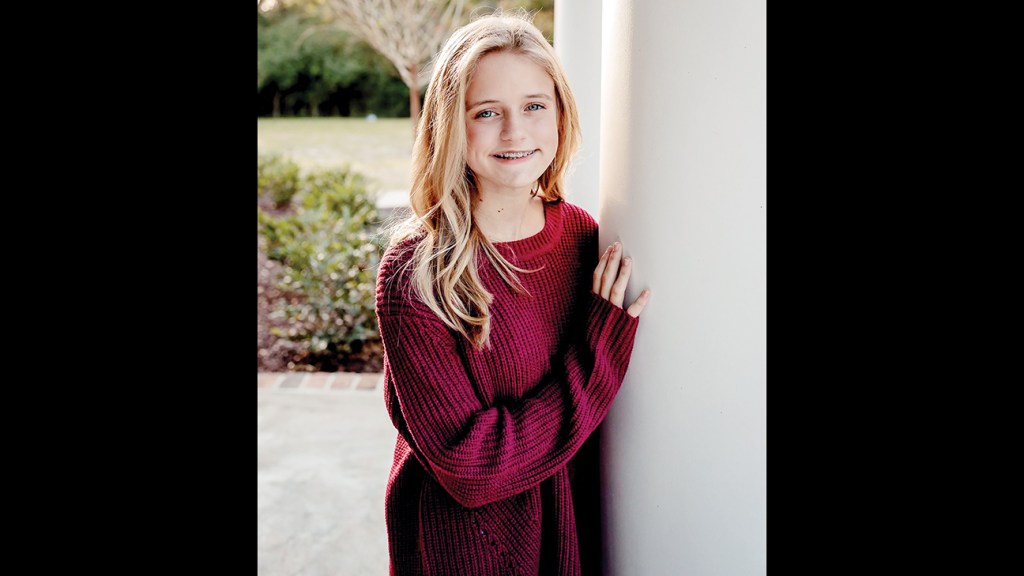 For Bogue Chitto eighth-grader Aiden Martin, the most frustrating part of having Friedrich’s ataxia is watching her friends do things she cannot do.

Martin, 13, was diagnosed in March 2020 with the degenerative neuromuscular disease more commonly known as FA. There is no cure and, as yet, no treatment.

Doctors also don’t know what causes FA, other than it is an inherited condition. It is very rare, and both parents must be carriers. Even then, there is only a 25% chance their child will have the condition.

Neither of her parents were aware they carried the FA gene because no one in either family had ever been diagnosed with the condition. If Aiden has children one day, there remains only a 25% chance any of them would develop FA.

“Aiden was always ‘clumsy,’” said mom Ashley Martin. “But she started having falls, not tripping — just falling — so we were concerned.”

Pediatrician Amber Martin — no relation — listened to what Ashley and her husband Tim had to say, and paid close attention to Aiden’s symptoms. When possibility after possibility was ruled out as potential causes, such as a family history of multiple sclerosis, Dr. Martin pushed for more tests to get the pre-teen and her parents some answers and help.

Aiden has taken the diagnosis in stride.

“I basically just take it day by day, as it comes,” she said, noting her frustration at not being able to participate in sports with her friends, “because I can’t walk the best and (because of) my fatigue.”

She has to pace herself, sitting or lying down often due to the fatigue, her mother said.

“Her bones are not more brittle, but the fall risk is greater so she could potentially get hurt or break a bone,” Ashley said.

The condition’s symptoms become progressively worse over time, though how bad and how quickly varies from case to case.

“I usually just have to deal with it and go on,” Aiden said.

Just one month prior to the FA diagnosis, doctors determined she had scoliosis, a bent spine, requiring her to wear a brace 18 hours each day. The scoliosis is likely a result of the FA, which has affected her balance, coordination, energy level and her heart. Her current list of doctors includes specialists in neurology, orthopedics, cardiology, pulmonology, orthodontics, ophthalmology and physical therapy. She will also begin to see a psychologist soon, because although the condition affects every part of the body except the mind, processing and dealing with the symptoms can be difficult.

“No one really understands how I feel,” she said.

“Even so, she’s always upbeat, and has a pretty dang good support system,” Ashley said. “I think she’s been most surprised by how people care about her.”

Aiden smiled and nodded as her mother talked about her friends offering words of encouragement and making sure she has whatever assistance she needs when they are around.

A rising freshman at the home of the Bobcats, Aiden is involved in the Beta Club and keep basketball records for the junior high and high school teams. She’s also involved in the Mt. Moriah Baptist Church youth group. She said each group has been very supportive and encouraging to her.

Groups have sponsored fundraising efforts to help pay for Aiden’s medical expenses and offset some of the cost of remodeling the Martins’ home to make areas more accessible to her when she occasionally needs to use a wheelchair. A benefit account has been established at Pike National Bank for donors to contribute to, as well as a PayPal account — sashy16@yahoo.com.

As a nurse, Aiden’s mother said she switches back and forth between “mom brain” and “nurse brain,” where she is trying to help her daughter as a medical professional while also protecting her little girl.

“There is a drug that has been shown to slow progression (of FA),” Ashley said, “but the FDA wants another trial. That could take years.”

Aiden has participated in one drug trial but was dropped due to her heart condition. She plans to take part in another later this year, if she is able.

One thing is for certain — she has no plans to let FA dictate what she does with her life.

“I want to be an anesthesiologist,” Aiden said. “I’ve always wanted to be able to help people, and I’m getting pretty familiar with the medical field.”