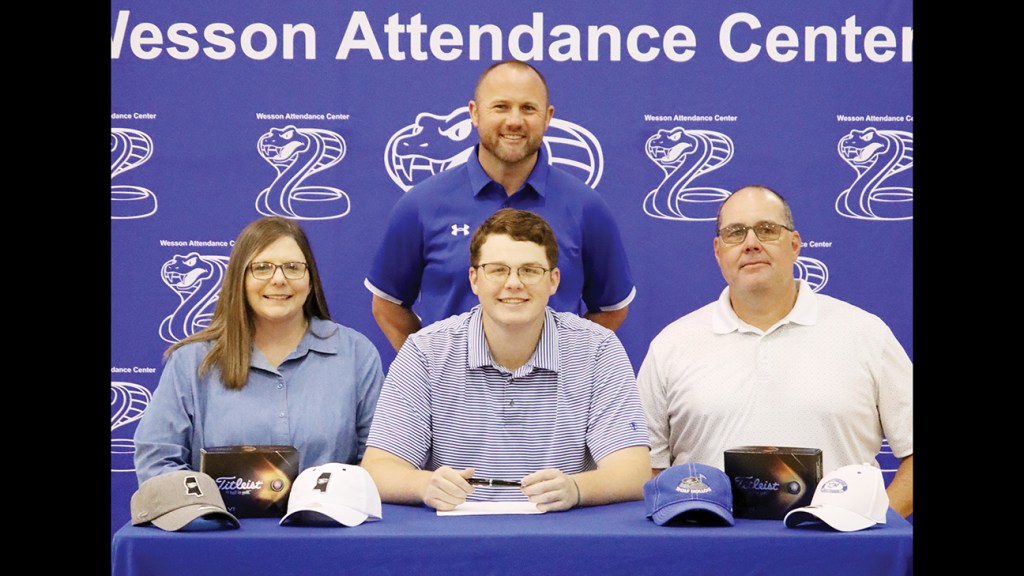 Photo by Lisa Smith Wesson senior Chandler Byrd recently signed a letter-of-intent with the Copiah-Lincoln golf program during a ceremony in the school’s library. Seated with Byrd are his parents Bridgett and Robert. Standing is Wesson golf coach Bobo Douglas.

There will be a high level of familiarity for Wesson senior Chandler Byrd as he makes the transition to college golfer.

Next year, Byrd will play and train on his current home course, Wolf Hollow, as he recently signed a letter-of-intent to continue his career at Co-Lin.

“Chandler is bringing a lot of experience as he’s played every year for us,” said Wesson coach Bobo Douglas. “He’s been a leader this year for our program and I’m proud of his work. I look for him to continue to have success on the next level.”

That desire to continue improving is a big reason that CLCC golf coach Allen Kent was drawn to Byrd.

“Chandler had worked hard and is a solid player,” said Kent. “He works the ball right to left and does a good job with that. He’s working towards being able to play a cut or fade with consistency. Once he is able to accomplish that, it’s will make him a more complete player. We’re really looking forward to having him join our team.”

Kent is in his first leading the CLCC golf team. Co-Lin recently finished fourth in the MACCC state tournament at Briarwood Golf Club in Meridian.

Next up Co-Lin is the NJCAA District D Championship at Reunion Golf and Country Club on April 26-27.

The Wolves have a Wesson product on their team this season already in freshman Ty Brewer. Lawrence County product Ty Nelson shot the low combined total of 153 to lead Co-Lin over the two days of state tournament play.