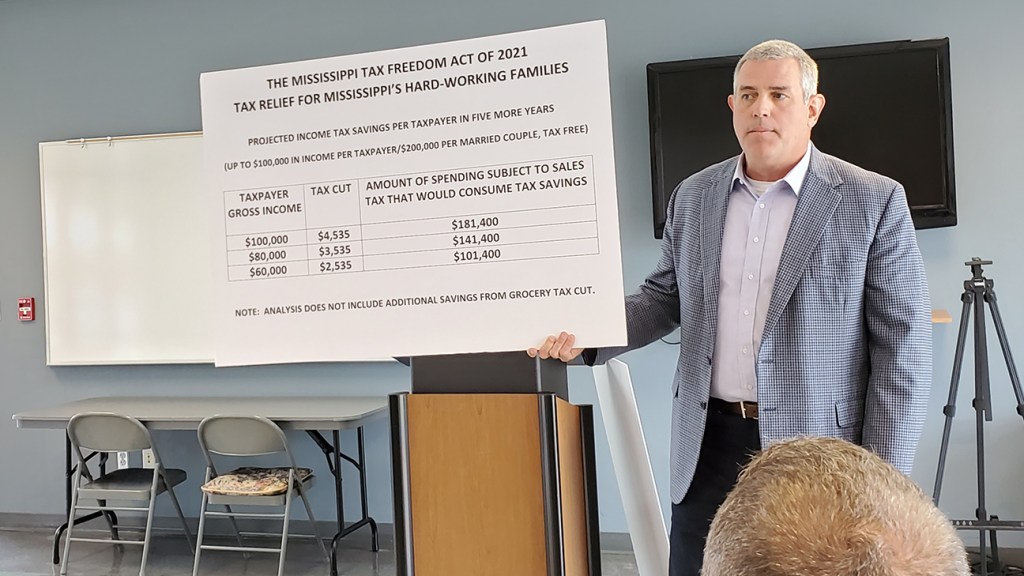 With roots in Brookhaven — his maternal grandparents were residents of the Homeseekers Paradise and a few of his family members were Whitworth College graduates — Gunn chose the city to be the first stop in a tour of municipalities across the state to discuss this year’s failed attempt to phase out income-based taxes and the plan to reintroduce the act with new support in January.

The Mississippi Tax Freedom Act of 2021, House Bill 1439, was authored by Gunn and introduced in the recently-ended 2021 Regular Session of the Legislature. The bill was referred to the Ways and Means Committee, passed the House as amended and was transferred to the Senate, where it died in the Finance Committee.

“Becky Currie and Vince Mangold were both staunch supporters of this measure,” Gunn told the gathering of politicians and business people at the Jimmy Furlow Senior Citizen Center. “Now I’m out to spread the gospel of eliminating income tax, make some converts and develop some disciples who will then go out and spread the gospel, too.”

Gunn said he started with the premise that eliminating the income tax is a good thing. When people have more disposable income, they tend to spend it — so putting cash back in taxpayers’ pockets means they are likely to use it at some point to invest back in the economy by purchasing items.

One-fourth of what the average person uses his or her money for is subject to sales tax, Gunn said. Raising the state’s sales tax from 7% to 9.5% — the same as the surrounding states of Louisiana, Tennessee and Arkansas, and similar to Alabama’s 9.2% — will replace a large portion of what is taken from the state’s revenue by eliminating income tax, Gunn explained. The advantage to Mississippians is that Arkansas, Louisiana and Alabama all have income tax, as well.

The Tax Freedom Act would exempt the first $40,000 of a taxpayer’s income from tax, allowing the person to keep approximately $1,500 they would have paid in income tax to the state. Then in five years, the exemption will be raised to $80,000 for each taxpayer. This will eliminate income-based tax for 80% of the state’s citizens.

The proposal also decreases the grocery tax from 7% to 3.5%, decreasing the burden on individuals and families whose main taxable expense is feeding the family.

The Speaker will visit other cities across the state in the next eight months to garner support among the public for the bill before reintroducing it in the Legislature come January 2022’s Regular Session.

Gunn has published a series of short videos on his Facebook page explaining the act in further detail.

House Bill 1439 and any other Mississippi legislative bill can be researched online at http://www.legislature.ms.gov.