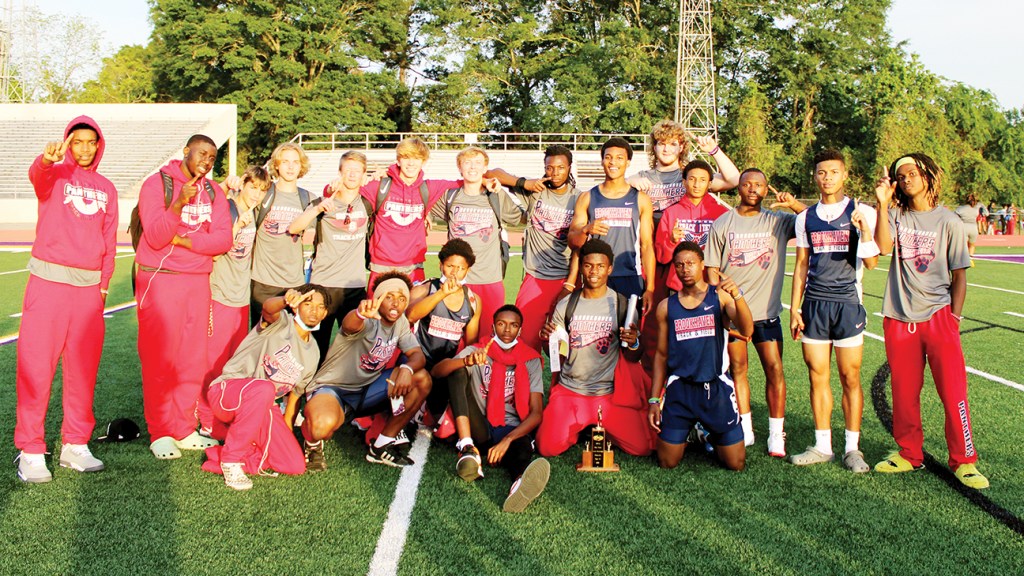 Photo submitted The Brookhaven High boys’ track and field team members pose with their MHSAA 5A South State meet trophy after winning it last week in Hattiesburg. The Panthers will be title contenders again Friday as Pearl High hosts the 5A State Championship.

The 2021 MHSAA track and field season culminates this weekend with the state championship meets at Pearl High School.

Friday in the 5A meet, both Brookhaven High teams will be contenders for their respective team titles. Last week at the 5A South State meet hosted by Hattiesburg, the BHS boys’ team won its side of the competition while the girls were runners-up.

The last time the MHSAA held a state meet — back in 2019 — the Lady Panthers were 5A runners-up and would have been favorites again last year had COVID-19 not canceled the season.

What BHS does well is have competitors spread across every event. They only won one event at the south state meet on the boys’ side, but earned enough points in the sprints, longer races, relays and field events to outpoint Hattiesburg.

Dorsey says Hattiesburg will again among the best teams at the state level as well.

“The Hattiesburg boys are really good, they’ve got participants in the majority of the 18 events and they’ve been really good in the field this year,” said Dorsey. “At this point our kids are one of the final eight athletes in the state for whatever race or event they are in at Pearl. We stress to them that’s a great accomplishment by itself.”

The 4×800-meter relay team was the lone winner for BHS at south state in boys’ events. The team of Jake Thompson, Grayson Childress, Jacquez Smith and Collin Kellum ran a school record eight minute and 40 seconds to take the win.

Jailin Brown of BHS earned a state berth in both the 110-meter and 300-meter hurdles. Childress, Sam Arnold and Trey Knott will all race in the 3200-meter at state. Thompson and Childress will also run in the 800-meter and 1600-meter races while Arnold is a 1600-meter qualifier as well.

Freshman Xavier Gayten will represent Brookhaven in the 100-meter dash.

With the division, region, south state and now state meet taking place over a span of four weeks in April, Dorsey says the message from the coaching staff has been to finish what they started.

“The biggest key we’ve tried to relay to them throughout the season is to focus on the little details,” said Dorsey. “From finishing through the line to, to relay hand-offs or having consistent practice habits that carry over to meets. Both groups have done a tremendous job of doing that throughout the season. The message this week is to go out and compete, focus on those little details and believe in yourself.”

Brookhaven senior Ah’Menya Rancifer is gunning for her third state title in the shot put for the BHS girls’ team. Rancifer edged out Kennedy Curry of Laurel in the south state meet by 4.5 inches.

Rancifer will also compete in the discus at Pearl. Another favorite for the BHS girls’ team is junior Kyja Willis.