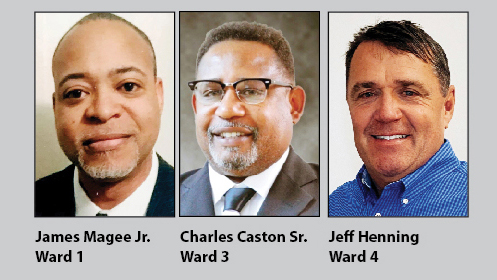 Two Brookhaven alderman seats have been decided and a candidate in a third race advances after the Primary Runoff Election.

Voters in city wards 1, 3 and 4 cast their ballots at their respective polling places Tuesday. Though results will not be official until certified by the Office of Secretary of State Michael Watson May 7, the counts were definitive enough that Lincoln County Circuit Clerk Dustin Bairfield was confident in declaring winners.

Magee said he was thankful to God, his family and all those who exercised their right to vote in the primary runoff.

“You guys have put in countless hours of canvassing, phone calls, etc.,” he said. “I just want to thank everybody at this moment.”

Magee’s plan is one of inclusiveness and cooperation, he said.

“I will be working in unison with all the candidates of Ward 1 to continue the efforts to progress this ward forward, ‘Working together to build a better community’,” Magee said.

Caston said it was faithfulness and focus that helped him win the runoff.

“I want to thank God, who gave me favor, and the voters,” he said. “It came from a foundation of common sense, listening to the voters’ concerns and issues and not making promises that I can’t deliver.”

Working together with all the ward’s voters will bring change to the city, the pastor said. His focus will continue to be going door-to-door in the area, focusing on those who did not vote for him in order to listen to their concerns and try to get them on board as his supporters.

“This is a Homeseekers’ Paradise for all Brookhaven residents,” Caston said. “There is still an election June 8 and I’m still asking all the voters to come out and cast their votes. ‘We build better together’.”

Smith said he was disappointed that his quest to be alderman had come to an end.

“I don’t feel sad for myself, but I do for my community,” he said. “It’s been a struggle and as long as our community continues to allow lack of knowledge and insecurity to control our future, I guess we’ll probably continue to be in opposition of our own best interests.”

Smith said he felt he had run a good, strong campaign, working hard and being honest with constituents.

“I did my best and I’m satisfied with that,” he said. “It’s time now to turn a new page in a new chapter in our community to try to move forward and try to make some progress.”

Smith said he met a lot of new people and new friends during his campaign, and salutes all who supported him. He said he will now focus his attention on his non-profit to try to achieve some of the goals he has for the city, and spend some quality time traveling with his wife.

Caston will advance to face Republican Troy Douglas in the June 8 General Election.

Ward 4 presented the closest race in Brookhaven, as Republicans Barbara Nell Davis and Jeff Henning ended the day with fewer than 10 votes separating them. Henning took 303 votes, 50.58%, and Davis followed with 294 votes, or 49.08%. Two votes were write-ins.

“Thank you to all those who helped and supported me, voted, handed out flyers, talked to their neighbors and aunts, uncles,” Henning said. “It’s a prime example of every vote counting. I hope people won’t take it for granted and will get out and vote in the future.”

“I want to congratulate Barbara on a great campaign and I think we’ll both be friends. I’ve spoken with her and we’ve both expressed that. You can be opponents and still get along,” he said.

“I want to thank my family and friends for their support and votes,” Davis said. “Congratulations to Jeff Henning. I wish him well as he takes on the position of Alderman Ward 4.”

“I will be meeting in the next few days with (current Ward 4 alderman) Jason Snider to discuss the projects he was working on and will not be able to finish, and plans he has to help Ward 4 continue forward. I will also be speaking with my Ward 4 constituents in the next few days and see what their needs and concerns are and get my feet wet and go to work.”

Henning said he will also be out in the community working to help fellow conservative candidates get elected.

The general election will be Tuesday, June 8, in all wards of the city. Polling places will be the same as those of the primary.

Voter registration for the general election begins Monday, May 3. The in-person absentee voting deadline for the election is noon, Saturday, June 5.

All municipal officers, whether reelected or newly elected, will begin terms July 1.