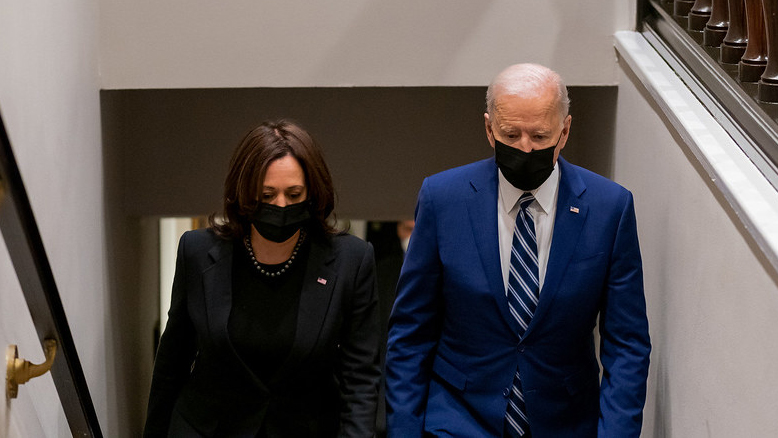 Photo by White House/Cameron Smith / Vice President Kamala Harris and President Joe Biden walk up the stairs in the West Wing of the White House in March 2021.

“I respect what good intentions President Biden may have behind the ideas covered in his joint address to Congress,” Hyde-Smith said, “but I believe the president has set a misguided course to expand federal government intrusion into almost every aspect or our lives.”

Guest said he hoped Biden would follow through with a commitment to work with Republicans and “seek to reign in Nancy Pelosi and the Progressive wing of his party that has shown no desire to work across the aisle.”

Hyde-Smith said she is willing to work with anyone in Congress to address the serious challenges of economic downtown, unacceptable jobless rates, aging infrastructure and unrelenting enemies.

“But I do not believe a radical, big-spending, big-government agenda will unify a nation working to rebuild from the pandemic,” she said. “In his first 100 days, the president has asked for more than $6 trillion in new spending. That’s an astounding amount of tax dollars and debt.”

“As a fiscal conservative, I am deeply concerned with the cost of the programs the president spoke of,” he said. “These programs would cost trillions of dollars and would require the president to raise taxes on small businesses and the middle class. These tax increases would come at a time when we are still recovering from an economic crisis caused by COVID-19.”

“And I, for one, oppose anything that infringes on Second Amendment rights, expands abortion or undermines our election laws,” she said.

“Americans want solutions on immigration, healthcare, infrastructure and the economy,” said Guest. “We will only be able to find these solutions if the president follows through on his promises and begins to govern in a bipartisan fashion and not through the use of budget reconciliation and executive orders.”

“Going forward, I hope we will set a course correction that allows us to work together on polices that respect individual liberties and freedoms as defined by the Constitution,” said Guest. “In doing so, we can improve the ability of our citizens to achieve the American dream.”