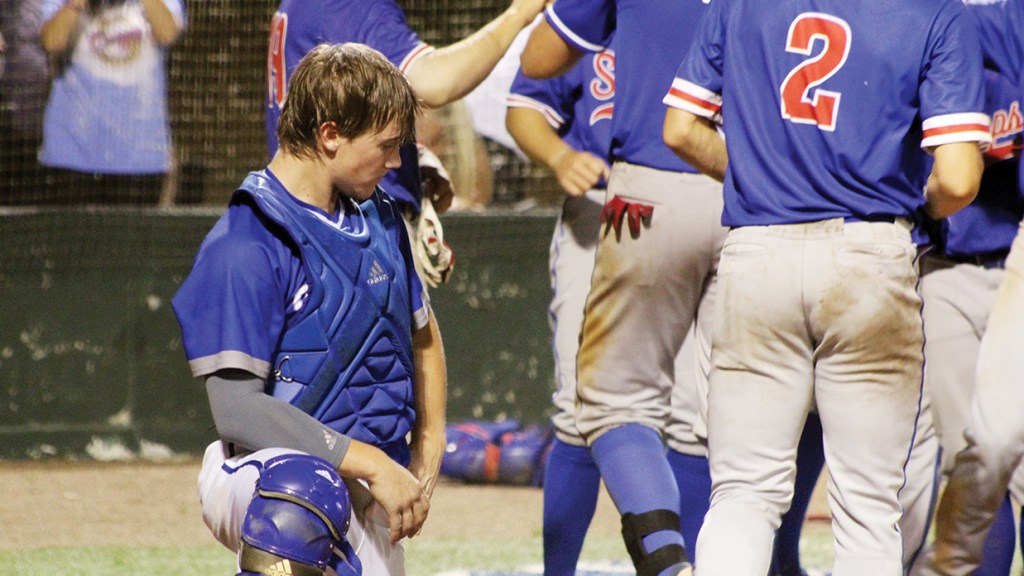 Photo by Cliff Furr Brookhaven Academy junior catcher Trenton Tarver waits for Simpson Academy to clear the plate as they celebrate a grand slam in the seventh inning Thursday night. Simpson won the MAIS 4A Playoff Series 2-1 and will next meet Hartfield Academy in the state semifinals.

Thursday was a rollercoaster of emotions for the Brookhaven Academy baseball fans that packed Williams-Gillis Ballpark to see their Cougars face visiting Simpson Academy in the MAIS 4A second round.

Needing to win the first game of a possible two game set, BA battled back and forth with Simpson before taking a 6-5 win in the seventh inning via a Trenton Tarver walk-off RBI single.

That would be the final moment of joy though as SA scored three runs in the top of the second in the deciding third game of the series to seize control. The visiting Cougars pile dup 15 hits and won the finale going away by a 15-4 final.

Tuesday in the opener played in Mendenhall, the Cougars led 5-3 before Simpson scored six runs in the fifth to get a 9-5 win.

In game two Thursday, which started at 4:30 p.m., BA came out with their foot on the gas and jumped up 5-1 after four complete innings. Simpson chipped away to tie the game at 5-5 in the top of the seventh.

A single by senior Collin Waldrop in the bottom of the seventh got the BA rally started. Waldrop then scored from second on the game winner by Tarver.

Junior Caston Thompson pitched the win for BA as he struck out two and gave up eight hits in six innings. Easton Boyte threw the seventh inning for BA as the pair combined to throw 120 pitches in the win.

Simpson Academy (25-9) and coach Kelly Greer used two pitchers in the opener as well, but their staff worked through the BA lineup in just 88 pitches.

That same patient at the plate approach was how Simpson started game two of the day. Boyte drew the start in the series finale and went five innings while giving up six earned runs on eight hits. Avery Griffin and Waldrop also pitched in relief.

Simpson Academy moves on to face Hartfield Academy in the 4A South State series next week. Hartfield is 33-2 and has won 33 straight games.