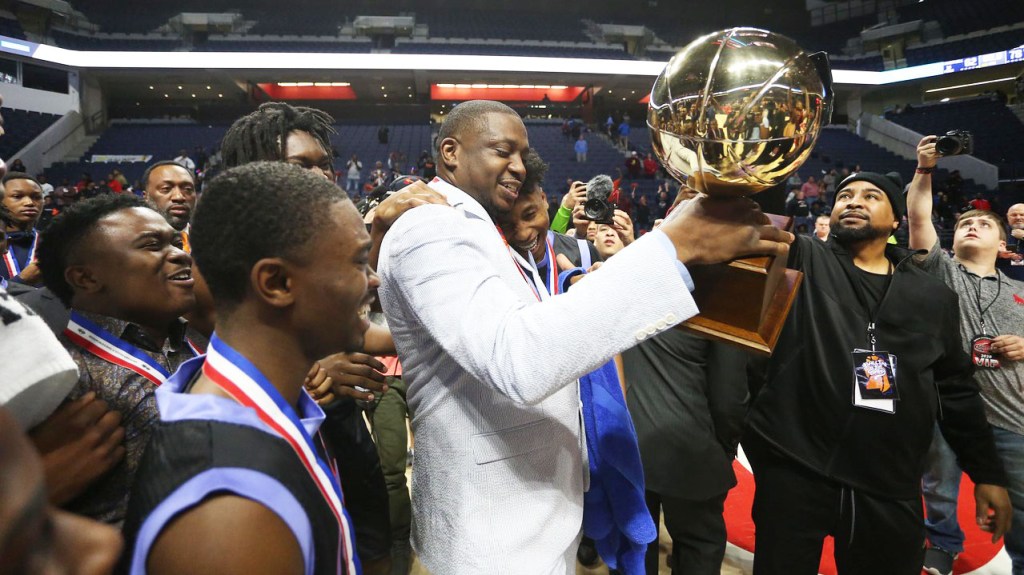 Photo by Keith Warren/MHSAA Callaway players surround coach David Sanders after the Chargers beat Center Hill for the 2020 5A State Championship in Oxford. Sanders will hope to continue that record of success as he's now been named the new head men's basketball coach at Copiah-Lincoln Community College.

Thursday night the Copiah-Lincoln board of trustees approved the hiring of David Sanders to lead the Wolves men’s basketball program.

Sanders is a name familiar to basketball fans throughout the state as a player and coach.

He comes to Wesson after winning three state titles over eight seasons at Callaway High in Jackson. His combined record at Callaway was 182-40 during that time.

Sanders inherited a championship program at Callaway when he replaced the man who coached him in high school, Wayne Brent.
Brent was hired by Jackson State and Sanders came over to replace him after coaching the previous three seasons at Northwest Rankin.
Coming off two straight state championships under Brent, Sanders kept the Chargers rolling by winning MHSAA 5A titles in 2014 and 2015. Those teams were all led by Malik Newman, one of the best prep scoring guards in state history.

The next title for Sanders came in 2020 when his team defeated Center Hill at Ole Miss for 5A gold again.

The applicant pool for Co-Lin was large and the school ultimately interviewed a strong group of candidates.

In that pool of interviews were Division I assistant coaches, former community college head coaches and other state championship winning high school coaches.
What put Sanders on top of the list?
“Coach Sanders is someone that commands attention when he’s speaking,” said Co-Lin athletic director Bryan Nobile. “He’s a proven winner and a leader. His passion really shined through during the interview process and he possess all the qualities we were looking for in a new head coach.”

As a high school senior Sanders was Gatorade Player of the Year for a Provine High team that finished 37-1 and 5A state champs.
He played one season of junior college basketball at Tallahassee Community College before moving on to Ole Miss.

In Oxford he rejoined his former Provine teammates Justin Reed and Aaron Harper to form the “Provine Posse.” Brenet was also an Ole Miss assistant coach for those teams.

His first season in Oxford was capped by Ole Miss making the Sweet Sixteen in the NCAA Tournament.

Sanders will actually now coach in the MACCC against two of his former teammates from that Sweet Sixteen team in 2000-2001.

In a release by the school announcing his hiring, Sanders says the job is a dream come true.

“I am extremely humbled and blessed to have the opportunity to lead Copiah-Lincoln Community College as head basketball coach,” said Sanders. “This is the fulfillment of a dream that has been 14 years in the making. My family and I can’t wait to get started on this wonderful new journey.”

“An experienced head coach, David Sanders brings leadership, excitement and competitiveness to Co-Lin,” said Co-Lin president Dr. Jane Hulon Sims in the hiring release. “I am thrilled to welcome Coach Sanders and his family to Co-Lin.”