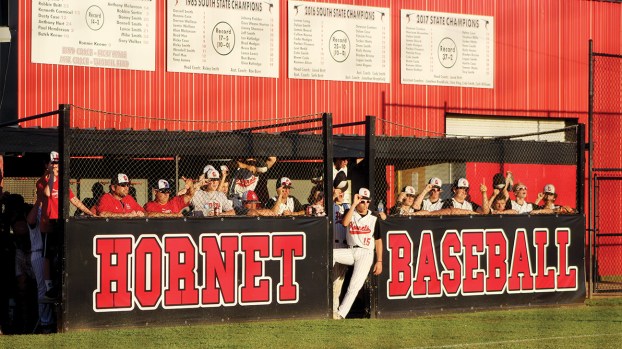 Photo by Cliff Furr / Members of the Loyd Star baseball team try to work up some good karma for one of their batters Thursday against Enterprise-Clarke. 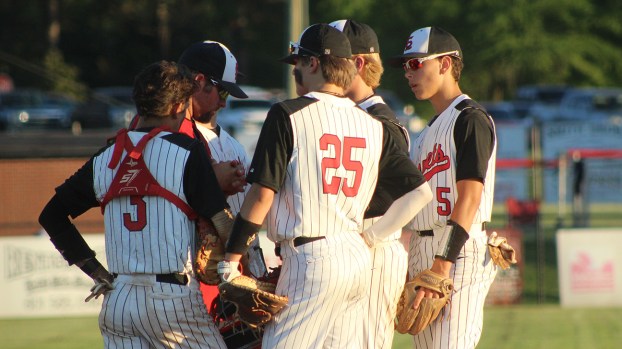 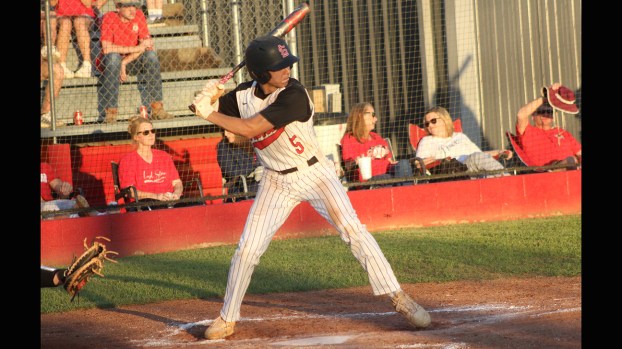 A heads-up play by catcher Casen DeHart on the base paths came at the best time Thursday as Loyd Star (21-7) held on for an 8-7 win over Enterprise-Clarke (19-12) in the MHSAA 2A playoff second round opener between the schools.

Entering the bottom of the sixth the game was tied at 5-5 as each previous half inning had a big play from either team.

Enterprise was riding some momentum after getting two runs in the top of the frame to knot things up.

Carter Holcomb got the Loyd Star side of the sixth started with a single to get aboard and then moved up to second via a DeHart walk.

Senior Harrison Hux doubled to score Holcomb as DeHart held up at third.

The next batter for Loyd Star was senior Wyatt Hodges. Hodges grounded out to first and some confusion on the base paths left DeHart and Hux standing four feet apart — one on each side of third.

Instead of throwing to one his teammates and trying to catch Hux in a rundown back to second — but also potentially giving DeHart a free pass at home — the Enterprise first baseman instead ran towards third base with the ball in his glove.

That allowed Hux to make his return to second and that’s when things got a little weird.

So, with the ball around second base and everyone kind of looking at each other to figure out what would happen next, DeHart took off towards home.

He slid in head first across the plate, before Hux was then thrown out at third.

The three-man umpiring crew conferred, ruled that time had not been called and that the run counted. The inning was over as the play on Hux was the third out.

The large partisan, red-clad crowd of fans lining the fences of Smith Field had no idea how much that run would be needed.

With one away in the top of the seventh Enterprise had runners on first and third.

The Bulldogs pulled to within one when sophomore Jake Shelby scored on a wild pitch.

Junior southpaw Dawson Hester then got his two biggest outs of the night to preserve the win and ensure his team wouldn’t have to pick up their bats again in the bottom of the seventh.

Hester got a strikeout and a flyout to end the game and give his team a 1-0 series lead.

Hester gave up eight hits and four earned runs over seven innings. He threw 95 pitches and struck out six while walking just one batter.

“Dawson gutted it out for us tonight,” said Loyd Star head coach Jared Britt. “We needed a complete game from him, and he was facing a team that really puts pressure on your defense. We needed to play better defense behind him than we did.”

Hester was perhaps also a little leg-weary after walking 36 holes of golf earlier in the week at Wolf Hollow for the state championship winning Loyd Star golf team.

“That run scored by Casen in the sixth ended up being pretty big for us,” said Britt. “I saw that they had kind of stopped playing and no one had called time, so I told him to go. Earlier in the game he gave us a huge lift when he stole home and that one was all him. He just saw an opportunity and took off.”

DeHart stole home in the fourth after reaching via a double. His dash to the plate caught the Enterprise catcher and pitcher unaware and was the lone Loyd Star run of that inning.

Enterprise took a 1-0 lead after one inning, but Loyd Star answered back with four runs in the second as two runs scored via a DeHart double.

On the night the sophomore DeHart finished with two hits, two RBIs and two runs scored. Hux had a team-high three hits while Hodges, Holcomb and Colby Terrell all also hit safely for LS.

John Carter Kennedy took the loss on the hill for the visiting Bulldogs.

“It’s a feeling of relief to get this one because they’re a solid team,” said Britt. “I’d said they’d be scrappy and that’s truly how they play. They put the pressure on you to make plays and match their effort. Proud of my guys for finding a way.”