Loyd Star facing Puckett in 3rd round of MHSAA 2A playoffs 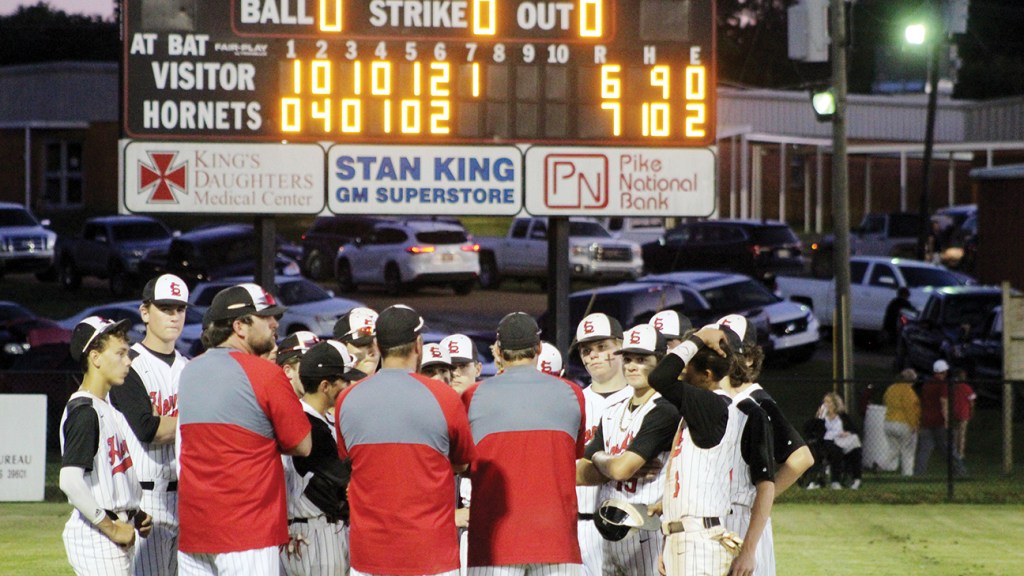 Photo by Cliff Furr The Loyd Star Hornets will be back on Smith Field Thursday as they host Puckett High for the opener of their MHSAA 2A playoff series at 6 p.m. Both teams are 4-0 thus far in the postseason.

It’s a matchup of two teams that have yet to lose a playoff game when Loyd Star tangles with Puckett this week in the MHSAA 2A baseball playoffs.

Both schools went 2-0 in the first and second rounds and meet in the quarterfinals with a South State Championship Series berth on the line.

Game one is scheduled for Thursday at 6 p.m. on Smith Field at Loyd Star. Puckett will host game two Saturday at 6:30 p.m. in Rankin County.

The second game of the series was moved back one day as Puckett is holding its graduation ceremony Friday night.

If a third game is needed, it will be played Monday at 6 p.m. back at Loyd Star.

The Hornets (22-7) and coach Jared Britt are winners of nine straight as they finished out their second-round matchup Friday at Enterprise-Clarke by claiming a 3-1 win.

Every run that Loyd Star needed to get the win came in the first inning as the Hornets quickly jumped up 3-0 and gave one run themselves in the third.

Senior Co-Lin baseball signee Wyatt Hodges drew the start on the mound Friday but threw just one inning after striking out two on 20 pitches in the first.

Hodges was ejected with Loyd Star batting in the top of the second. He’d hit a two-out double to get on base and then tried to score from second on a Dawson Hester single.

The throw beat Hodges home and after not sliding and colliding with the Enterprise catcher, he was tossed from the game.

Forced to sit the next seven innings by rule, he’ll be available after two innings in the opener against Puckett.

Junior Riley Easterling took over on the bump after that and was magnificent as he struck out 11 and gave up just three hits and one unearned run on 90 pitches over six innings.

Freshman Nathan Mills took over for Easterling at shortstop after he was called in to pitch.

Loyd Star leadoff batter Casen DeHart got aboard after being hit by a pitch to start the game Friday night. DeHart then moved up to second after an error from the Enterprise catcher.

A Hodges single moved DeHart up to third.

With runners at first and third, Loyd Star cleanup Dawson Hester laid down a bunt that scored DeHart, moved Hodges to second and got himself safely aboard.

Easterling then singled to score Hodges. The final run of the inning and the game for Loyd Star came later in the frame when Carter Holcomb drew a bases loaded walk that plated Easterling.

LS finished the night with eight hits as Hodges and Hester had two apiece while Easterling, Holcomb, Connor Cunningham and Caleb Smith had one hit each.

Puckett (18-8-1) moved on to the third round by sweeping Bogue Chitto last week in two games.

When the schools met Thursday in the series opener, Puckett threw their sophomore ace Matthew Boszor.

Boszor has struck out 77 this season in 44 innings, but coach Gareth Sartin’s BC Bobcats ran him from the game in four innings. Boszor gave up four hits, four runs (two earned), struck out six, but walked five while throwing 106 pitches in four innings.

Puckett outhit Bogue Chitto 14-8 in the opener as the Bobcats were also not helped by a total of five errors in the game.

The second game at Bogue Chitto was a closer affair Friday night. The Bobcats jumped up 3-0 after one only to see the Wolves get two runs back in the top half of the second inning.

The Wolves tied the game up at 3-3 in the fifth and took a one run lead the next inning before two more insurance runs in their last at bat produced a 6-3 final score.

The game was actually a combined no-hitter for Puckett starting pitchers Waylon Sebren and Grant Allen.

Sebren drew the start and struggled with walks which helped produce the early BC offense.

In four innings, he threw 109 pitches and gave up three earned runs while striking out 11 and walking 10.

Grant Allen came on in relief and thew the final three innings for Puckett. Allen struck out eight and walked three on 61 pitches.

Britt says Boszor and Sebren give the Wolves a strong 1-2 punch on the mound.

“They’ve definitely got two very solid arms that have pitched well for them all year,” said Britt. “They hit the ball well and have a big kid in the middle of the lineup that has a lot of power.”

The “big kid” Britt is speaking of is senior Price Tullos. On the season Tullos has a team-high 36 RBIs, eight doubles, one triple and eight home runs. He’s batting a team leading .493 on the year.

DeHart lead the Hornets in batting average as he and senior Harrison Hux form a potent combo as leadoff and second batters for Britt.

The pair have also combined to strike out just 17 times in a total of 222 plate appearances between them.

Hester, Hodges and Easterling give Britt a strong three-man rotation should the series stretch out that long.

Junior Craig Bass comes out of the pen and has thrown 19 innings thus far in 2021. After him there isn’t a player on the team that’s tossed more than one inning on the mound this year.