BHS sends several Panthers to podium at 5A state meet 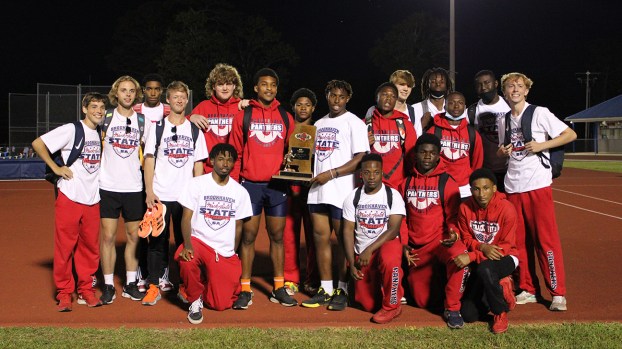 Submitted photo Members of the Brookhaven High boy’s track and field team pose with their trophy after finishing as runners-up at the MSHAA 5A state meet. 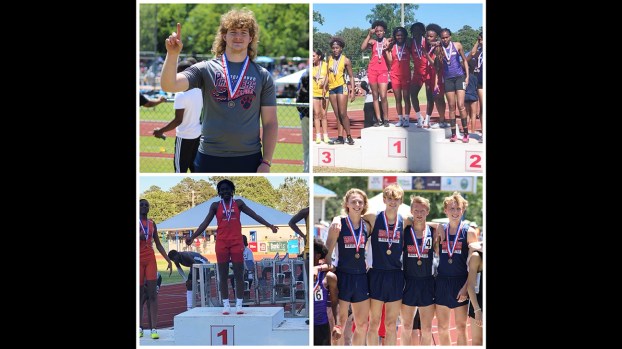 The Brookhaven High Panthers didn’t quite reach their team goal of winning championships at last week’s MHSAA 5A state track and field meet — the boys were runners-up to Hattiesburg and the girls finished third — but there was plenty to be proud of as Ole Brook athletes occupied spots on the tri-level winner’s podium throughout the day.

“I am extremely proud of both teams as they accomplished great things this year,” said Dorsey. “Especially the class of 2021 for dealing with the distractions of COIVD and still leading the teams to success.”

The Panthers were favorites in their distance races on the boys’ side as the state championship cross-country program has athletes that also run for BHS track.

The 4×800-meter relay team of Collin Kellum Jake Thompson, Grayson Childress and Sam Arnold lived up to those expectations by winning a championship over their traditional cross-country rival, Saltillo High.

Childress and Thompson were also second and third respectively in the 800-meter race and the 1,600-meter race, finishing both times behind senior Chrisitan Balcer of East Central High School.

Balcer, a track and cross-country signee for Mississippi College, also won the 3,200-meter race. Brookhaven High junior Trey Knott finished second behind him as Arnold was the third-place finisher in the race.

Junior Kyja Willis also had a huge day for the Panthers, winning the 200-meter sprint and finishing second in the 100-meter dash.

Willis has been one of the fastest girls in 5A track all season.

“People in the track community ask me where Kyja came from because they’d not heard about her before this season,” said Dorsey. “I tell them she’s been here, but she didn’t get to show her talents last year because of COVID cutting the season short.”

Willis is also a Daily Leader All-Area performer on the basketball court for BHS.She’s also an important piece for the Lady Panther relay teams. The meet wasn’t without some controversy and frustration for BHS when it came to those relays.

BHS initially won the first running of the girls’ 4×100-meter relay. That victory was nulled though as Hattiesburg had a runner go down and appealed the final results because of that. Gautier won the rerun as Brookhaven finished in fourth place.  “It shouldn’t have been rerun, but it was out of our control,” said Dorsey.

Willis, Aniyah Cook, Jayda Johnson and Genesis Frazier make up the 4×100 relay team. The team bounced back to take first in the 4×200-meter relay by edging out Hattiesburg and Gautier.

Willis, Frazier, Aniyah Cook and her cousin Jakira Cook are on the 4×200 relay team. With Willis and Aniyah Cook coming back next year as seniors while Johnson will be a junior and Jakira Cook will be a sophomore, look for BHS to contend again in the sprints and relays at next year’s state meet.

The biggest and certainly most pleasant surprise of the day for Brookhaven High was sophomore Brodie Ezell who finished first in the discus.

At the 5A South State Meet on April 22, Ezell finished a distant second to South Jones senior Reid Gavin.

Gavin is a 6-foot-4, 320-pound offensive lineman for South Jones who’s signed to play football next year at the University of South Alabama. Gavin’s throw that day in April traveled just over 143-feet. Ezell was near 133-feet that day.

At the Region 3-5A meet earlier in April, Gavin was first again with a throw of over 139-feet. Ezell finished third with a 119.07-feet toss.

So, what changed ahead of the state meet?

“My coaches saw something we could improve in my technique,” said Ezell. “Coach Dorsey and Banks have both played a big role in my improvement. I wasn’t keeping my chin over my shoulder at the end of the throw and that would kill my momentum.”

Ezell made the adjustments, and the improvements were quick, and results were impressive.

“After I made that change, I was almost instantly throwing it farther than I have ever thrown,” said Ezell.

At the 5A meet Ezell won first with his best ever competition throw, 144.1-feet. Gavin was second with a 142.4-foot toss.

“Brodie was a diamond in the rough to start the year,” said Dorsey. “His hard work and dedication paid off.”

If you’ve seen a photo of Ezell from the state meet, you’ll notice a smile on his face that won’t get wiped off anytime soon.

You may also notice his hairstyle as mullets are currently back in vogue.

Ezell’s is something to behold as it’s curly and voluminous. At an event like the 5A meet, it gets a large amount of looks and even compliments.

“Honestly, it gets a pretty good number of compliments,” said Ezell. “People to tend to smile when they see it and that makes me feel good.”

Ezell and whatever hair style he’ll wear next season will be back to defend his discus title. The number of returnees for Ole Brook has Dorsey pumped about the future.

“I’m very excited about next year’s teams because we have a lot of talent coming back,” said Dorsey.