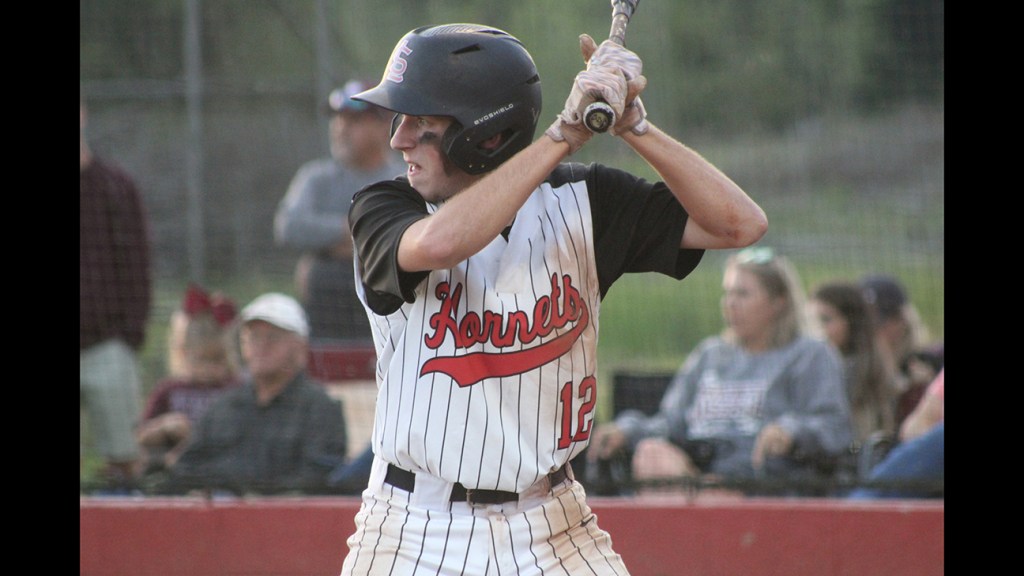 Photo by Cliff Furr / Loyd Star senior Harrison Hux and the Hornets meet Puckett in the third and final game of their MHSAA 2A playoff series tonight at 6 p.m. on Smith Field. Puckett won game one at Loyd Star Thursday, while the Hornets returned the favor Saturday at Puckett.

With their backs against the wall, the Loyd Star Hornets (23-8) kept their season alive Saturday with a huge 17-7 win over Puckett (19-9-1) in Rankin County.

The win ties the MHSAA 2A series between the schools at one game apiece. Loyd Star hosts the deciding third game tonight on Smith Field at 6 p.m.

The winner advances to the 2A South State Series against Taylorsville later this week.

After the first-round loss at home on Thursday, Britt said his team would put their trust in the right arm of senior pitcher Wyatt Hodges.

A Co-Lin signee, Hodges gave his team six solid innings. He struck out six, walked six, gave up nine hits and seven total runs — only two of which were earned.

Garrett Carwyle came on in relief and got the final two outs of the game for the Hornets.

Going the distance was huge for Hodges and the Hornets as it allowed Loyd Star to not use junior pitcher Riley Easterling. He’ll get the start on the hill in game three today.

The Hornets have had a deep starting pitching staff all year spearheaded by junior left hander Dawson Hester, Hodges and Easterling.

Coming into the series, Loyd Star knew they’d be facing a pair of strong arms in Puckett’s Mattthew Bozsor and Waylon Sebren.

Boszor got the game one win and quieted the Loyd Star bats for most of that night.

Saturday Sebren only lasted 3.2 innings. He struck out 10, but also walked nine. Sebren gave up four hits, and six earned runs on 113 pitches. Three relievers came on in his place, all throwing somewhere around the 40-pitch mark, so they’ll be available to throw again Monday.

Sebren, a Meridian C.C. baseball signee, struggled with his control in his last mound appearance against Bogue Chitto, striking out 11 and walking 10 when the teams met in the last round.

Loyd Star can most likely expect to see senior Price Tullos take the ball for Puckett at some time tonight. Tullos threw 51 pitches in the opener on Thursday in relief of Bozsor.

Tullos struck out three and walked three while giving up two hits in 1.2 innings.

Thursday Tullo’s biggest impact on the game was at the plate as he drove in five runs and slugged two home runs.

The Hornets got plate production from up and down their lineup in the Saturday win. Casen DeHart, Blake Thornton and Hodges had two RBIs each for LS. DeHart, Easterling and Carter Holcomb each slapped a double apiece.

Holcomb, Hester, Easterling, Connor Cunningham and Caleb Smith all had one run batted in apiece for Loyd Star in the Saturday win.

Taylorsville (24-8) is in the state semifinals after sweeping Mize last week. East Union (26-5) and Pisgah (22-13) will meet in the other state semifinal series.