Loyd Star and Puckett postponed after 3 complete, to resume tonight 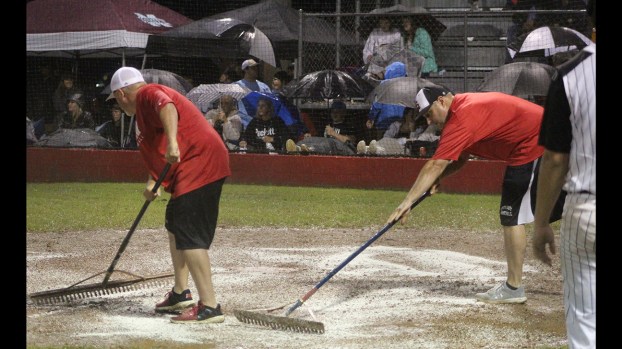 Photo by Cliff Furr / Loyd Star used quick dry around the plate and on the mound throughout the game Monday as they hoped to get the final game of the series finished despite the weather. 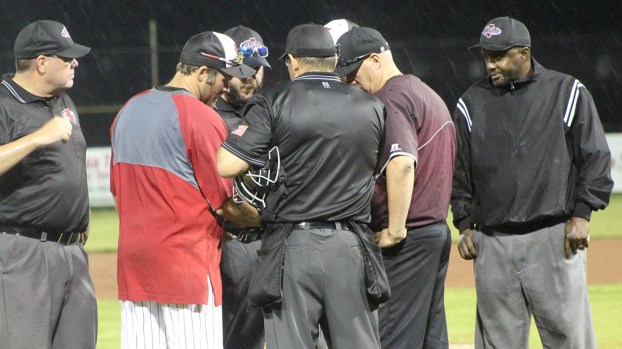 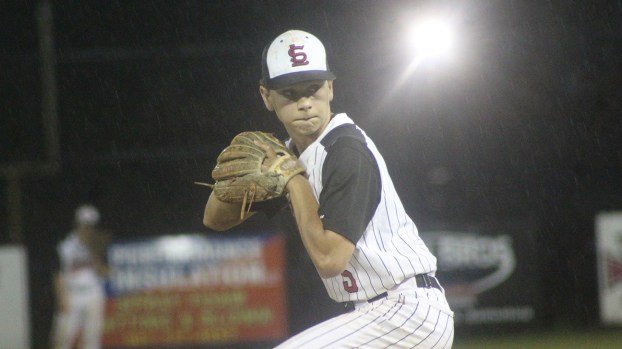 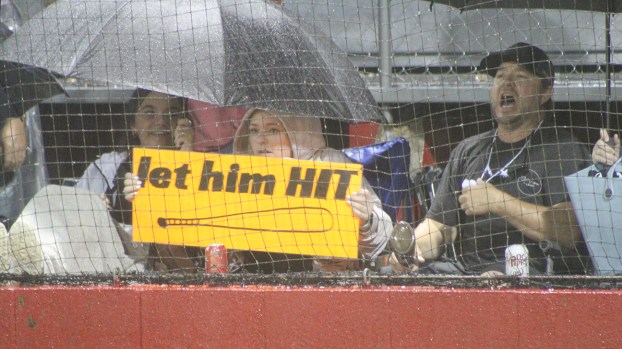 Photo by Cliff Furr / Puckett fans hold up signs begging Loyd Star to pitch to their best batter, senior Price Tullos. Tullos hit two home runs in the series opener and has been walked in every at-bat since, including an intentional walk Monday with the bases loaded. 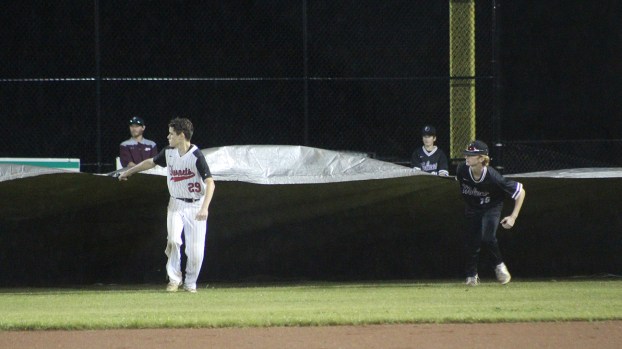 Photo by Cliff Furr / Players and coaches from both teams worked together to stretch a tarp over the Loyd Star infield after the game was postponed as it headed into the fourth inning. 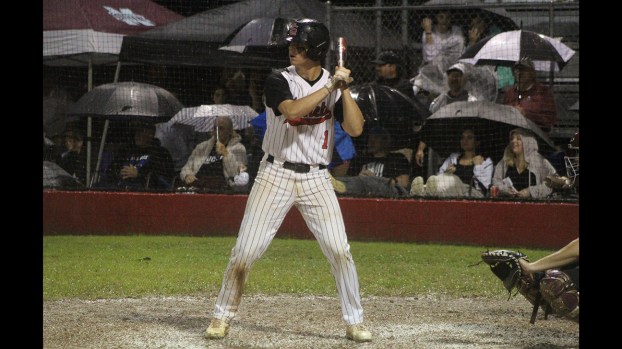 The third and deciding game of the Loyd Star versus Puckett MHSAA 2A quarterfinal playoff series will resume tonight at 6 p.m. — weather permitting — after a hard rain forced the game to be stopped Monday night.

The action will pick back up with Puckett batting in the top of the fourth inning and Loyd Star leading 11-9.

The start of the game Monday was pushed back to 7 p.m. in order to get the field prepared for play after steady rain earlier in the day.

Once first pitch arrived, the game was played in a strong, steady downpour.

Loyd Star specifically wanted to get the game and series finished for a couple of different reasons. One being that much of the remainder of the week has further rain in the forecast with Tuesday and Wednesday both showing high chances of precipitation.

There was also a competitive advantage for Loyd Star as they had more pitching depth available Monday. Game one starter Dawson Hester could come in as relief, but the Puckett starter from game one, sophomore Matthew Boszor, was still on the shelf due to the number of pitches he threw last Thursday.

That changes with the game being postponed until Tuesday as Boszor will likely get the start when play resumes.

And there’s the issue of the 2A South State series that awaits the winner. Taylorsville will be the opponent and is well rested after dispatching of Mize with wins Friday and Saturday. There is some wiggle room built into the schedule though, as the first game of the 2A state championship series won’t be played until June 2 at Trustmark Park in Pearl.

The rain was no harder when the umpires met with coaches and called for a tarp to cover the field around 8:40 p.m. than it had been just under two hours earlier when play began, but there was a chance it would pick up with a stronger cell moving towards the area.

After leaving the field tarped for close to an hour and with no decrease in the rate of rainfall, the call was made to stop for the night.

The Loyd Star staff and head coach Jared Britt worked between innings in the batter’s box and on the mound spreading drying agents to soak up excess moisture in the dirt.

Keeping dry balls in the hands of each pitcher and making sure they had dry dirt to plant and land on at the mound did become an issue as the game began to drag on.

Twenty combined runs had been scored at the time of the postponement, yet there had been just seven combined hits between the teams.

Junior Riley Easterling went the full three for Loyd Star and only four of his runs surrendered were earned. He struck out four and walked nine on 84 pitches. Battling to grip the slick ball, he hit three batters and had four wild pitches.

It was much of the same for the Puckett pitching staff. Grant Allen got the start and lasted just over an inning as he gave up seven earned runs on 46 pitches. Allen walked six and hit one batter. He was replaced by senior Price Tullos who threw 63 pitches and walked three while striking out three and hitting two more batters.

Freshman Nathan Mills drove in four runs through three innings for LS at the plate. Easterling had two RBI while Hester, Wyatt Hodges, Caleb Smith and Harrison Hux had an RBI apiece.

Tullos — who homered twice in the series opener last week — was again intentionally walked every time he came to the plate, including once with the bases loaded.

Puckett coach Kelly Boszart moved Tullos to the top of the batting order and that paid off as the second batter of the game for the Wolves, Wyatt Sebren, crushed a two-run home run that put his team up 2-0.

Puckett led 3-2 after one complete and trailed 8-4 after two complete.

The Wolves bounced back to take a 9-8 lead heading into the bottom of the third.

Hux and Hodges both drew walks to begin the LS half of the third and then scored on a one-out double by Easterling. Easterling would later score on a sac bunt by Mills that made the score 11-9.

If the game can’t resume Tuesday or Wednesday due to rain, it won’t be played Thursday as Loyd Star is holding graduation ceremonies that night.

A delay until Friday would allow Loyd Star to throw Hodges for a second time in the series. He pitched the 17-7 win for the Hornets Saturday at Puckett.