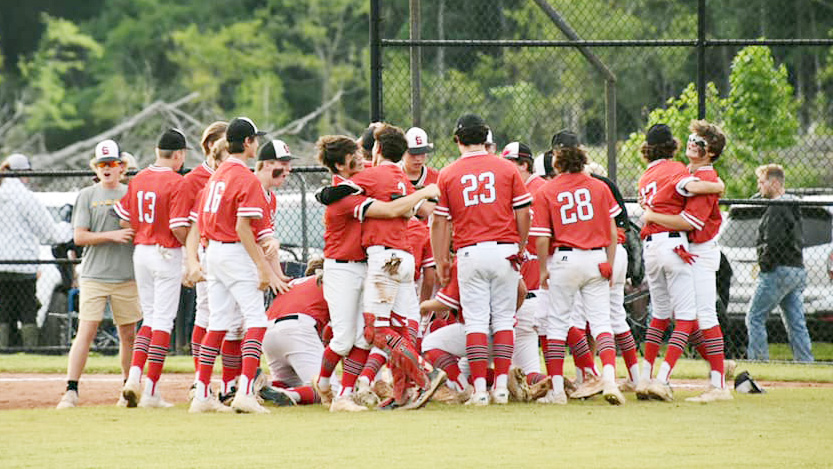 Photo submitted Loyd Star players celebrate on the field after beating Puckett in the finale of their quarterfinal 2A playoff series on Tuesday. Down one run and with just one strike left in the game, the Hornets sprung an unforgettable comeback.

Standing beside the Loyd Star dugout Monday night, soaked to the bone, with a camera tucked inside my jacket to keep it dry, I couldn’t help but laugh at how absurd the scene was.

The Hornets were facing Puckett in the third game of their MHSAA 2A quarterfinals playoff series. The winner of the game would be one of the four remaining teams left in the state.

Monday it felt like Loyd Star had an advantage coming into the game as they had more quality pitching depth available. Moving the game to the next day would allow Puckett to use their best arm, sophomore Matthew Boszor.

Boszor had mostly kept the LS bats at bay in the series opener on the previous Thursday. The Hornets wanted to end things on Monday and eliminate the chance of seeing Boszor again.

Nature had other ideas though. As you know, April showers have given way to more May showers this year.

Just as the game started, a soaking rain parked over northwest Lincoln County and made itself comfortable.

It was the second shower of the day as wet weather had moved through earlier in the day, but the Loyd Star staff and supporters were able to get the field into game-shape during a break in the weather.

Now the rain was back, and it was here to stay. The concrete sidewalks around Smith Field resembled a tributary of Bayou Pierre.

The area around home plate looked primed for mud riding, no matter how many bags of quick dry were spread there between innings.

As the excess water ran off my jacket and somehow down into the back pocket of my jeans at one point, all one could really do was laugh.

I kept smiling through the nearly two hours that it took to play three complete innings. The intensity of the game was what you would expect in an elimination setting from two evenly matched, well-coached teams.

My biggest grin of the night might have come when Loyd Star coach Jared Britt called to intentionally walk Price Tullos of Puckett with the bases loaded in the top of the third inning.

It was the eighth intentional walk issued to Tullos after he homered twice and drove in five runs in game one of the series.

You ever seen that sign going into the town of Puckett? The one that says, “Welcome to Puckett  — 300 good friendly folks and a few old sore heads.”

Monday the Puckett fans were a sea of sore heads as they desperately wanted Loyd Star to throw one across the plate to Tullos. They held up signs that read “Let Him Hit” and loudly chanted the phrase in unison.

Britt wasn’t doing it though, despite the Puckett fan who jumped out of his chair and danced like a chicken behind home plate. A grown man prancing around while flapping his arms — you’d have laughed too.

Loyd Star is a young team. There are only three seniors on the roster with two being starters in outfielder Harrison Hux and pitcher/infielder Wyatt Hodges. When those two talk, their younger teammates listen.

Youth isn’t always a bad thing in high school sports though, it can even be an advantage with the right group of kids.

Sometimes a younger player will be a little more fearless and a little less intimidated in a big game. That’s not always the case, but underclassmen can often give their team a jolt when it’s badly needed.

Freshman Nathan Mills stepped to the plate Monday in the bottom of the first in a high-pressure spot. Mills was on the field at shortstop as the regular starter at the position, junior Riley Easterling, was pitching that night.

On a 2-1 count, Mills confidently stroked a two-run RBI single that cut the Puckett lead to 3-2 and gave his team a huge spark.

It was just his second hit of the season and came in the biggest game of the year.

As it has previously been documented here, the game was bumped back to a Tuesday finish by the unstopping rain as things picked up that day in the top of the fourth inning.

Puckett quickly regained the lead via a 3-run home run Tuesday and now had Boszor back on the mound throwing strikes.

The young Hornets didn’t panic though. They kept plugging, kept fighting. Even when the season appeared to be over.

With two outs and two strikes in what could have been the final Hornet at-bat, junior Dawson Hester hit what appeared to be a routine groundball towards the second baseman.

The Puckett dugout was crouched and poised to charge onto the field in celebration. All that separated them from doing so was a simple flip to first base for the out.

It never happened. The second baseman tripped and couldn’t get rid of the ball. Casen DeHart scored the game tying run on the play and things then began to come apart for the Wolves.

One of the deans of coaching baseball in our area said this recently about the game and it came to mind as Loyd Star staged their rally.

“Baseball is unlike any other sport as far as comebacks go. You can’t kneel on the ball and run the clock out. You can’t go to a four-corners offense and pass the ball around and play keep-away from the other team. You’ve got to throw the ball across the plate and make the plays to end the game.”

It was a sophomore that ended the game for Loyd Star, second baseman Blake Thornton hit a soft shot to shallow center that scored Hester from third. A Riley Easterling single and a huge dropped third strike by Puckett that resulted in freshman Colby Terrell getting to first preceded Thornton’s hit.

It was a true team win. And the type that reflects the kind of program that coach Jared Britt has built at the school. Loyd Star made the state quarterfinals in 2019, won a 2A state title in 2017, lost in the state title series in 2016 and made the south state championship series in 2015.

“Even though we’re young, a lot of our guys have been with us a long time and were around some of those good teams that came before them,” said Britt. “I think that helps. I think that’s why they weren’t intimidated when the moment became so big. That was an advantage we had over Puckett.”

It truly is a family affair at a community school like Loyd Star. This year’s team has six players who had older brothers on that 2017 title team.

What it takes to win has been passed down from team to team as the Hornets have become a perennial 2A contender.

And that’s what they’ll meet in the 2A South State Series this weekend, another perennial 2A contender in Taylorsville.

Since taking over an already winning program from Jonathan Breakfield in 2012, Britt and his team have become accustomed to seeing Taylorsville in the postseason.

“They’ll be a typical Taylorsville team,” said Britt. “Good hitting, great pitching and athleticism all over the field. Very well coached. It’s going to be a tough series, but we’ll be ready.”

Taylorsville is good, no doubt about it — but you’d be silly to count these Hornets out.