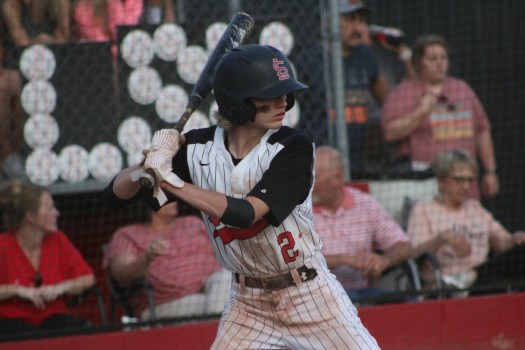 Sophomore Blake Thornton got aboard via single to start the bottom of the fourth and then scored one of the Hornet's three runs in the win. 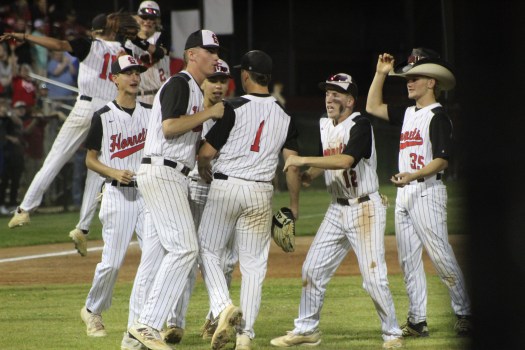 The Hornet dugout comes out to congratulate Hodges after he gets his final strikeout to end the game. 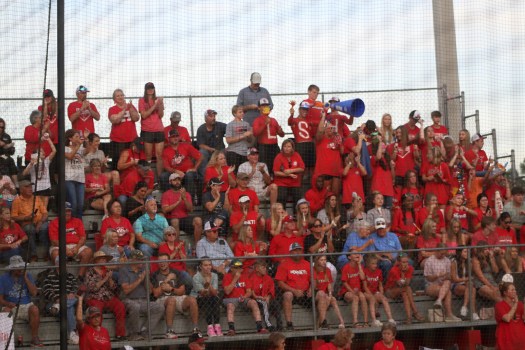 A large student section filled most of the home bleachers at Smith Field as fans found open spaces to watch the game all along the outfield fences. 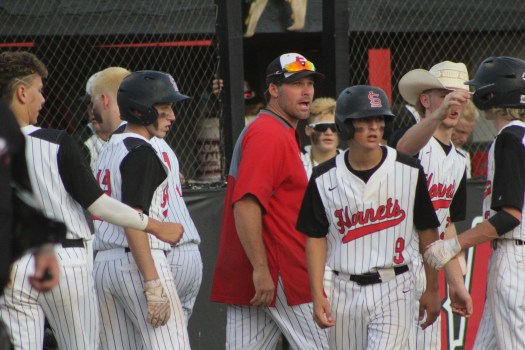 Loyd Star coach Jared Britt has his team in the 2A South State Title Series for the fourth time in his 10 seasons as head coach of his alma mater. 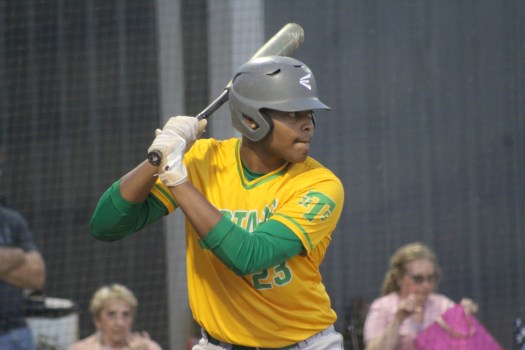 Junior pitcher and first baseman Aiden Moffett will most likely start on the mound for the Tartars in game two tonight. Moffett is an LSU verbal commit. 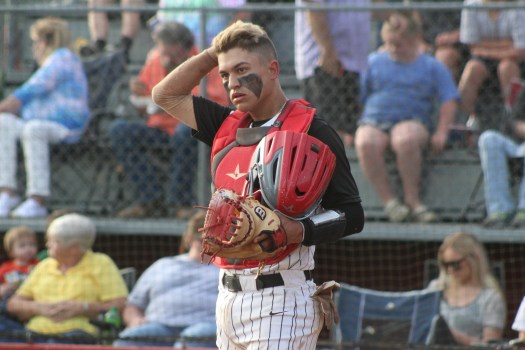 Sophomore catcher Casen DeHart is one of many Hornets that are sporting new haircuts for this playoff series. 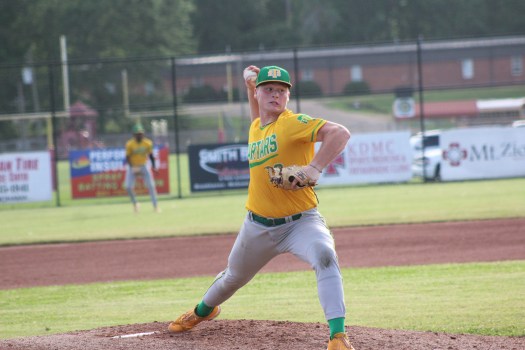 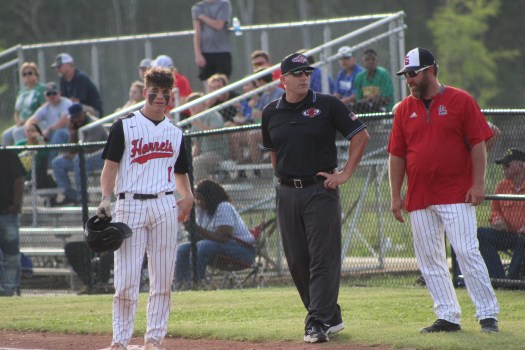 Wyatt Hodges and LS assistant coach Seth Britt wait out a mound visit by Taylorsville with an umpire Friday night. 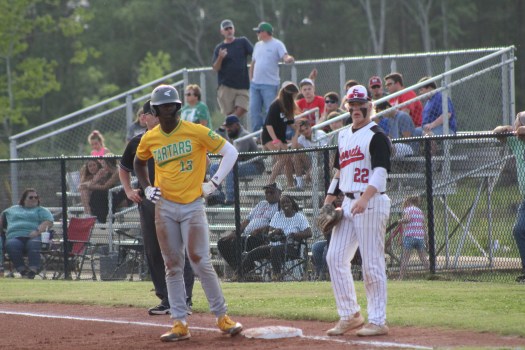 Senior Ty Keyes readies to lead off at first as Loyd Star junior Dawson Hester gets into position. An all-state quarterback, Keyes has signed with Southern Miss. 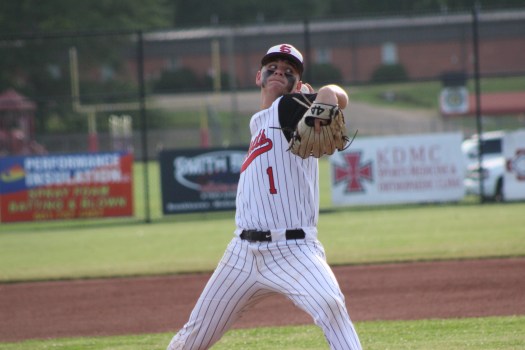 Everything was picture perfect for Loyd Star Friday night in their MHSAA 2A South State Series opener against Taylorsville.

Smith Field was finally dry, and the weather was beautiful. A large crowd filled the bleachers behind home plate and down the line at third as fans in chairs ringed the outfield fence along with tents and canopies in the gravel lot beyond centerfield.

On the biggest stage of the season, Hornet senior pitcher Wyatt Hodges was at his best.

“Wyatt has taken his game to the next level,” said Loyd Star coach Jared Britt. “He had his changeup and his curveball working tonight. When you can throw three pitches for strikes, you’re going to be very effective.”

Effective is a great adjective for the game that Hodges, a Co-Lin baseball signee, pitched.

The Taylorsville (24-9) lineup is much lauded. Junior first baseman Aiden Moffett is an LSU commit while senior Ty Keyes is batting .370 in his first season of playing baseball since he was a freshman. Keyes is decorated quarterback who’s signed with Southern Miss.

The muscle for the Tartars is junior Karson Evans. A broad-chested pitcher, catcher and infielder — Evans is committed to the University of Houston’s baseball program.

He came into the game batting .517 on the season and provided the only run of the game for Taylorsville.

In the top of the third Evans crushed a 0-2 pitch over the right field fence to put THS up 1-0. It was the only bad pitch of the night for Hodges.

“We wanted it about halfway in the left-handed batter’s box and he only put it about a third of the way and Evans did a number on it,” said Britt. “That dude is the real deal.”

Hodges struck out Keyes looking to end the inning after the Evans home run.

The first was a 3-up-3-down inning for Hodges. The top of the second was dangerous as he issued one of his two walks and then hit the next batter. A slow roller to third next juiced the bases at Taylorsville had them full with one away.

With two strikes on Dereco Crosby, Loyd Star pitching coach Seth Britt called out to Hodges that the next pitch was his pick.

Crosby went down swinging and the Tartar threat was done as Loyd Star’s fans erupted in cheers.

After Evan’s home run the Hornets immediately responded in the bottom of the third.

With two down junior shortstop Riley Easterling laced a groundball through the middle of the infield to score Hux.

Loyd Star stayed hot in the next inning as sophomore Blake Thornton led off the frame with a single.

Thornton bats seventh and it was the bottom of the LS order that got things rolling. The ninth batter, freshman Caleb Smith, then singled.

Leadoff batter Casen DeHart was hit by a pitch to fill the bases for Loyd Star. Hux drew a walk to score Thornton and a sacrifice fly by Hodges plated the third and final Loyd Star run of the game.

“The guys at the bottom of our lineup have been doing a great job of getting on base,” said Britt. “That gives the guys at the top some RBI opportunities and that’s been working great for us.”

Evans started on the mound and if the stats posted on MaxPreps are correct, he had not given up an earned run all season and has not had an outing as rough as he did Friday since Taylorsville lost to Sumrall in their season opener on February 20.

There is also a local connection for Karson Evans as his mother Terah Curtis Evans was a standout athlete at Brookhaven Academy.

Evans lasted four innings and walked five while striking out five on 109 pitches. He gave up four hits and two earned runs.

Teddy Page came on in relief and was solid over two innings. The 5-foot-9 Page used a side delivery and gave up no hits on 25 pitches.

High school pitchers are limited to 120 pitches in a game and that doesn’t leave much wiggle room for a bad inning. Getting a complete game from Hodges was huge as Loyd Star wanted to keep both junior southpaw Dawson Hester and junior right-hander Riley Easterling available with their max pitch counts for the rest of the series.

Loyd Star held graduation the night before and Hodges enjoyed a day of rest before his start.

“I slept till lunch, went to get something to eat and then came out here and relaxed to mentally prepare,” said Hodges. “My defense was really good behind me tonight.”

A sentiment that was echoed by his coach.

“Carter Holcomb made a couple of big plays for us in right field,” said Britt. “He had a line drive hit at him that’s one of the hardest plays to make for an outfielder and he made the right adjustment to get the out.”

Holcolmb also had a sliding catch in foul territory that ended with his foot stuck under the fence down the rightfield line. Fans standing on the fence pulled the chain-link back to free Holcomb after he’d already thrown the ball in from his knees to hold a runner on first.

As often happens in the playoffs, the Loyd Star baseball team is sporting an array of outlandish haircuts. Call it team bonding.

Some have dyed their hair bleach blond, Hester in particular looks like a teenage Ric Flair. Others have lines shaved on their temples or look somewhat like a skunk.

Hodges went with a perm, a look that he’s kind of pulling off.

“I don’t hate it,” he said with a laugh as he pulled his hat off to shake it out, “I keep pitching like I did tonight, I may have to leave it.”

Loyd Star travels to Taylorsville for game two tonight at 7:30 p.m. If a third game is needed, it will be played back at Loyd Star on Monday at 6 p.m.

“Can’t say enough about our fans,” said Britt. “I had goosebumps when we walked out, and I’ve still got them now. They showed up in a major way.”