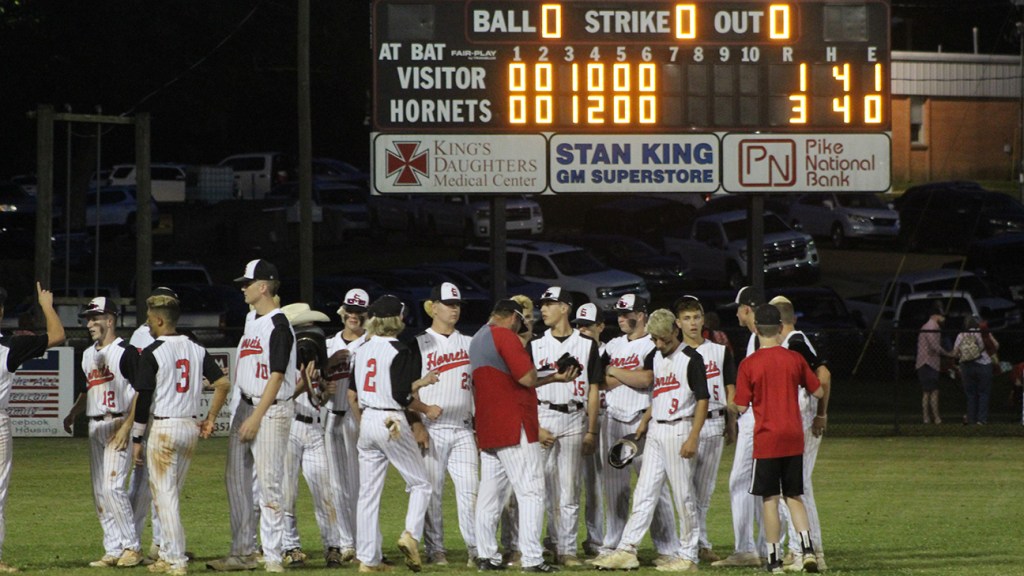 Photo by Cliff Furr / Expect a large crowd tonight at Loyd Star as the Hornets host Taylorsville for their 2A South State Series finale. The winner will move on to play East Union in the 2A Championship Series.

You had a feeling that the Taylorsville (25-9) bats would wake up at some point in their MHSAA 2A South State Series against Loyd Star (25-9).

Especially after LS senior Wyatt Hodges held the Tartars to just four hits in a 3-1 win over Friday.

Saturday, Taylorsville pounded the ball like it owed them money — winning 17-0 at home. The finale of the series will take place at Loyd Star tonight at 6 p.m.

The winner will move on to face East Union (28-5) in the 2A Championship Series at Trustmark Park in Pearl.

Senior Tye Keyes homered and doubled to drive in four runs on the day. Keyes won three 2A state football titles as a quarterback for the powerhouse Taylorsville football team. He’s wrapping up his high school career by playing baseball for the first time since his freshman season.

A Southern Miss football signee, his double in the first put Taylorsville on the board.

Moffett, an LSU commit, pitched a one hitter along with also driving in four RBIs at the plate. Loyd Star senior Harrison Hux was the lone Hornet to get a hit off Moffett.

The Tartars scored four in the first, three in the second, two in the third and then eight in the fourth to blow the game open.

With Moffett and junior Karson Evans unavailable to pitch tonight, Taylorsville will have to go with a game three starter for the first time this postseason.

Senior Teddy Page leads the team in innings thrown this season and is 6-1 on the year with a 1.28 earned runs average. Page uses a side-arm delivery and came in to close out the final two innings for Evans in the series opener.

He struck out one and needed just 25 pitches to get through two innings.

Seventh-grader Noah Westbrook and junior Tyler Booth are two other pitchers with experience that may be used by Taylorsville coach Dusty Hillman.

Loyd Star will need a big night from junior southpaw Dawson Hester on the mound.

This is the fourth 2A South State appearance for Loyd Star coach Jared Britt’s team in his 10 years leading his alma mater.