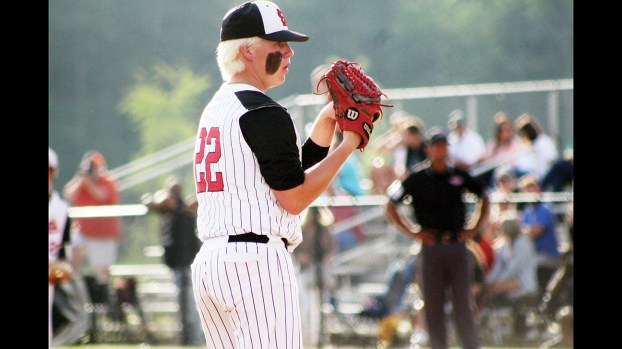 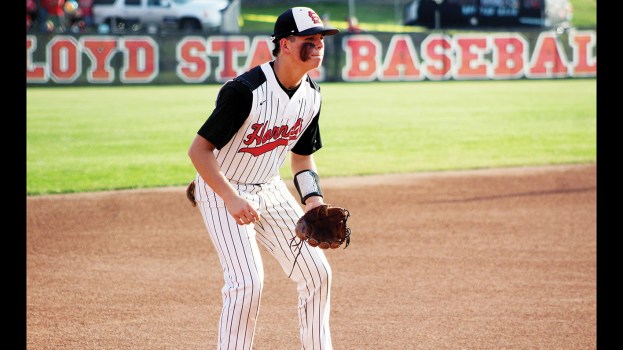 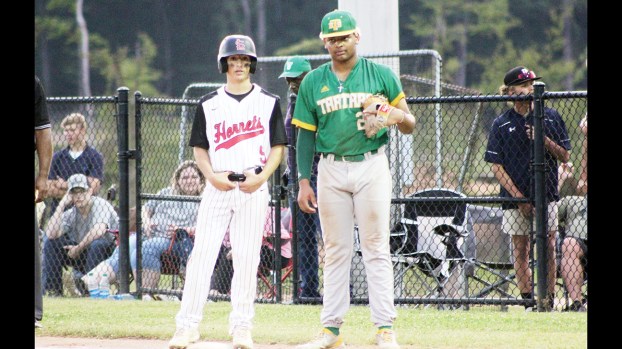 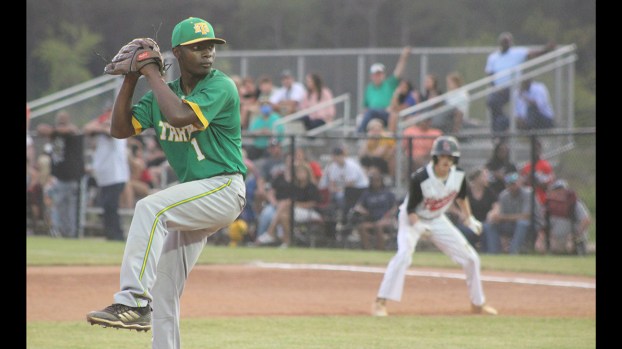 They sat in camping chairs, some that had been placed to hold a spot since church let out the day before. They stood along the fences, three-deep in different areas, looking for a good sight line. They filled the small section of grandstand bleachers behind home plate, one side completely decked out in red, the other wearing shades of green.

The fans that filled every crevices of Smith Field Monday came to see Loyd Star host Taylorsville in the final game of the MHSAA 2A South State Championship Series.

You can say the game on the field definitely lived up to the expectations of the crowd as both teams battled to keep their respective seasons alive.

With the potential winning run at the plate in the bottom of the seventh, Taylorsville seventh grade pitcher Noah Westbrook got a game ending strike out to give the Tartars a 9-7 win.

Taylorsville (26-9) moves on to play East Union (29-5) in the 2A State Championship Series. Game one of that series will take place at 1 p.m. Wednesday, June 2. All MHSAA championship series games will be played at Trustmark Park in Pearl.

Regardless of who wins that title series, Loyd Star (25-10) went down fighting as one of the best teams in their classification. Far exceeding the expectations of their head coach.

“First of the year we started off 1-5, nobody expected us to be here,” said Britt. “We had four freshmen on the field together at times, sometimes five and we played three sophomores regularly. They exceeded my expectations all year long and I never doubted them. I couldn’t be any prouder than I am now.”

There were moments Monday where it looked like the young Hornets might keep exceeding expectations and make it all the way to the last series of the season, but a powerful Taylorsville lineup answered every Loyd Star push of momentum with one of their own.

Even when things were going good for the home team, you could feel that they needed a run or two more here and there if they were going to hold off a coming Taylorsville rally.

Loyd Star scored three in the bottom of the first, but left the bases loaded to end the inning as they had filled the bags with just one away in the frame.

In the bottom of the second Loyd Star went up 4-1 with no one out but would only get that single run as they left runners stranded on first and second.

In the bottom of the fourth they again left runners on first and second after putting them there with just one down.

The lead felt tentative as the Hornets were up 6-5 headed into the top of the seventh.

Loyd Star junior southpaw Dawson Hester reached his 120-pitch limit in the inning. Junior Karson Evans roped one down the third base line to get on as the leadoff batter of the inning for the Tartars.

Britt brought in junior Craig Bass to pitch with two on and no outs and chose to intentionally walk junior Aiden Moffett to load the bases.

The call was hard, but it was the right one as Moffett put Taylorsville on the scoreboard in the top of the second with a solo home run.

That homer was a moon-shot that almost landed on the Loyd Star softball field past the left field fence.

If you want to know why Taylorsville is one of the best small school football programs in the state, look no further than the trio of Keyes, Evans and Moffett.

“You line those three guys up and you aren’t going to have many teams in the state that have more size and power batting in their three, four and five holes,” said Britt. “Especially not in 2A.”

Evans is a rifle armed 6-foot-1, 215-pound catcher who’s committed to the University of Houston for baseball and led Taylorsville in tackles last season in football.

Keyes hasn’t played baseball prior to this season since he was a freshman, a three-time state champion quarterback, he’s signed with Southern Miss for football.

And Moffett plays on both sides of the line in football at 6-foot-3, 225-pounds. He’s committed to LSU as a pitcher.

Junior Tyler Booth came up big after Moffett was intentionally put aboard. Booth smacked a 2-1 pitch that scored Evans and Keyes to put the Tartars up 7-6.

Moffett then scored on a wild pitch and a Dereco Crosby single later in the inning plated Booth for the final Taylorsville run of the night.

Booth started on the mound for THS but didn’t last long as he was chased after one. He gave up four runs, none earned, on 45 pitches. He struck out two and walked three.

Taylorsville coach Dusty Hillman then went to senior Tedrick Page to get his team through most of the remaining game.

Page had been hard to hit for the Hornets as a reliever in the Friday night opener. Monday though Loyd Star made Page work as he gave up six hits and two earned runs over five innings. Page walked two and struck out four on 116 pitches.

Down to their final three outs of the season, Loyd Star got the bottom of the seventh started with a walk by Harrison Hux. Wyatt Hodges also drew a walk and then both moved up on a Hester single.

Hux scored via a Riley Easterling sacrifice fly, but Westbrook retired the next two batters to set off the Taylorsville celebration.

Taylorsville took their first lead in the top of the fifth. With the game tied 4-4 and one out, Evans was intentionally walked.

Keyes delivered the same type of hit that Evans would produce in the seventh, a low screamer down the line at third that stayed fair and rolled to the deepest corner of Smith Field.

Evans scored from first to make it 5-4 and then Loyd Star chose to put Moffett on via a walk. Booth popped out and LS catcher Casen DeHart gunned Keyes down trying to take third to end the inning.

While Taylorsville committed four errors in the game, Loyd Star had a clean night defensively and made several plays that kept Tartar hitters off the bases.

At third base Hodges caught one hard hit ball off the bounce as he went towards the shortstop. He spun out of the snag and fired to first baseman Colby Terrell.

A freshman, Terrell made a leaping catch and reached back to tag the runner in one motion when it looked like the play might be a bust.

Terrell was also run over in the sixth as the speedy Crosby tried to beat a throw down the line. Hodges had fielded the ball at third, looked to check a runner at second and then fired across the infield.

Crosby ran over Terrell as he stretched to make the catch. The first base umpire ruled Crosby safe, but was overruled by the ump at home who said Crosby was outside the running lane before he got to the bag.

Loyd Star had won game one Friday 3-1 behind a gem of a pitching performance from Hodges. Saturday at Taylorsville the Tartars mashed balls all over the park in a 17-0 win.

“After that type of loss we took Saturday, we could have easily come out tonight and folded up shop,” said Britt. “And instead these kids came out and competed their butts off all the way until the end.”

Stylistically, the teams couldn’t have been more different in their offensive approach. Loyd Star bunted runners over, worked the count and tried their best to manufacture runs with pressure.

Comparatively, the Tartars took big hacks every time they were at the dish and relied on their power.

The bottom half of the Hornet batting order has been huge for Loyd Star throughout the postseason and that was still true Monday.

Sophomore Blake Thornton, batting seventh, started the fifth inning off with a single and then moved up to second on a Carter Holcomb groundout.

Britt gave the sign for the next batter, freshman Caleb Smith, to bunt for a hit.

Smith waited until the last instant before putting his bat out and laying down a bunt towards third.

The ball was spinning sideways and might have gone foul, had it not hit a patch of clover on the fair side of the line. Its momentum died, Smith safely made it to first and Thornton slid into third.

Thornton then would score when DeHart hit into a fielder’s choice to tie the game at 5-5.

Thornton singled again in the sixth after Terrell reached via single himself as the previous batter. Loyd Star had the bases full with just one away, but only got a single run in the inning via another RBI single from Smith.

That put the score at 6-5 before Taylorsville took control in the next half inning.

Designated hitter Hux and Hodges are the only two senior starters on the team.

Britt spent a long time talking to his group in left field as Taylorsville had their celebratory dog pile, took pictures and were packing their bags while Loyd Star was still listening to their head coach.

He didn’t stand over them and talk down to the team, instead kneeling to get eye level with the players sitting and crouching in the grass. Britt was animated at times, telling the team how proud he was of their efforts and reminding them of just how far they’d come in 2021.

The season started with Loyd Star losing 24-2 to Northeast Jones on Feb. 23. Monday night after a more than 3-hour slugfest with Taylorsville, that came felt like it was played a lifetime ago.

Once Britt and his coaching staff walked away, the team took a moment to embrace their seniors. Hux and Hodges walked back to the dugout alone as the rest of the team remained huddled in front of the scoreboard.

Hester, Bass and Easterling will be next season’s seniors. With two of their most vocal leaders walking towards the parents and fans along the third base fence, they took control of the final huddle of the season. Talking about next year, talking about being right back in this same place a year from now.

“These seniors know they’ve helped continue the legacy of Loyd Star baseball,” said Britt. “They can hold their heads up high and know they’ve done their jobs and passed the torch to the next group.”

Britt is Loyd Star to the core. An alum of the school, this is the fourth time he’s had his team in the 2A South State Series in his decade as head coach.

This season and postseason run isn’t one he’ll soon forget.

“This is probably the most fun group I have ever been a part of,” said Smith. “They’re great examples to younger kids, they love each other, and they play hard for each other. I told them I’d go to war with them any day, every day and all day — that’s how much I love these boys.”