When the wounds aren’t quite as visible 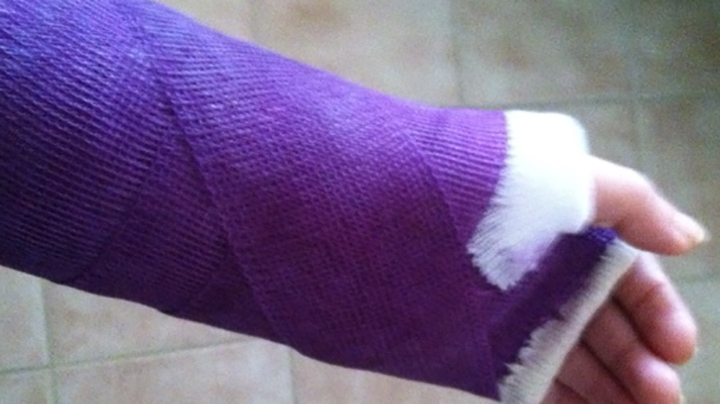 I  drove at a ridiculous speed down the straight highway, emergency flashers going, trying my best to get to my little girl. She was 8 years old and had fallen backward over a tree limb, landing on her left elbow and cracking the bone.

She was in terrible pain and scared. Mom was in a meeting and my older children couldn’t reach her. I was in another town.

As soon as I got home, I picked her up gently and carried her to my truck, placing her on the front seat as she cried. My heart was breaking for her and she just kept apologizing for falling.

Stop apologizing, I told her, and we’ll get you feeling better as soon as possible. Several scans later, her arm was wrapped and she had been given something for the pain. It was confirmed broken after the swelling went down a few days later, and she had her first cast — a purple one.

The rigid purple plaster protecting her left arm announced to everyone she came into contact with that she was wounded and (hopefully) healing. Though plenty of people asked what happened and how bad the break was, no one doubted she had been hurt.

Friends offered to help with her school books or lunch tray as she got used to the cast. She missed softball practice and games because she needed to heal. Her coach missed her at first base, but was more concerned that my daughter heal correctly than attempt to play or practice and possibly make her injury worse.

I have torn both of my knees, front and back, and limp sometimes because of it. They are older injuries, but the pain, swelling and arthritis sometimes come back, just as it may eventually in my daughter’s arm. Incidentally, she broke it again two years later, less than an inch from the original break. This one healed more quickly, though.

But another cast announced to the world that a bone had once again been broken and needed special attention.

When my knees get bad enough, my cane or walking staff make a similar announcement.

A bandage, eye patch, cast, cane, stitches, etc. all announce a wound to the world. Compassionate people may offer words of encouragement and hope, or say prayers for healing and comfort.

Though I could be talking about physical wounds covered by clothing, I’m not. I’m talking about emotional, psychological and spiritual wounds. We all know from experience that these hurt much worse than even a broken arm.

They certainly take longer to heal.

Too many are not, and that’s why so many people do their best to make sure you don’t see their hurt.

It’s not just because they want to be “strong” — it’s more often because asking for help is just as painful or more so.

I refuse to be the reason someone else is afraid to ask for help. I promise to be a compassionate ear and a helping hand.

And I’ll be grateful for you to be the same for me, too.