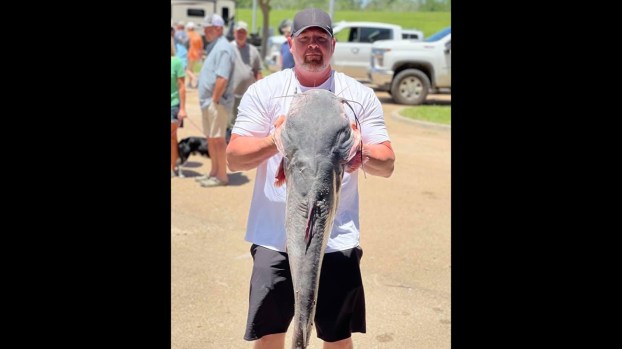 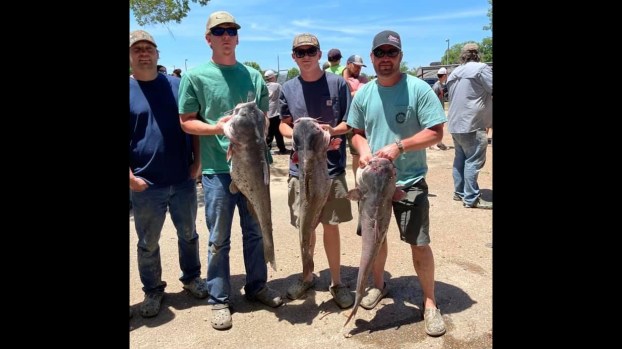 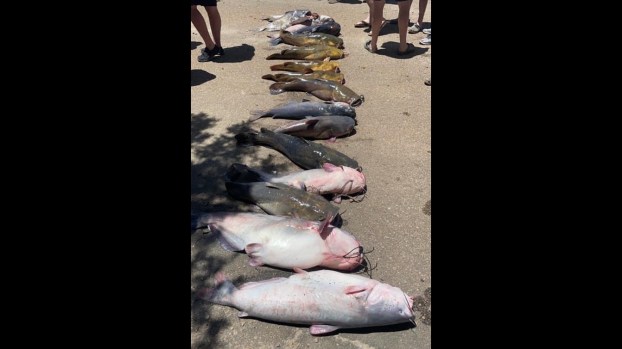 Photo submitted / The yield wasn't as big this year as last, but plenty of big fish were still caught last weekend at the annual Memorial Day trot line fishing tournament.

Eighteen boats were entered in the competition, up from 14 last year.

Fishing begins Friday at daylight and concludes Sunday at noon. The boats put in at Natchez and hold their weigh in under the river bridge on the Vidalia side.

Top prize goes to the boat that lands the biggest single fish. The second-place team is the one that has the highest combined weight of their three largest fish.

The team of John Hutcherson and Toby Criswell took top prize last weekend with their big catch of a 54.24-pound catfish.

Last year’s biggest fish topped 86-pounds at the weigh in.

This year the fishing was a little tougher.

“We had strong wind all weekend and it would rain on and off,” said Prather. “Everyone was fishing hard, but it was tougher to get on the fish and stay on them, they were mostly in shallow, still water. Last year kind of spoiled us because we had so many huge fish get hauled in that weekend.”

While there wasn’t a large pile of catfish weighing over 50-pounds like lats year, Prather said plenty of teams caught fish over the 30-pound mark,

“I probably fished harder this weekend than I did any other year — maybe harder than I have in my life,” said Prather. “We didn’t pull anything that was close to 30-pounds until that last day. Once we got on them, we caught a bunch of good fish — but the work was finding them.”

Each boat has a 250-hook maximum and can fish five miles north of Port Gibson down to five miles south of Deer Park, Louisiana.

The competition has grown from 10 boats the first year to 12 boats in year two.

Teams play $150 to enter with the winners taking 75% of the pot and the second-place team claiming the rest.

Prather would like to keep the tournament field the 18-20-boat range. Too many more and the big river would seem a lot smaller.

“Even with that big area to fish, you’d still see lines hanging off every other branch or tree,” said Prather. “A lot of these guys fish this river enough to know where the sweet spots are, and you don’t want people on top of each other if you can help it.”

Second place was won by the team of Jimmy Francis, Logan Francis and Kasey Durr with a three fish total of 97.66-pounds.

It’s the second straight year for the Francis brothers to win second place.

“It was a great weekend,” said Prather. “I appreciate everyone that fished and all the people that came to the weigh ins. Everybody is having a good time competing together and that’s why we’ll keep it going and run it back next Memorial Day weekend.”