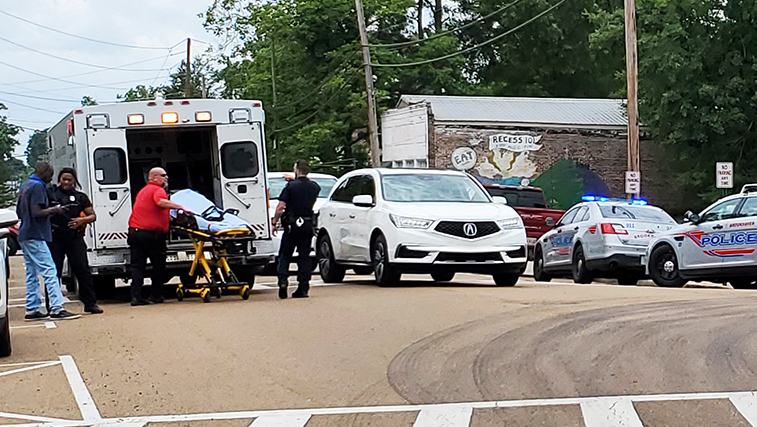 Photo by Brett Campbell A pedestrian was struck by a vehicle in front of the Lincoln County/Brookhaven Government Complex Thursday.

An accident involving a car and a pedestrian in Brookhaven this week has highlighted the need for safety measures to be enhanced at a busy city intersection.

A pedestrian was struck and knocked to the pavement by an oncoming vehicle just after 12 p.m. Thursday in front of the Lincoln County/Brookhaven Government Complex.

The pedestrian was crossing South First Street in a crosswalk when she was struck by a vehicle. The driver of the vehicle got out and assisted her before calling 911, according to witnesses.

Brookhaven police officers took a statement from the driver of the vehicle. EMTs with King’s Daughters Medical Center Ambulance Service checked the pedestrian, who declined to go to the hospital via ambulance, but was transported by family for further evaluation.

A witness said he heard statements from each person that indicated the driver of the vehicle thought he did not need to stop, but the pedestrian would, and that the pedestrian assumed she was safe to cross even with oncoming traffic because she was in a crosswalk.

Mayor Joe Cox said his office has already been in talks in recent weeks with Dungan Engineering on how to improve visibility and safety at the intersection of East Chickasaw Street and South First Street, where the accident took place.

Cox said he had preliminary sketches from the firm on his desk.

“There is definitely limited vision at that intersection,” Cox said. “I think there needs to be a traffic light there — a very expensive solution. Something needs to be done.”

Cox said he was glad to know the pedestrian was not seriously injured and that he believed the engineers were going to present a reasonable plan to address the issue.

The National Highway Safety Transportation Administration cautions drivers to be on the look-out for pedestrians everywhere, at all times. Drivers should slow down and be prepared to stop when turning or otherwise entering a crosswalk. Yield to pedestrians in crosswalks and stop far enough away to give other vehicles an opportunity to see crossing pedestrians, too. Never pass a vehicle stopped at a crosswalk.

Likewise, pedestrians should be cautious before stepping into a crosswalk, continuing to watch for traffic while crossing. Be alert for drivers who may not at first notice someone crossing the street. Pedestrians should also never assume drivers see them — they could be distracted or impaired.

Thirty-one pedestrians were killed in accidents in Mississippi January-June 2019, according to data from the State Highway Safety Offices. That number was 38 for the first half of 2020, an increase of 23%.

Approximately 75% of all pedestrian traffic fatalities for 2019 across the U.S. occurred after dark. Twenty-five percent occurred at intersections and 84% were on streets that were not highways or interstate highways.

Social media comments highlighted a desire for signs or lights to be placed on South First Street where Thursday’s accident occurred, as well as the need for extra caution from drivers to be alert and reduce speed in the area.