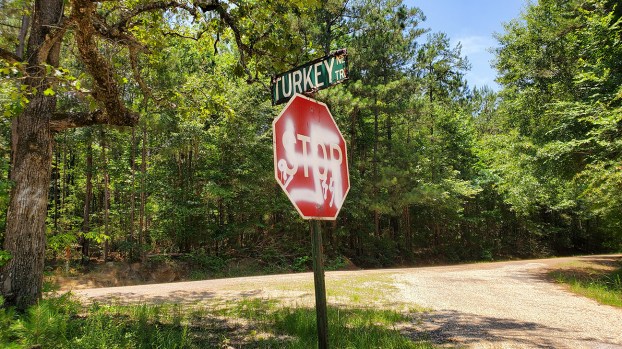 Photo by Brett Campbell / Nazi symbols were painted on the front and back of this stop sign on Turkey Trail recently. 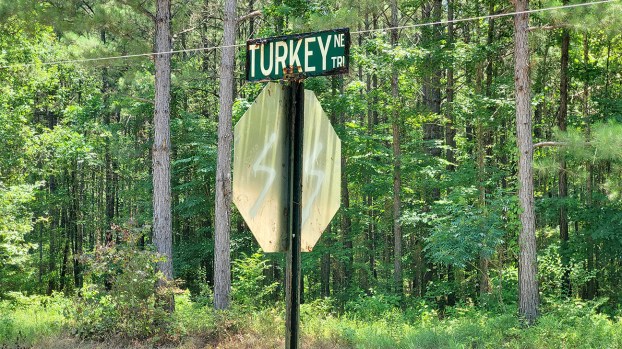 Photo by Brett Campbell / Nazi symbols were painted on the front and back of this stop sign on Turkey Trail recently.

Racist symbols sprayed in white paint across the front of a stop sign in Lincoln County are cause for concern for at least one nearby resident.

“It’s terrible,” said the woman, who did not identify herself. “This kind of thing has got to stop.”

The unknown vandal or vandals used white spray paint on a stop sign at the intersection of Turkey Trail NE and Mission Hill Road to paint a swastika, Nazi SS bolts and the number “9” on the front of the sign and SS bolts on the rear.

Lincoln County Sheriff’s Office Chief Deputy Johnny Hall Jr. said he is not personally aware of any neo-Nazi activity in the county.

The swastika is an ancient symbol used in many cultures, but was adopted by Adolf Hitler and has since become a symbol of hatred.

The SS bolts are a common white supremacist symbol derived from the Nazi-era symbol for the Schutzstaffel, literally “protective echelon,” whose members ranged from Gestapo agents to Waffen SS soldiers and concentration camp guards.

While unclear from the vandalism, the number nine written with the percentage symbol as 9% is sometimes used as a white supremacist symbol referring to the percentage of the world population that is purportedly white, according to the Anti-Defamation League.

Defacing a public traffic control sign is a crime. Mississippi Code 65-7-23 (2019) states that any person who willfully defaces a traffic control sign will be guilty of a misdemeanor and — upon conviction — be liable for the actual cost of repair or replacement of the sign, and either fined $200-$500 or imprisoned in the county jail for six months or less, or both jailed and fined. If the offender is a minor, the parents or guardians will be held civilly liable for actual cost or repair or replacement of the sign.

While unlikely in connection with a misdemeanor, the United States Department of Justice defines federal felony hate crimes broadly, but specifies that a crime committed on the basis of race, color, religion, sexual orientation, gender, gender identity and disability is based on hate. Under the First Amendment, a person cannot be prosecuted for his or her beliefs, but also cannot be protected for committing a crime rooted in beliefs defined as hateful.

The Southern Poverty Law Center has identified two white nationalist groups, one neo-Confederate group and one neo-Nazi group within the state, but none are headquartered in or near Lincoln County.

The unidentified woman who commented on the sign said she hoped whoever did it was caught by law enforcement.

“People shouldn’t be doing that kind of thing,” she said. “It’s pure hatred.”