Bulldogs will throw MacLeod tonight against Vandy in CWS Finals 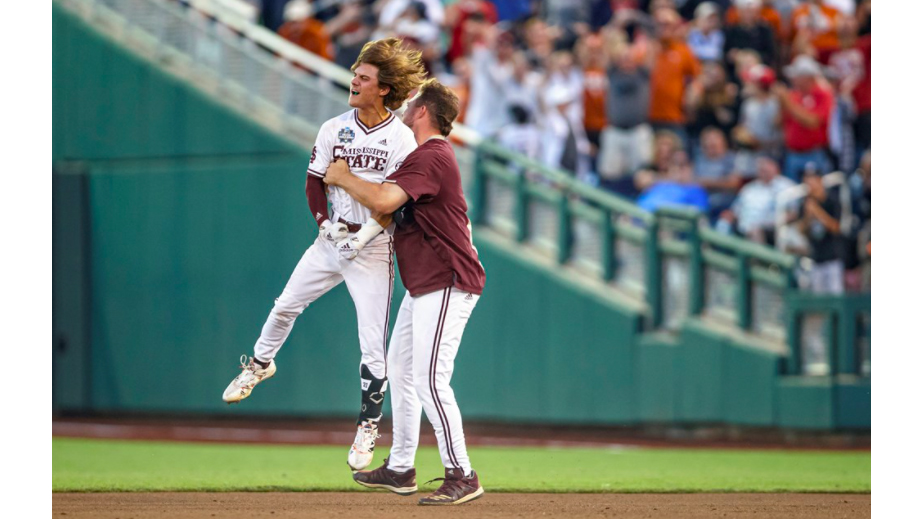 Photo by MSU Athletics / Tanner Leggett leaps in celebration after getting the game-winning hit Saturday for Mississippi State in their 4-3 win over the University of Texas. MSU next faces Vanderbilt in a three-game championship series at the College World Series.

Left hander Christian MacLeod will get the start on the hill tonight for Mississippi State (48-17) in their 6 p.m. CT matchup with Vanderbilt (48-16).
The game is the fourth meeting of the season between the schools and serves as game one of the College World Series finals in Omaha.

The best-of-three series will continue Tuesday and if a third game is needed, it will be played Wednesday at TD Ameritrade Stadium.

Vanderbilt will counter with their All-American pitcher, Jack Leiter.

Leiter has struck out 171 on the season and is soon to be a top pick in the upcoming MLB draft.

State faced Leiter in April when the two schools met in Nashville. Vandy won two of three in that series but took their matchup with Leiter by a 7-4 score.

Vanderbilt reached the championship series after North Carolina State was put out of the tournament by COVID-19 ahead of the second game in their semifinal matchup.

State’s road to the championship series was a harder one as they topped Texas in unforgettable fashion Saturday night.

Tanner Leggett etched his name in MSU lore forever with a walk-off single that scored Brayland Skinner from second and put the Bulldogs back into the title series after the school previously reached those heights in 2013.

With ace Will Bednar pitching the clinching win over Texas, MSU head coach Chris Lemonis will need a big outing from MacLeod in the series opener.

ESPN2 will broadcast tonight’s game while the Tuesday matchup will be shown on ESPN.