Martial arts classes are all about discipline — and fun 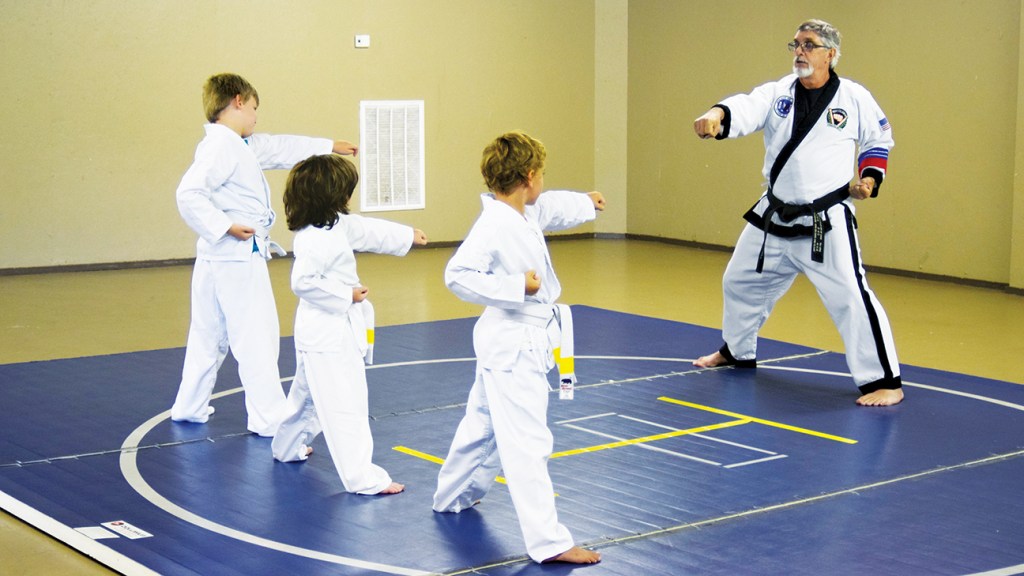 Photo by Emmaline Wolfe Seventh-degree black belt Ken Rogers teaches martial arts classes at the Bicentennial Building on Tuesdays for the Brookhaven Parks and Recreation Department. Above, members of the under-10 class warm up with Rogers.

These are the lessons he works to instill in students of the Brookhaven Parks and Recreation Department’s martial arts classes. The classes meet every Tuesday at 4 p.m. for the “little ones,” followed by a class for ages 10-plus at 5 p.m.

Rogers says he is open to teaching adults, as well — and has adult participants in his Natchez and St. Joseph, Louisiana, classes — but has not had any Brookhaven applicants as yet.

Classes are $60 per month for any age group, and includes cost of uniform. Registration is always open, Rogers said, and classes meet at the Bicentennial Building, 202 Main St.

Though qualified in Taekwondo, Judo and Hapkido, Rogers said he is only teaching the first two disciplines in these classes, though he may make an exception for older students to teach a self-defense move.

“Hapkido is dangerous unless you have really good discipline and are very careful,” he said.

“Taekwondo and Judo are good sports that also have self-defense application,” Rogers said. “Judo is wrestling. Taekwondo is pretty much like karate and kickboxing. Kids love that. We start out with the basics and do sparring with a partner. We don’t want anybody getting hurt.”

Students learn the basics, patterns of movement and free sparring, when they react, defend and attack.

Rogers made first-degree black belt in 1980 as a student at Mississippi State University, and began helping to teach in physical education classes. When he graduated MSU, he qualified as a second-degree black belt. In 2013, he reached his seventh degree qualification. Degrees take a long time to obtain and reflect the amount of discipline and training you have dedicated to the craft, Rogers said.

Having continued to teach since he returned home to Natchez in 1983, Rogers enjoys passing on skills to new students.

“Everything I do is self-defense, fitness and recreation oriented,” the instructor said. “Judo is very popular, and police love it because it’s focused on a stand-up method of defense.”

“You deal with a person standing up. Any time you have an altercation with someone, it begins standing up,” Rogers said. “Especially in multiple opponent situations, you don’t want to get tied up in an on-the-ground situation. You always want to try to stay on your feet. Judo focuses on unbalancing a person from standing, so that they go down, and you can either choose to engage them on the ground or escape — which is what you want to do from a self-defense standpoint.”

Bullying and intimidation are issues that always come up as he teaches, Rogers said. Students talk about it happening at their schools or neighborhoods. Children need to learn to focus the energy that would otherwise become bullying or a wrong response to it, he said.

“It’s all about respect and developing your behavior,” Rogers said. “That’s what we’re focusing on in class. Martial arts is a lot more than fighting. A big part of it is developing your attitude, behaviors and self-discipline.”

Rogers said his classes are very self-disciplined, but not at the expense of fun.

“There’s a lot of playtime involved,” he said, “but it’s all controlled and disciplined. If the kids don’t have any fun, they’ll quit. You need to balance your discipline, fun and skills development.”

Discipline is one of the top concerns parents have when they bring their child to start classes, said Rogers. Asking him to make their children more disciplined is “a pretty tall order” for the limited time he has with them, but with parents teaching them respect and good values at home, he can reinforce those attitudes and behaviors in class.

“When that happens, we have a really good outcome,” he said.

He’s serious about safety — he’s had no major injuries and “practically zero” injuries of any kind since he began teaching — and serious about behavior and discipline.

“You have to teach kids how to behave. If they misbehave in my class, they do pushups, etc. They learn quick,” he said.