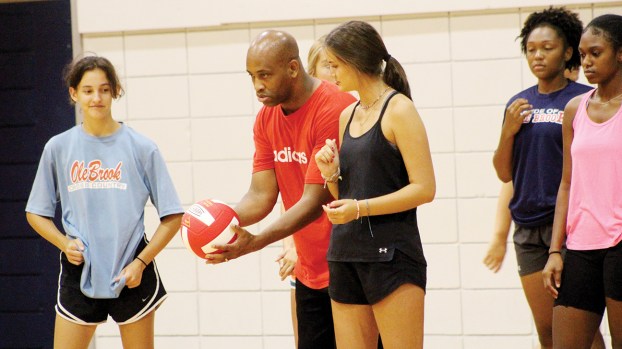 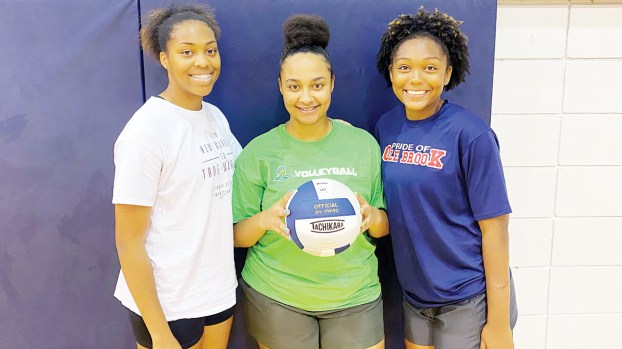 Photo by Cliff Furr / The senior trio (from left) of De'Naejah Williams, Jaide Prather and Kortne Nelson will make their home volleyball debut on Aug. 16 when Brookhaven High hosts McComb. 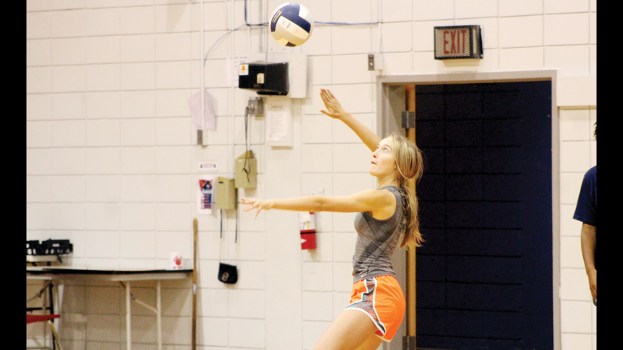 There is a new sound coming out of Sinclair Gymnasium as the pat-pat-pat of a basketball on the hardwood has been replaced by the thump that comes when a volleyball has been slapped.

Brookhaven High is fielding a girls’ volleyball team for the first time in school history. Official practice began Monday as the team prepares of their debut match on Aug. 10 at Franklin County.

The home opener for Brookhaven High will be Aug. 16 when the team hosts McComb in Sinclair. The varsity match will begin at 6:15 p.m. and will be preceded by a junior varsity match at 5 p.m.

Charlton Grey has been tasked with leading the new team in addition to his duties as the new head boys’ basketball coach at BHS.

Grey comes to Brookhaven after serving as head girls’ basketball coach at McComb High and during his time as a Tiger he also led the MHS volleyball team.

“I’ve got a really great group of girls to work with and they’re having fun while also learning the game,” said Gray. “That’s our number one priority this year. We want to keep a positive attitude while learning the game. My first year at McComb we went 4-14 and the next year we went 17-4. It’s new to all of them, but they’re giving great effort.”

Gray had over 100 players try out for the team and has a varsity roster of 25 and a JV roster of 12.

Senior De’Naejah “Tootie” Williams is a natural for volleyball as she stands 6-foot and plays forward for the BHS Lady Panther basketball team.

“Coach Gray brings a lot of energy and he’s letting us know that we’re going to get better if we keep working,” said Williams.

Williams will be joined on the front line of the volleyball defense by fellow hooper Leah Wilcher, a 6-foot-2 junior.

Fellow senior Kortne Nelson is also a multi-sport athlete for BHS. In the winter you can find Nelson on the soccer field and in the spring she’s part of the track and field program. Volleyball fit perfectly into her busy schedule.

“My mom told me to come and try out and I’ve ended up really loving it,” said Nelson. “It’s a really fun sport and our team has great chemistry for a group that hasn’t been together for very long.”

The team is filled with younger players and Gray lauds the leadership abilities of his seniors as they step up to go first in practice drills.

“With us never having a program before, I knew I wanted to give it a shot,” said Prather. “I feel like this is going to make my senior year even more memorable. It feels good to know that we’ll leave behind a legacy as the first senior class for volleyball.”

Volleyball continues to grow in this part of the state as the MHSAA discontinued slow-pitch softball in 2019 which led to schools looking for a sport to fill that hole in their athletic department.

The game of volleyball is hugely popular in south Louisiana with three of the five LHSAA state champions last year hailing from New Orleans and one from Covington.

In Mississippi the sport has seen its most growth south of Memphis in Desoto County, on the Gulf Coast and in the Jackson-Metro area.

Two of the MHSAA state champs last year came from Desoto County (6A Desoto Central, 5A Lake Cormorant) while two more came from the coast (4A Vancleave, 1A Resurrection Catholic).

The best private school program in the state from the MAIS is Jackson Academy while St. Andrew’s Episcopal of Ridgeland was also an MHSAA state champ last year in the MHSAA 3A ranks.

The big three of Mississippi State, Ole Miss and Southern Miss have long fielded volleyball teams. There are just three players on their combined rosters that hail from Mississippi.

Gray took 16 players to a camp hosted by Belhaven earlier in the summer.

“It was our first time to get a taste of what competition is going to be like when the season starts,” said Prather. “It was a really fun experience.”

The game has also grown recently in the community college ranks as Pearl River, Itawamba and Northwest Mississippi Community College all have started programs.

McComb and South Pike are two teams that have been playing volleyball longer than any other high schools in southwest Mississippi. Gray took the Lady Tigers to the playoffs five times during his tenure at McComb.

This season BHS will compete in a region with Florence, Forest Hill and Vicksburg High.

Lawrence County also added volleyball last year and will be one of the local teams that Brookhaven faces this season along with Wesson, another area team that’s in their first year of competition.

Angie Hardy and Sandra Banks will assist Grey. Alexander Junior High is also fielding a volleyball team for the first time this season and will be coached by Hardy.