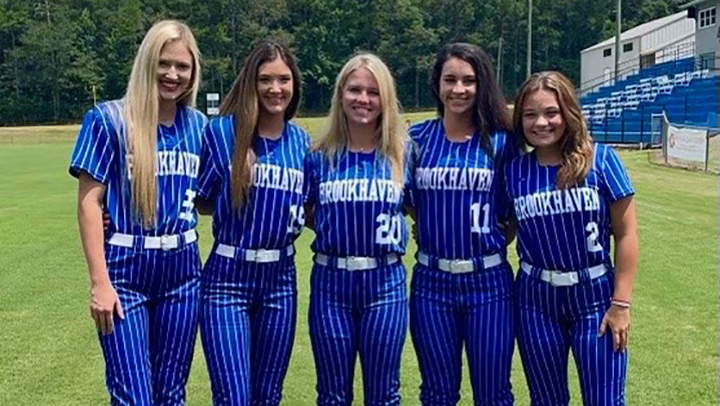 The names are familiar to even a casual fan of Brookhaven Academy softball.

Emily Claire Felder, Bailee Goodson, Madison Moak, Abby Grace Richardson — the core four that have been longtime starters for the Lady Cougars and are now seniors for coach Becky Flowers.

Felder, Moak and Richardson were all starters and key pieces as freshmen for Flowers when BA finished runners-up to Clinton Christian for a MAIS state championship in 2018.

Goodson joined the team in 2019 and has been a versatile starter since.

Flowers knows her seniors want more than that from their 2021 season.

“They’re very focused on working together and making sure we’ve got everyone pulling in the same direction,” said Flowers. “These seniors are taking their position as our team leaders very seriously. They really want to mentor their younger teammates.”

Riley Ruffin is a first-year senior on the team after moving to Brookhaven from Clinton. The rest of the roster features one junior in Reagan Newman and one sophomore in Karci Case.

“This was the first year that I had to have tryouts,” said Flowers. “We had forty girls come out and our younger classes have some really good talent. We’ll be counting on some of them to grow up quick.”

MAIS reclassification has BA moving up to the 5A ranks in 2021. The Lady Cougars will still be in the same district with Silliman and Oak Forest Academy. Joining them in District 4-5A will be Columbia Academy and Bowling Green School.

In the south division look for BA to compete with Copiah Academy, Oak Forest and Silliman in the upper tier of teams.

Felder is a Union University commit who will lead the Lady Cougars in the pitching circle. Last season she went 7-3 and struck out 111 in 97.1 innings.

BA has long had a strong one-two punch in the circle with Felder and Madi Smith splitting innings, but with Smith moving on to Southwest Mississippi Community College, having another arm in 2021 is a top priority for Flowers.

“Freshman Kensy Covington is going to be our second starting pitcher, “said Flowers. “She’s worked really hard at developing her pitches in the offseason and she got some varsity innings for us last year. It’s a long season and we play in some tough heat, so you’ve got to have more than one pitcher you can count on.”

What this team does have returning is offensive depth. The top four hitters last season return in Richardson, Moak, Goodson and Felder.

Richardson is a Co-Lin softball commit and took Daily Leader All-Area Most Valuable Offensive Player honors with a .597 batting average in 2020. She hit 11 home runs, seven doubles and two triples.

Moak is also pledged to next play at Co-Lin and the speedy cenerfielder barely trailed Richardson last year with a .533 batting average. Goodson batted .381 last and Felder drove in a team-high 31 RBIs last season while batting .368.

Like Richardson and Moak, Goodson is also a Co-Lin softball commit.

So, if you know that Richardson, Moak, Felder, Goodson and Covington are five solidified starters, who’ll fill those remaining spots?

In those positions Flowers will look to grow some of her younger talent.

Newman has worked on her slap-game at the plate and will start in the outfield. Maddie Bullock and Emme Barrett are two freshmen that have gained varsity experience already and Flowers is expecting continued improvement from the pair this season as their roles increase.

Eighth-grader Miriam Wallace is a transfer from Parklane that will be of value while freshman Bailee Parks is an Enterprise transfer that will see time at catcher.

“We’ve got a lot of versatile girls that can play in different spots and early on we’ll make tweaks to make sure we’ve got the right people in the best spots,” said Flowers. “If Bailee Parks is catching that frees us up to put Abby Grace and Bailee Goodson in the middle of our defense. I think our defense could really be one of our strengths this year.”

Seventh-grader Madelyn Lambert is another young player who will see varsity reps this season for the Lady Cougars.

The Lady Cougars will make their home debut on Aug. 9 when they host Copiah Academy.