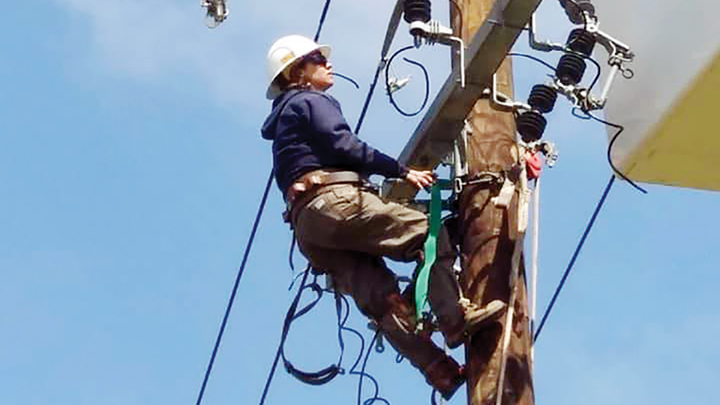 Donna Eubanks was not looking to make history — she just wanted to take care of her children as single parent.

But Eubanks, 28, is the first female lineman to work for Entergy Corporation, and she’s based in Brookhaven.

Originally from Perry County, she relocated to Monticello temporarily and hopes to move soon into Bogue Chitto.

Eubanks said she was initially interested in working within the electrical installation and repair business after seeing her brothers and dad working in the field.

“And being a single parent, jobs that are normally for typical women don’t put a lot of food on the table,” Eubanks said.

She began working for the energy company June 7, but she’s had much more than just three months of experience.

Entergy Brookhaven supervisor and 32-year power company veteran Mark White said he has seen women working in line installation, repair and maintenance for independent contractors, and knew Eubanks was a good worker because he had been around her and seen her working with SEC in emergency situations.

“Entergy is a very diverse company and everybody has an equal opportunity to come on board,” White said. “Being a lineman isn’t everybody’s line of work. Hours are long, in the hot or cold, but it’s a good living.”

The work she does building power lines, setting frame poles and maintenance, is not the difficult part of the job, she said. The job presents challenges for school-related things for her children, and they are not able to participate in sports, but they are rewards for the family, too.

“Entergy came to me and offered me a job with them,” she said. “On the contractor side, I was on the road a lot. I chose Entergy so I could be at home more and it’s a good company.”

She said her biggest encouragers all along her journey have been her family, and she is grateful to White for giving her the opportunity with Entergy.

“And my former foreman Josh Nations talked me into this step to get on with Entergy,” she said. “He saw the benefit it would be for me.”

Eubanks will be a lineman trainee apprentice for 32 months, after which she’ll “graduate” to journeyman. She did not attend a lineman school, but started with a contractor as a greenhand, learning on the job.

“You pay attention and learn the best you can,” she said.

Entergy has since hired another female lineman in North Mississippi, White said, and Eubanks said she knows of another one in Hammond, Louisiana.

White said he expects more women to move into this type of work.

“It shows our industry is changing,” he said.

Eubanks said any woman who wants to step into lineman work should take the chance, and learn the way that works best for them.

“It’s hard sometimes so don’t give up. Don’t cry in front of the men,” she said. “You have women out there that are single parents and they’re struggling, and if you can find just a little bit of a support system, then you can do this.”