I-14 now a little closer to being reality 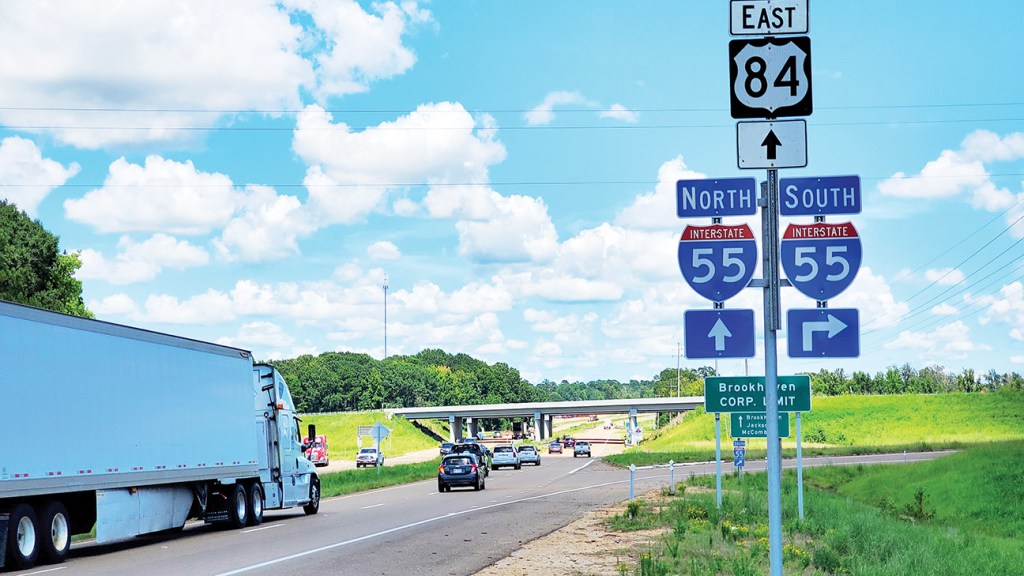 Photo by Brett Campbell The Interstate-14 expansion is planned to run east-west along the Hwy. 84 corridor, intersecting I-55 in Brookhaven and connecting West Texas to East Georgia.

A new interstate could soon intersect Lincoln County along the Hwy. 84 corridor, as I-14 moves toward expansion from West Texas through Georgia.

Co-sponsored by Sen. Cindy Hyde-Smith of Brookhaven (R-Miss) and Sen. Roger Wicker (R-Miss.), the amendment was offered by Texas Se. Ted Cruz and Georgia Sen. Raphael Warnock. It was also cosponsored by all senators from Texas, Louisiana, Mississippi, Alabama and Georgia.

The bill is included in the final package that now moves to the House for a vote and then to the desk of President Joe Biden for his signature.

Hyde-Smith did not vote for the final infrastructure bill, saying she was “unconvinced this rushed massive, one-shot bill is the best or most fiscally-responsible way to fix roads, bridges, water and wastewater systems, and the electrical grid. This bill is not paid for, increases the deficit and includes many unfunded intergovernmental and private-sector mandates.”

The Mississippi senator did, however, back the I-14 initiative.

“We know that projects that improve the transport of goods, services and people create opportunities for jobs, business development and economic activity,” she said. “As envisioned, the I-14 priority corridor has the potential to bring these good things to southwest Mississippi and other parts of our state.”

The House has already passed the INVEST bill which includes the exact I-14 language that is now in the Senate bill. That language includes all of the I-14/Gulf Coast Strategic Highway elements including the east-west corridor and north-south spur interstates in Texas and Mississippi.

If the Senate bill becomes law as expected the supporters of Interstate 14 across the five states will have achieved something the I-14/Gulf Coast Strategic Highway Coalition has been working toward for nearly 20 years — full congressional designation of this future interstate.

In 2015, Texas received a congressional designation for the interstate mostly consisting of U.S. 190, which crosses the center of the state. In April 2017, the first section of I-14 was officially unveiled — a 25-mile stretch of U.S. 190.

“I think that when the completed Congressional designation happens that we will see immediate changes to some things and then we will see medium- and long-range impacts,” said Garrick Combs, director of The Economic Development Alliance and the Brookhaven-Lincoln County Chamber of Commerce. “First, once the U.S. 84 corridor is officially designated as Future 14, we will change our marketing approach to business and industry as a two-interstate community. That, along with Canadian National’s main line rail, will give us further attractive logistical advantages that will be used to continue to recruit new companies to our community. We — The Economic Development Alliance — intend to take full advantage of the marketing opportunities that Future 14 will bring to us.”

Over the longer term, Combs says the area will begin to see construction activities along the Future 14 corridor, bringing jobs and making an impact economically.

“We must remember this will be a long-term project that will take years, if not decades, to complete,” Combs said, referencing I-22 in Northeast Mississippi, which took approximately 14 years to complete. “As the Interstate is constructed, it will have a massive, transformative effect on Lincoln County and Brookhaven. Everything from exit locations, to the future of the city’s growth, new retail corridors and new infrastructure will be influenced by the final path and make-up of Future 14.”

“This is huge for any city or town along this corridor — in Mississippi along what is now Hwy. 84,” said Monticello Mayor Martha Watts. “It will take years to complete but this will potentially have a great economic impact for all municipalities along Hwy. 84.”

“All the little towns along the way will have the opportunity to take advantage of it. I’m very excited but I realize this is years and years down the road. I want to stir enthusiasm in our community. I think it’s what we need here,” Watts said.

Brookhaven Mayor Joe Cox said he was looking forward to learning more about what comes next.

“It’s going to be a very slow process. It’s something that’s been in the works for several, several years and getting the designation is just the first part,” Cox said. “But it’s very positive for our area. I think it will have a very positive impact on our city and local area, but again — it’s a slow, slow process.”

Both mayors said they believed a new interstate would alleviate some of the traffic congestion on Interstate 20 in the middle of the state and I-10 across the Coast.

“This is just all good, and since the funding is there, for it to be used for something like this is wonderful,” Watts said.