Fast Five look for another state title as seniors 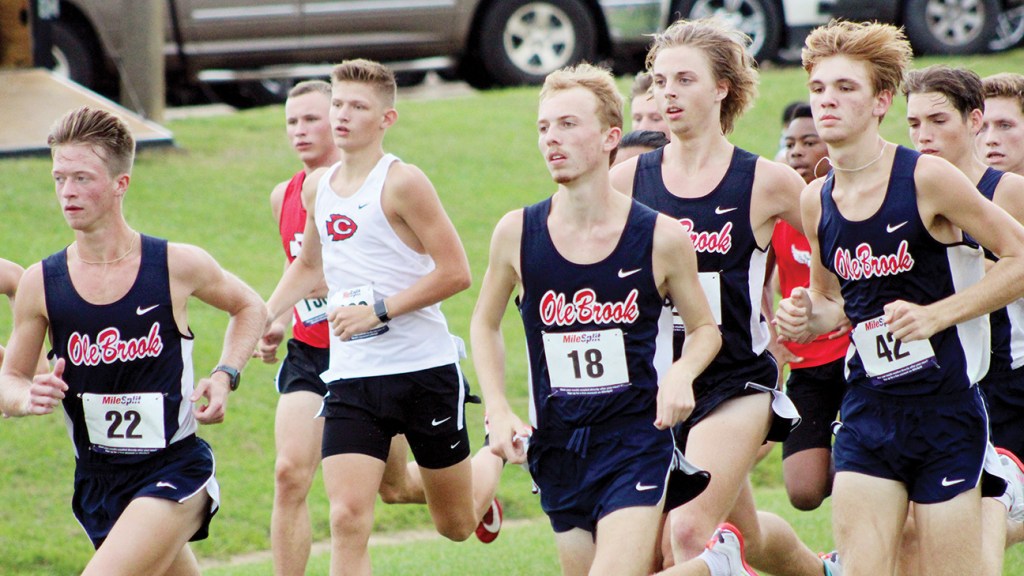 Photo by Cliff Furr The Brookhaven High senior quartet of Graysons Childress (No. 22), Sam Arnold (No. 18), Jake Thompson (No. 42), Collin Kellum (back left) and Trey Knott (back right) have led their team to two-straight MHSAA 5A team titles.

If you’re hanging with your best friends doing something you love — can you even really call that practice?

They’re teammates and classmates, but more than that — they’re a tightknit group that spends more hours together than they can count each week.

“There’s literally no telling,” says Kellum with a laugh when asked how much time the group is together in a given week.

And that makes sense considering how they’ve prepared for their senior season by logging 65 miles running together a week.

Sixty-five miles is the distance from Brookhaven to Natchez, FYI.

The Panther leaders aren’t going into their final season with anything less than the highest exceptions.

The BHS XC teams are led by head coach Shannon Knott and his assistant Kevin Bower.

“Coach upped our milage this year,” said Arnold. “We’ve always been cautious not to overtrain and get someone injured. Coming into our senior season though we told him we wanted to run more and that we felt like we were fit and could handle it. We’ve been doing this long enough to listen to our bodies and not push to the point of getting hurt. We’ve really set the bar high with practice for the type of year we want to have.”

Childress and Arnold both started their senior year with personal best on Thursday in taking first and second place respectively at the Ole Brook Invitational.

The race at the BHS training grounds of Hansel King Sports Complex is how the Panthers usually start their season each year.

“We wanted to go out at the right pace to run a 16-minute race,” said Childress. “The first mile we were on a 5:15 pace and then the second mile we slowed down a little bit, but I closed the last mile in five minutes flats.”

Childress’ five-minute final mile brought him across the finish line in 15 minutes and 40 seconds. Arnold finished in 15:59.

“16:06 was my previous best before today,” said Childress. “Training has been going really great. Through the summers we did two-a-days twice a week, tempo work on Mondays and track workouts on Wednesday and Friday. Then we’d run 13 miles together every Sunday.”

A half marathon every Sunday, Arnold wasn’t kidding when he said the bar has been raised in practice this summer.

The BHS cross-country teams had a cumulative 4.0 GPA last year, but don’t expect Trey Knott to come up with some formula for how many this group has run together over the years.

“I would think it has to be somewhere between 7,000 and 8,000 miles we’ve run together since we started training,” Knott said.

“It’s bittersweet running this race for the last time,” said Childress. “I’ll never forget running it as a freshman, it was my first 5K race and I had a great time that day.

Childress will be a favorite at the MHSAA 5A championship in November. He finished second overall last year to a senior who’s since graduated. He was second to that same athlete, Christian Balcer of East Central, when Childress was a sophomore and he finished third overall in 2018 as a freshman.

It takes five to make a team though and the quality of those five is why BHS is the top 5A team in the state and looking for a 3-peat in the classification at the championship meet in November.

Thompson says falling in love with the sport came naturally.

“We had other friends that came out and ran in junior high and as they quit you could see this core group forming,” said Thompson. “It just felt like we got really dedicated when we were young and that’s what’s kept us together — the bond of wanting to push each other to be better.”

For Kellum, he always loved to run, but he also loved to play other sports too.

“When I started running, I was playing soccer and baseball too,” said Kellum. “I’d just kind of pushed running to the side if something else came up. When I was a freshman though I realized that this is what I wanted to do most and if I was going to be good, I’d have to put in the work.”

Soon you won’t see the quintet of Arnold, Childress, Kellum, Knott and Thompson pounding the pavement of downtown Brookhaven. They won’t be racing up the side of South Jackson Street as they eat up their weekly mile totals.

They’ll have graduated and left behind an armful of first place medals and title trophies that will sit forever in the case that sits in the lobby of Brookhaven High School.

They’ll be in college and likely not altogether at the same school.

Even then at a distance, they’ll probably be pushing each other to go faster and run farther — just like they’ve been doing since coming out for BHS cross-country in seventh grade.

Cliff Furr is the sports editor at The Daily Leader. You can contact him via email at sports@dailyleader.com.