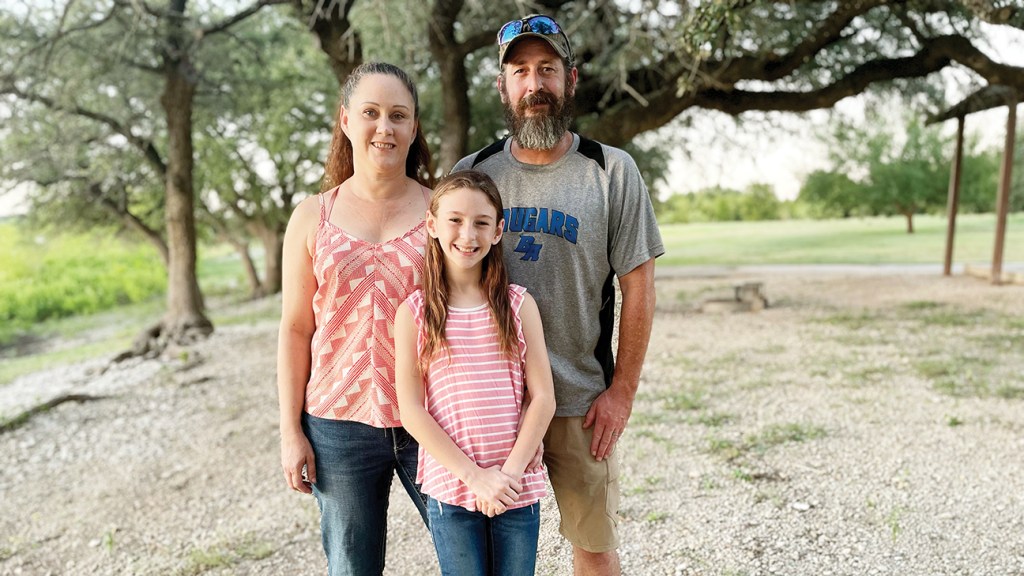 Photo submitted Derryn, Jayden and Josh Hamilton of Wesson, pictured near the Ft. Worth, Texas, filming site, were selected to be featured background actors in the “Yellowstone” series prequel “1883,” currently filming.

A Wesson family will soon be also known as a Yellowstone family.

It all started with daughter Jayden, a Brookhaven Academy student who loves the stage.

“She’s in an all-star cheer program, singling lessons and has been in plays at Brookhaven Little Theatre,” said mother Derryn Hamilton. “She’s really shown an interest for everything on the stage.”

Jayden’s first opportunity came as a student in Lifetime’s “Teacher’s Watching,” filmed in Clinton. From that time, she’s been on a contact list for extras in other films. She’s had parts in “Home Team” — a Netflix movie starring Kevin James; Morgan Freeman’s “Paradise Highway,” which filmed in Brookhaven earlier this year; and FX Network’s “Platform,” in which she played a bully.

“She would be in pretty much every episode,” Derryn said. When Jayden was selected by the casting director, Mom and Dad were asked if they would consider joining her as a Wild West family.

“We thought, do we really want to do this? It’s a big commitment, traveling and filming with them for three months,” Derryn said.

So they began to ask for help from family, friends and employers — and it all worked out.

Derryn and Josh were granted time off from their jobs and guarantees they would still be employed once they returned.

“For the past five years Josh has worked security in Afghanistan. He would be gone for three months and home for one,” Derryn said. “He has unfortunately missed so many of Jayden’s performances and adventures. In November, Dean and Heather Day offered him a job with their timber company and said they wanted to give him the opportunity to stay home with his family. For them to give him the opportunity to stay home was a huge blessing, for them to now allow him time off for this family adventure, especially with all that has happened in Afghanistan this week, I could never be grateful enough.”

Jayden had to give up BA cheer and dance this year, as well as dancing at Disney World. But she didn’t have to give up everything.

“We came to Fort Worth for call backs on the same day (BLT’s) ‘Willie Wonka’ play started,” Derry said. “So as soon as we were done in Texas we jumped on a flight and got back to Brookhaven just in time for her to be on stage.”

A competitive gymnast at Gym of Dreams in Brookhaven, Jayden will also get to work with a tumbling coach while on location, so she’ll stay up on her skills and be able to compete with her team when she returns.

“She doesn’t get out of school free,” her mother said. “The have a teacher here, and she’ll have school for about three hours a day and film for five hours a day.”

The trio will be around livestock every day as they film on location in Texas, Wyoming and Montana, filming in some locations so remote they’ll have to stay in tents.

“They said they’ll be air-conditioned tents, so there’s that,” Derryn said. “It should be a pretty interesting trip. We are up here, getting COVID tests every day. We have to wear masks everywhere.”

The family with deep Wesson roots is happy to have the opportunity.

“Without the support of our families and the friends from our community we couldn’t have made this happen. From Gym of Dreams allowing her to still compete with her team, Brookhaven Academy working with us, my employer Mobile Diesel Service and Day Brothers Timber giving us the time off, Brookhaven Little Theater allowing her to attend call backs during morning play rehearsal and still perform in the play that evening, to neighbors and friends watching our animals and property while we are gone, the support has been overwhelming,” Derryn said. “We are so excited for this adventure and even more excited we get to do it as a family.”

It won’t be the first time each of them has been on-camera — Derryn was in all of her daughter’s previous projects except one, because she was there already, and Josh was in the Morgan Freeman film because he is a truck driver and they needed more truck drivers. It was a chance for them to be around their daughter and see what she was doing, and how much she loved it. But this project gets them all together on screen, and Derryn says it couldn’t have happened without everyone’s help — including those taking care of their animals while they’re gone — and God making a way.

“We’re really blessed that we were able to get to do all this.”