Prep now: Hurricane Ida is on her way 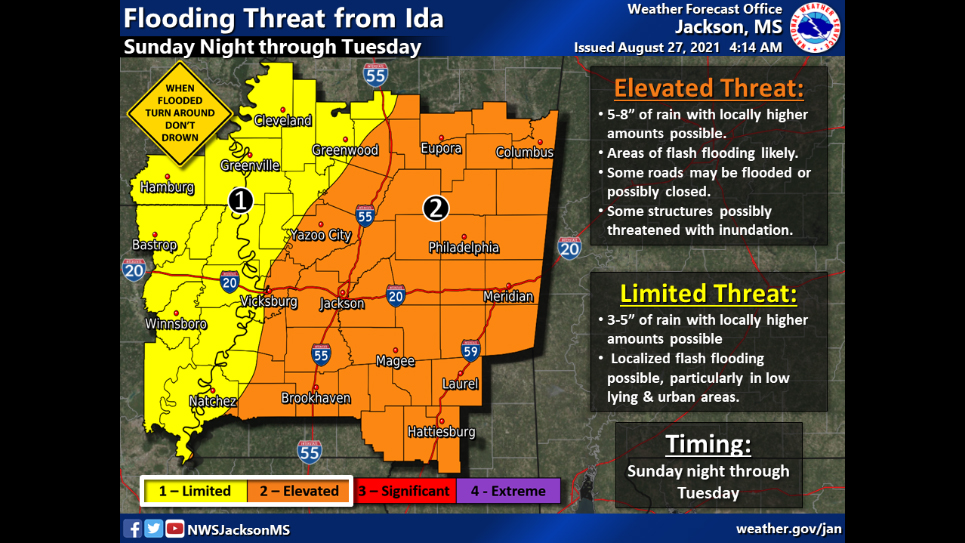 Elevated flooding threat in Lincoln County from TS Ida, which is expected to be a Cat-3 hurricane by the time it makes landfall Sunday.

Lincoln County is under an elevated threat of flooding as tropical weather moves closer to the Gulf Coast.

Tropical Storm Ida has formed and is expected to enter the Gulf of Mexico Friday night and continue moving northwestward toward the central Gulf Coast as it strengthens into a major hurricane Sunday.

The storm will potentially impact Southwest Mississippi with flash flooding and strong winds Sunday through Tuesday.

Ida could be a Category 3 hurricane by the time it makes landfall in the Mississippi River delta late Sunday, with winds reaching 120 mph, according to the National Hurricane Center. If the forecast holds true, Ida will hit on the 16th anniversary of Hurricane Katrina, which landed as a Cat-3 with 125 mph winds south of New Orleans.

On Friday morning, the storm’s maximum sustained winds rose swiftly from 40 mph to 65 mph as it approached Cuba. Tropical storm-force winds extended as far as 90 miles from its center.

A hurricane watch was in effect Friday from Cameron, Louisiana, to the Mississippi-Alabama border. Dangerous storm surge is also possible across the Gulf Coast, with 7-11 feet of water — if pushed at high tide — from Morgan City, Louisiana, to Ocean Springs, Mississippi.

“There is an increasing risk of life-threatening storm surge, damaging hurricane-force winds, and heavy rainfall Sunday and Monday, especially along the coast of Louisiana,” the hurricane center warned.

Ida could dump 8-16 inches of rain across the Coast, with 20 inches in isolated areas. More heavy rains are likely across Mississippi when the storm moves inland, the hurricane center said, causing “considerable flash, urban, small stream and riverine flooding.”

The Mississippi State Department of Health and the Mississippi Insurance Department cautioned people living inland to not ignore the possibility of damage for hundreds of miles, including flooding, heavy rains, high winds and possible tornadoes.

Lawn furniture and grills should be tied down. Photos should be taken of property prior to the storm hitting, in case damage occurs. Have a family evacuation and communication plan and update your emergency supply kit with cash, medications, a battery-powered radio, important documents and one to five gallons of water for each family member and pet.