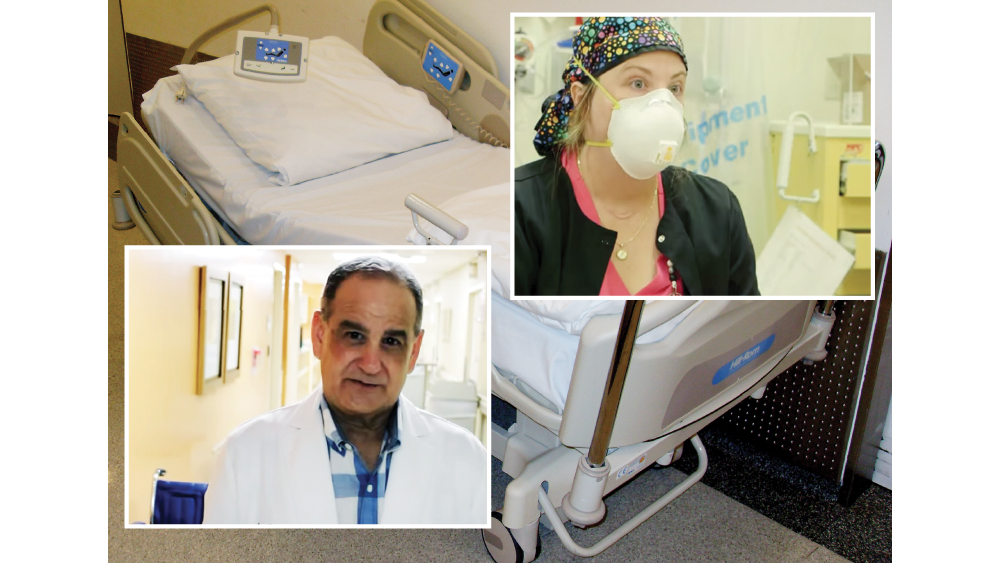 File photo/Facebook screen grabs Above left, Dr. Ray Montalvo, internal medicine specialist at King’s Daughters Medical Center, said most of the overcrowding of hospitals with COVID-19 patients is preventable, if people will get vaccinated. Above right, KDMC ER nurses Kimberley Jones described the combination of very sick patients and not enough staff as a “nightmare.”

COVID-19 numbers continue to rise in Mississippi, heavily affecting hospitals and schools in what has been described by medical professionals as a preventable nightmare.

More than 4,000 new cases of COVID-19 were reported in Mississippi Friday morning, as well as 65 new deaths.

The numbers reported by the Mississippi State Department of Health are from data received by 3 p.m. the previous day.

Forty-two new cases were reported in Lincoln County, elevating its total to 4,731, with 122 deaths.

The county has a high level of community transmission of the virus, with just more than 17% of tests showing positive results, according to data from the Centers for Disease Control and Prevention. Fewer people are being tested — a seven-day total of approximately 350, compared to 380 previously — but a higher number are testing positive with the coronavirus — 17.05% versus 14.32%.

Less than one-third of the county has been vaccinated.

‘It’s been a nightmare’

Fourteen COVID-positive patients were in King’s Daughters Medical Center in Brookhaven as of 10:30 a.m. Friday. Twelve were unvaccinated. The intensive care unit had eight patients, six on ventilators.

Although the ICU is at its eight-bed capacity, the number is a dramatic improvement over the previous few days.

Thursday, KDMC was at 185% capacity, with five to six COVID patients routinely held in the emergency room, according to Emergency Room Manager Nick Smith.

Sixty-one hospitals in Mississippi have requested extra help, KDMC is No. 17 on the list. Mississippi ranks 49th in the country for vaccinations.

As of Thursday, the most recent numbers reported to MSDH, 1,607 people were hospitalized with confirmed COVID-19 infections and 54 with suspected infections. Intensive care units had 449 patients, 323 on ventilators.

‘Most of this is preventable’

Most of the COVID overcrowding issues in hospitals are preventable, according to a local internal medicine specialist.

“As many of you know, my friends, the hospital system has been overrun with COVID,” Dr. Ray Montalvo said in a video posted to the hospital’s Facebook page Thursday morning. Montalvo is an internal medicine specialist and has been in Brookhaven 30 years.

“For the last week and a half I’ve been here in the mornings and the clinic in the afternoons,” Montalvo said. “It’s been exhausting. Quite frankly, it’s exhausting mentally and physically. I’ve seen many of the health care providers, health care workers in the office. They’ve cried to me. We’ve cried together. I’ve gone home, cried to my wife. It’s been very difficult.”

At least 22 hospitals statewide had no open ICU beds this past week. Many other hospitals were not yet at capacity, but had no ability to staff the beds.

“The real focus has been on trying to get staffing so we can keep people in hospitals and utilize those beds to release the pressure on the system,” State Epidemiologist Dr. Paul Byers said during a press conference Wednesday.

Montalvo said fewer older patients are being seen because they got vaccinated early on. Most cases in the hospitals now are in younger people, he said.

“It’s heartbreaking. If any of y’all could be up here and see what we see, I think it would change your mind to get the vaccine. I guess we have failed as medical professionals in not convincing a lot of the younger population to get the vaccine. I’m just here trying to help educate,” said Montalvo.

“The problem is most of this is preventable. The vaccine does help. We know this. We have the data,” he said. “Please get your vaccine.”

About 15% of all K-12 students statewide have been quarantined since the beginning of the school year, either testing positive for COVID-19 or due to known exposure. The MSDH data includes 65,525 students ordered to isolate in that time.

About 443,000 students are enrolled in the state’s public school system.

Schools have also confirmed 2,383 cases among teachers and other school employees in August, including 945 over the past week. One year ago, only 945 had tested positive. By the end of the fall 2020 semester, the total reached 3,928.

Schools have quarantine an additional 3,157 employees for exposure, bringing the total number of K-12 employee isolations to 5,540 — about 8% of all K-12 faculty and staff statewide.

“Only schools which have reported weekly data to MSDH appear on each week’s report. Some schools may report data late or incompletely,” MSDH says.

It also does not include data from Mississippi’s private schools.

The University of Mississippi Medical Center, which includes the state’s only pediatric hospital, reported this week that it had 23 children in its care who have been diagnosed with COVID-19. At least one K-12 student died with COVID-19 during August.

During a press conference this week, Gov. Tate Reeves said people were making “irresponsible conclusions” to assume all exposures occurred within schools.

“Now if you’re a teacher or an employee, the best way for you not to have to be put in a position where you’re trying to be convinced whether you’re going to take personal leave or not is to not get COVID,” Reeves said. “And to be vaccinated certainly reduces your risk. It doesn’t eliminate it, but reduces your risk considerably. As I have repeatedly done throughout this year, I encourage each and every one of you to consult with your doctor, study the facts and decide what is best for you and your family.”

The Associated Press and Mississippi Free Press contributed to this story.