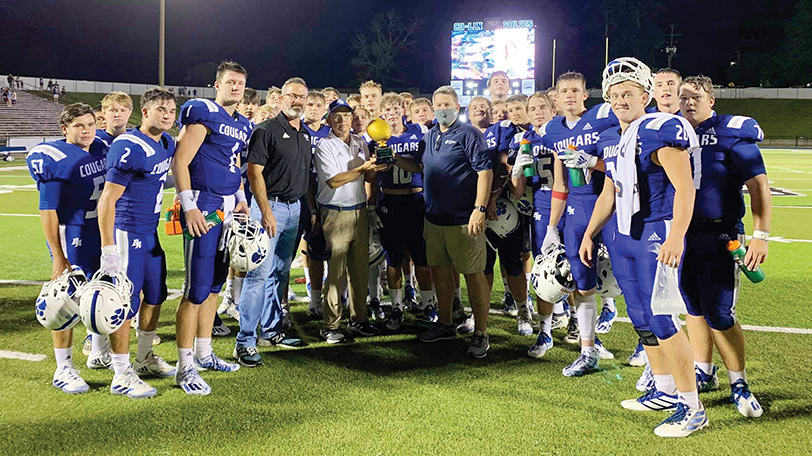 Photo by Cliff Furr The Brookhaven Academy Cougars accept their trophy from KDMC and Co-Lin officials after getting a 40-14 win in Wesson at the KDMC Kickoff Classic against Central Holmes Christian School.

The Cougars led 27-8 over the Trojans at halftime and felt comfortable not pouring it on in the second half as the teams finished the game cleanly.

Senior running back John Rivers Brown went for 137 yards on the ground to lead BA. Senior quarterback Tyler Fortenberry scored twice on the ground while picking up 77 yards himself.

Through the air Fortenberry finished 13-of-21 for 232 yards and four scores.

A 63-yard pass from Tyler to Trevor was the opening BA score of the night.

Trenton Tarver led the BA defense with 7.5 tackles and Easton Boyte added seven tackles of his own. Carter Smith recovered a fumble while both Jackson Porter and Thomas King had a sack each for BA.

The Cougars are on the road Friday as they travel to play Bowling Green School in Franklinton, Louisiana.