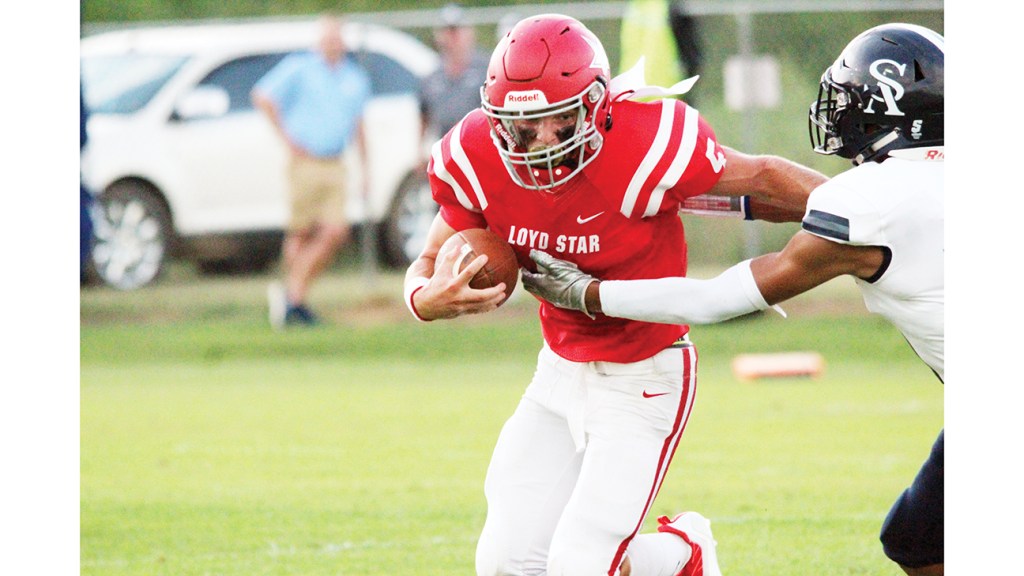 Photo by Cliff Furr Junior running back Bryce Ford takes on a would-be St. Andrew’s tackler Friday night in the first quarter. Ford caught the game winning touchdown in overtime to give his team a 26-23 win.

Loyd Star junior quarterback Carter Holcomb rolled to his left and waited. Holcomb then delivered a sidearm pass that found a forward-diving Versie Wilson in the back of the endzone.

The Loyd Star coaching staff and players ran onto the field in celebration as the score came in overtime. Visiting St. Andrew’s Episcopal had settled for a field goal in their opening possession and Wilson’s catch from six yards out set off a wild party for the team.

The band played, the cheerleaders jumped around and everyone prepared to head home happy in Hornetville.

Except there were two flags on the field.

One was a hold on Loyd Star and the other was a dead-ball unsportsmanlike penalty on the Saints.

The play didn’t count and now Loyd Star would operate from the 9-yard line on their final play of the game, needing a TD.

Holcomb again rolled in the same direction and again waited, but it looked like St. Andrews had made the right adjustment and wouldn’t get fooled again.

A pass to nearly the exact same spot in the western endzone of W.E. “Sambo” Smith Field this time found a sideways-sliding Bryce Ford.

Ford cradled the ball to his body for the touchdown as the Hornets had won 26-23 and the delayed celebration started right back where it left off.

Loyd Star head coach Brian Ford has a 100-megawatt smile on his face after talking and praying with his team near midfield.

His son hadn’t only caught the game winning catch, Bryce Ford had been dominant carrying the ball all night — unofficially finishing with 236 yards on the ground.

The Hornets battled cramping all night. Starters would come to the sideline to stretch their calves, drink down pickle juice and then run back onto the field with a slight limp.

There wasn’t a man wearing red that didn’t find himself on his back Friday, needing a hand up from a teammate in a game that went over three hours on a humid, late August night.

“Fantastic victory for us, the guys just kept playing and I can’t say enough about them,” said Bryan Ford as he clutched the game ball.

A collision between Loyd Star players as they both tried to field a punt in the first quarter ended with a fumble that was recovered by the Saints.

One play later Saint Andrews senior running back Jamon Harkless ran in from 27-yard to put his team up 7-0.

The Hornets responded on the next drive as big runs from senior Versie Wilson and Bryce Ford moved them quickly down the field.

The drive culminated with a 27-yard TD run by Ford. The 2-point try was caught by Wilson and Loyd Star led 8-7 with 3:12 remaining in the first quarter.

The Saints answered as they scored on the first play of the second quarter, this time a 5-yard run by Harkless. Wilson stuffed the 2-point try at the goal line to make the score 13-8 in favor of the visitors.

The home team answered back though. A long Bryce Ford run got the Hornets down to the 3-yard line and Julius Smith plunged in on the next play to make it a 14-13 game.

Last season Smith was the starting quarterback, but he’s been moved to a running back role in 2021.

The combination of Ford, Smith, Wilson, fullback James Godwin and Holcomb running behind a big, experience offensive line kept the SAE defense guessing most of the night.

“Carter was really poised for us,” said Ford. “He’s the type that when I tell him, hurry up and get us to the line, he can do just that.”

A big play later in the second quarter was an interception by Loyd Star junior defensive back Cortez Smith in his team’s endzone.

The second half started with the Hornet defense getting another stop and the offense grabbing momentum with a Goodwin 5-yard TD run to make the score 20-13.

It stayed like that for much of the second half, but with 10:49 remaining in the game, the Saints hit on their only big passing play of the night.

Sophomore quarterback Friend Walker found a wide open Rolen Fanning behind the Hornet defensive backfield for a 57-yard TD pass that tied things up at 20-20.

Later in the quarter St. Andrews drove deep into Loyd Star territory before a bad-snap and a 15-yard penalty forced them to punt.

The second LS fumble of the fourth quarter gift wrapped an opportunity for St. Andrews to sneak out of Lincoln County with a win.

A dropped handoff exchange gave the Saints the ball on the LS 18-yard line. The Hornet defense buckled though down and forced a 31-yard field goal attempt that barely got airborne which set the table for the overtime period.

St. Andrews had the ball first in OT and got a 19-yard field goal by Fanning to take a temporary lead.

“We won in spite of ourselves tonight,” said Ford. “We had way too many penalties and turnovers. Procedural penalties that we shouldn’t have after scrimmaging last week. We only had 10 guys on the field for our defense a couple times. We kept fighting though and now we’re 1-0 and ready to start preparing for next week.”

Loyd Star is scheduled to travel to play at McLaurin on Friday while St. Andrews will host St. Patrick.