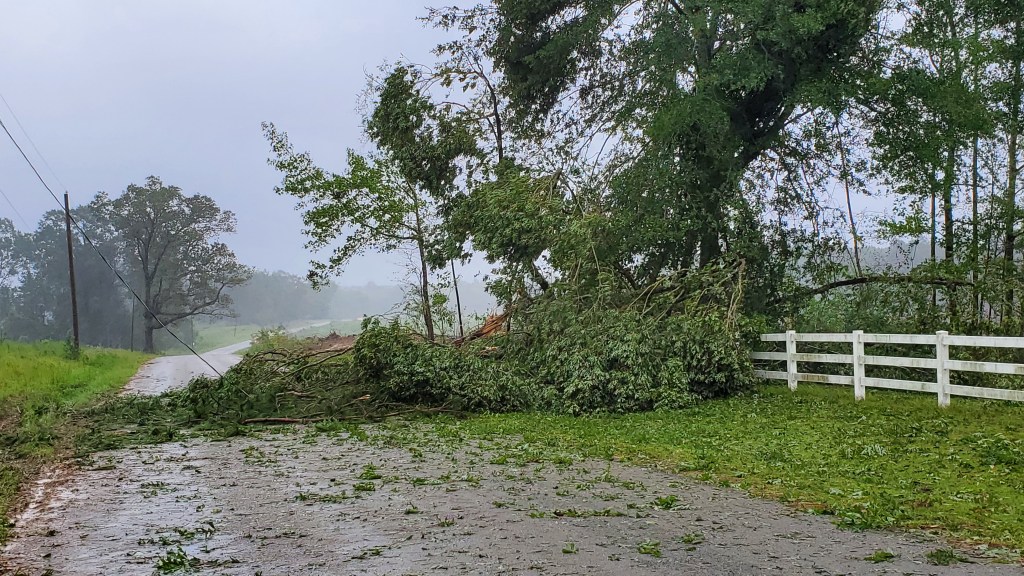 “Don’t get too close! There’s a power line under that tree and it’s still hot!” the homeowner called out from his driveway.

Hurricane Ida caused a tree to fall during the early Monday morning hours and now it lay across West Lincoln Drive not far east of Jackson Liberty. The power line was visible from each side of the road, and stretched out of sight behind the house.

Motorists slowed and stopped on either side, many pausing to take a good look before turning around to head back the way they had come.

“It fell and pulled my pole off the side of the house,” said the homeowner.

He pointed toward another man who was pulling on gloves by a work truck.

“He went around there to look, and a frog jumped up and bumped the air conditioner,” he said. “Fried that frog.”

If the man had come into contact with the metal a/c unit, he likely would have met the same fate as the frog.

“I recorded 42 mph winds at the office but mine is down in a hole,” Emergency Management Director Chris Reid said. Winds of 50 mph and higher were reported in parts of the county, he said.

Significant damage in Lincoln County has not been reported, but thousands of customers were without power Monday afternoon. Representatives from Entergy and Magnolia Electric said work was progressing as quickly as safely possible.

Downed trees should be approached cautiously, as they may conceal power lines that are still hot. Downed power lines should never be touched by anyone other than professional electrical linemen.