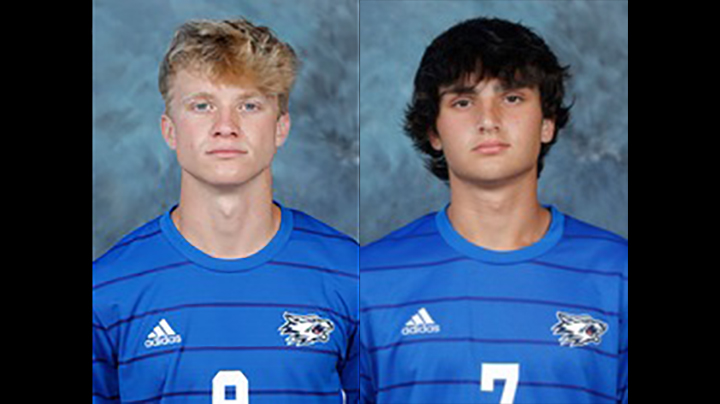 Photos by CLCC Sports Info The Co-Lin soccer freshmen duo of Zach Sorey and Hardy Lewis have combined for seven goals through the first two matches of the season for the Wolves.

The Copiah-Lincoln men’s soccer team is off to a strong start with a 2-0 record on the season after winning 4-2 at Northwest last week and 7-1 at Holmes on Tuesday.

The Wolves are under the direction of second-year head coach Tom Cosgrave and were 3-7-2 in the spring season played earlier this year.

The MACCC has soccer back on its usual fall position of the calendar and Co-Lin will be back on the road today when they travel to play at Southwest Mississippi CC in Summit. The Wolves don’t make their home debut until Sept. 21 against Pearl River.

In the win over Northwest, it was a pair of freshmen who provided the offense for Co-Lin. Hardy Lewis (Brandon HS) and Zach Sorey (Hartfield Academy) registered two goals apiece while also chipping with an assist each.

Lewis kept his hot start going with a hat-trick in the win at Holmes. He was on the assist end of Co-Lin’s first goal that came off the foot of sophomore Eli Fratesi (Washington School).

Cosgrave also coaches the CLCC women’s team, who lost 5-2 to Northwest and 5-1 to a Holmes team that went 15-1-1 in the spring season — losing 2-1 in double overtime to Phoenix College in the national title game.

Co-Lin and Holmes were tied 1-1 at halftime on the strength of an Anacie Leyland (St. Helens, England) goal. Sophomore goalkeeper Alexandra Moon (Poynton with Worth, England) stopped 12 of the 16 shots she faced in the match.

CLCC also started strong against Northwest as they led 1-0, before the Rangers made a comeback. Sophomore Taylor Ford (Florence HS) scored both goals for Co-Lin in the loss.

The women’s match will get underway at 2 p.m. today in Summit and is followed by the men’s contest. The matchup is the first division contest of the season for both teams. The Southwest men are 3-1 on the year.

The Southwest women are 2-2 with wins over Itawamba and Hinds thus far. SMCC has a few local connections in freshman Ella Silvan of Wesson and freshman Taylor Levy of Brookhaven.