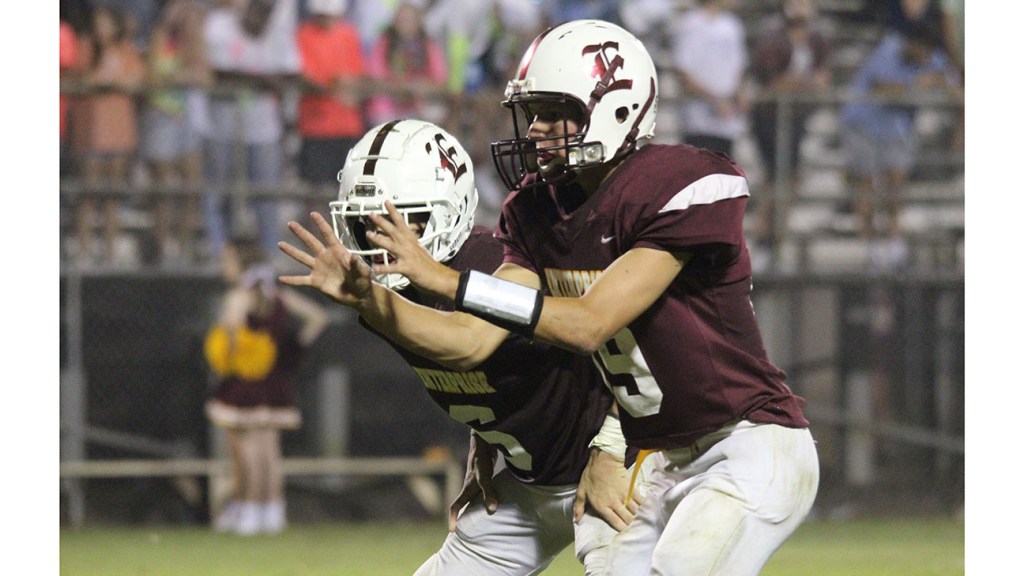 Photo by Cliff Furr Freshman quarterback Wyatt Garrett of Enterprise prepares to receive a snap as running back Matthew Burns looks on.

A packed Harry Cole Field saw Enterprise jump out to a 12-7 lead over their county rivals from Bogue Chitto Friday night.

That first quarter lead became a 28-12 halftime deficit though as the Yellow Jackets struggled with turnovers all night in a 38-20 loss to the visiting Bobcats.

EAC senior Jonas “Trap” Caldwell picked up a fumble on the opening kickoff by BC and returned it for a score to give coach Trey Woodard’s team a jolt to start the game.

The Jackets also got a rushing touchdown from freshman quarterback Wyatt Garrett in the early going.

With senior running back Seth Mitchell out, Garrett played QB and the Enterprise starter from their win two weeks ago against Hillcrest — senior Mathew Burns — slid over to play running back.

Bogue Chitto got two rushing touchdowns from Easton Sartin along with another ground score by Hunter Goebel on the night.

Junior quarterback Colton Frith and junior receiver Cameron Williams hooked up on a scoring pass for coach Gareth Sartin as well in the win. Frith also had a rushing touchdown of his own.

Senior kicker Carson Price booted a 30-yard field goal on the first play of the fourth quarter to put his team up 38-12. Both coaches subbed liberally late to get younger players some experience.

Burns scored the final Enterprise touchdown of the game and Caldwell added the 2-point conversion on a run with two minutes remaining in the fourth quarter.

“Happy to get the win, but we didn’t practice as good this week as I’d have wanted to,” said Sartin. “That led to us coming out sloppy and flat to start with. You win ball games Monday through Thursday in practice. We need to have a good week of practice before our next game.”

The Bobcats (2-1) will host Mize next week on Troy Smith Field.

The message from Woodard to his young team was to keep their heads up. 1A Enterprise has 16 freshmen on their roster and were at a size disadvantage against a Bogue Chitto team that was bigger in the trenches.

“We turned the ball over five times and that’s the killer,” said Woodard. “We played hard and we got after it, but we tackled awful and couldn’t hold on to the ball. Coach Sartin is a great coach and took advantage of the size they had on us. I’ve got to do a better job coaching, the boys got to do a better job on their assignments, and we’ve all got to keep moving forward.”

The Yellow Jackets were making their home debut after beating Hillcrest on the road in the opener and getting a forfeit win over Ethel last week. Enterprise (2-1) will be on the road in Liberty next week to face the Amite School Center Rebels.