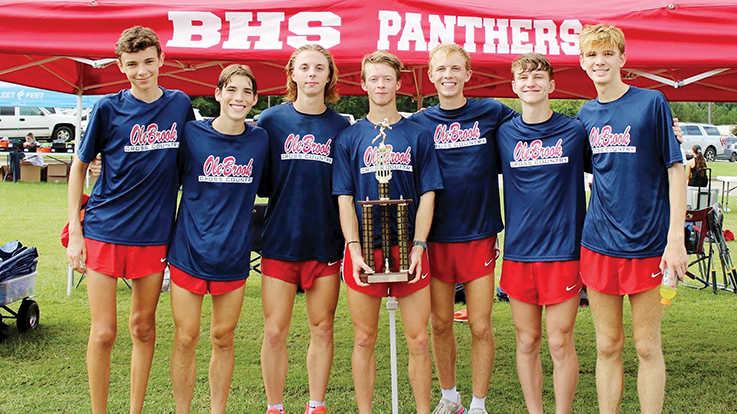 Since the emergence of the Brookhaven High as a state contender in the MHSAA 5A cross-country scene, the Panthers have always known who their strongest competition will be on the championship level.

Saltillo High is located north of Tupelo in Lee County. The school is 250 miles and four hours away from Lincoln County, but has a passion for cross-country that’s mirrored at Brookhaven High.

For the last two years BHS coach Shannon Knott has taken his team to the Saltillo Invitational to see their rivals up close ahead of the 5A State Championship Meet later in the year.

Saturday the Ole Brook boys’ team did what they’ve done every time they’ve raced this season — finished at the top of the podium. BHS senior Grayson Childress finished first overall on the 5K course with a time of 16 minutes and eight seconds.

Childress is the odds-on favorite to win the 5A individual title later in the year and he’ll likely be closely racing his fellow senior teammate, Sam Arnold. Arnold was second overall at Saltillo with a time of 16:12.

Senior Jake Thompson finished in ninth place overall for BHS with a time of 17:05. Ole Brook senior Trey Knott matched his best time of the season with a 17:14 that netted him 14th place.

The top five runners for each team have their time scored and for Panthers the fifth finisher at Saltillo was senior Collin Kellum with a time of 17:50 in 23rd place.

There were 316 individual runners in the 4A-5A-6A race and 22 total teams competing for first place against BHS in the event.

Saltillo finished second behind Brookhaven in the boys’ race. The hosts were the 4A-5A-6A girls’ competition runners-up behind Hernando High. The BHS girls team finished ninth out of 19 teams in that race.

The Saltillo girls have won six 5A state titles in a row. The BHS boys will look to win their third-straight 5A championship later this year.

Knott says there is mutual admiration between his team and their rivals from Saltillo.

“They’re definitely doing something right,” said Knott. “They’ve been winning championships, especially on the girls’ side for many years. They consistently have over 100 kids try out for their team every year. I believe myself and our team respect what they do.”

The ascent for Brookhaven High in the world of cross-country has been a gradual climb over nearly a decade.

Saltillo again swept the team titles for boys and girls in 2015, but Brookhaven High began to close the gap thereafter.

In 2016 BHS produced their first individual state champion as junior Adrian Lockwood finished first overall in the 5A title meet to help put the Ole Brook boys into the runners-up position in team competition, one place ahead of Saltillo.

The BHS girls finished third overall in 2016 as Saltillo won the state title that year.

From 2017-2019, the Lay Panthers were runners-up three times to championship winning teams from Saltillo.

The breakthrough for the BHS boys happened in 2017 when they squeezed out Saltillo by four points for the first cross-country state title in school history. Lockwood was second overall that year behind his teammate and fellow senior, Andrew Knott.

SHS got a measure of revenge the next season with a one-point win over the Panthers. BHS won big in taking the title in 2019 and last season they edged out Saltillo by seven points for their third 5A title in the last four years.

Brookhaven High will compete Saturday at the Clinton Arrow Invitational. On Oct. 2 the Ole Brook varsity teams will run in the 22nd Annual Jesse Owens Classic Invitational. The race is a massive event that takes place at Oakville Indian Mounds Park in Danville, Alabama.