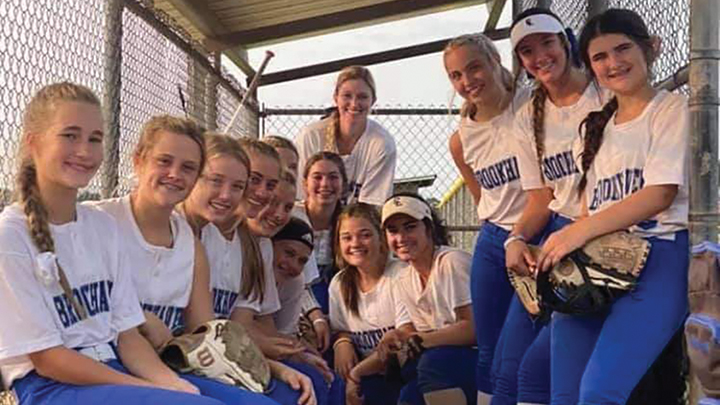 Photo submitted Brookhaven Academy softball will host the MAIS 5A South State Tournament this weekend at the Hansel King Sports Complex. Tournament play continues on Monday with a champion crowned that afternoon.

The MAIS 5A softball South State Tournament bracket couldn’t be sorted out until Natchez Cathedral and Copiah Academy finished a game Thursday that had been delayed by rain on Tuesday.

Thursday the game was concluded in Adams Count as Cathedral beat Copiah to win their district and go into the tournament as the no. 1 seed from MAIS District 3-5A.

The No. 1 seed from District 4-4A is a Brookhaven Academy team that’s now won nine in a row and comes into tournament play with a 22-3-1 overall record.

The top four teams from the 5A South State Tournament hosted this week by BA at the Hansel King Sports Complex will move on to play next weekend in Magee at the state tournament.

Coach Becky Flower’s team will take on Adams County Christian School Saturday at 10 a.m. in their first game of the tournament. A win moves BA to a 2 p.m. matchup against the winner between Copiah Academy and Bowling Green School.

BA beat Copiah 4-2 when the teams met way back on Aug. 9. There’s plenty of familiarity between the programs as Flower’s son Drake is an assistant coach for Copiah Academy.

Cathedral meets Columbia Academy in their first-round game. The winner of that plays the winner between Central Hinds and Silliman Institute.

Silliman was the only team in the district to beat BA this season, a 6-4 win on Aug. 24 in Lincoln County.

The Lady Cougars got their revenge this week with a 6-5 victory at SI in Clinton, Louisiana that clinched the district title for the team.

Silliman led 3-0 after two innings before a four-run third inning pushed Brookhaven Academy ahead. The homestanding Lady Wildcats tied the game in the bottom of the sixth, before Brookhaven went ahead for good in the top of the seventh.

The heart of the Lady Cougar order produced in the win over Silliman. Leadoff batter Madison Moak had two hits and scored one run. Senior Abby Grace Richardson bats behind Moak and drove in two runs and hit her 13th home run of the season while also drawing two walks.

Fellow senior Bailee Goodson bats third for Flowers and produced two hits including a double. Goodson, Moak and Richardson are all committed to continue their softball careers next season at Co-Lin.

Wednesday, Felder struck out eight and walked one in earning the win. She gave up five runs on nine hits and threw 150 pitches to clinch the district title.

“Emily Claire really dug deep to find something more Wednesday,” said Flowers. “She adjusted to how the game was being called behind the plate and gave everything she had.”

The senior leaders got some big hits from their younger teammates as well. The freshmen duo of Emme Barrett and Bailey Parks had an RBI each in the win over Silliman.

“Our freshmen class is one we count on heavily and they’re only getting better,” said Flowers.

The loss to Silliman is the only one for BA this season that came in a full 9-inning game. Their other defeats to Hartfield Academy and Simpson Academy came in time shortened games played in tournaments. That was also the setting for their tie against Tri-County Academy.

Admission to the tournament this weekend will be $8 per person. Only team coolers will be allowed inside the ballpark.

It’s a double elimination event and the top four teams from Saturday move on to play again on Monday. The championship game is scheduled for Monday at 4 p.m.

That’s the one that BA wants to be playing in, the school won a south state title in 2018 when this group of seniors were freshmen.

Though they come in as favorites, Flowers is telling her team to not take anything for granted this weekend.

“The message is the season starts over Saturday,” said Flowers. “No matter how well you’ve played all season, you can lose two games Saturday and it’s all over. This group has goals left to reach and they’re very focused on getting it done.”