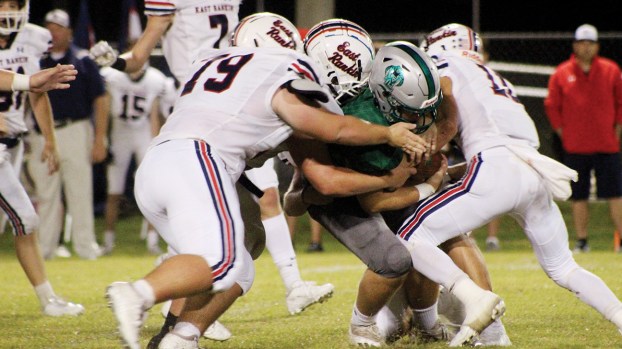 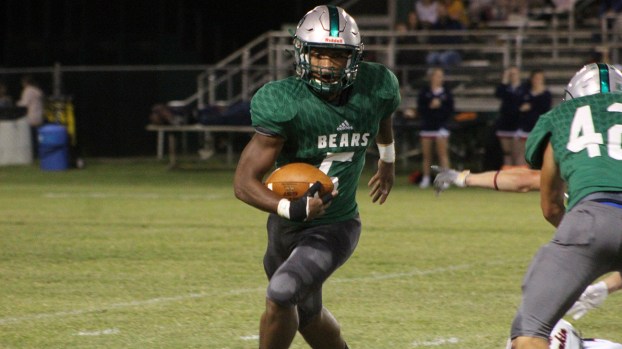 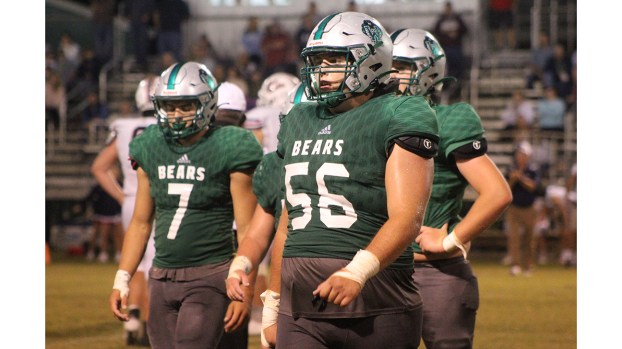 Photo by Cliff Furr Senior lineman Jackson Taylor and his teammates come to the sideline during a timeout called by West Lincoln in the second half of their game against East Rankin Academy. 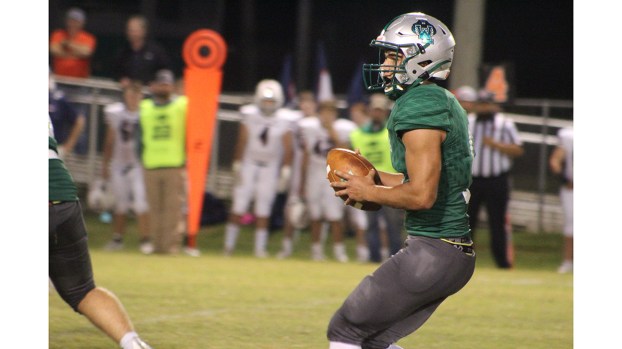 The West Lincoln Bears came alive in the fourth quarter to tie up the visiting East Rankin Academy Patriots 14-14 with 90 seconds remaining in regulation Friday night.

The large home crowd at Perry Miller Field was likely thinking of overtime and what end the team would play on in the extra period as the hope was the tie would stand.

ERA wasn’t playing for overtime though and scored the go-ahead touchdown with 44 seconds left on a 38-yard touchdown pass from sophomore quarterback Reece Cordell to 6-foot-3 tight end Walker Floyd.

The 20-14 win moves East Rankin to 2-3 on the season. Coach Brad Bland’s Bears are now 0-4 with a Region 7-2A home game against Loyd Star looming next week.

It looked like the first half would end in a 0-0 draw as both teams traded turnovers in a swift moving opening 24 minutes of football. The first two quarters were finished in just 45 minutes of real time.

East Rankin was driving into West Lincoln territory when Enrico Price picked off a pass with 73 seconds remaining until halftime.

Price went down to get the ball and West Lincoln took over on their own 23-yard line.

Trying to play fast, the Bears moved quickly towards midfield. East Rankin then returned the turnover favor as sophomore Bryson Loe picked a pass with 13 seconds left in the second quarter to give his team the ball back on the West Lincoln 36-yard line.

Cordell hit Loe in stride over the middle on the next play and the lanky receiver raced in for a touchdown that put the Patriots up 8-0 as the halftime horn sounded.

Coach Brad Breland’s East Rankin team increased their lead to 14-0 on the first drive of the second half when Cordell hooked up with Floyd on the same play they’d later use to win the game.

The Patriots were content to run inside all night, lulling the West Lincoln defenders to sleep and setting up the play action to the tight end.

The spark that had been missing for West Lincoln came from their defense in the second half.

Senior linebacker Hayden Boyd met a pitch play with his helmet, knocking the ball into the air for West Lincoln.

The fumble landed right in the arms of a running Colby Hall. A junior, Hall raced 50-yards to the endzone. The point after kick was no good, but WL only trailed 14-6 with 2:03 left in the third quarter.

In the fourth quarter East Rankin had a chance to put the game away, but a penalty made a 4th-and-1 at the 10-yard line a 4th-and-6. Senior linebacker Caleb Nations snuffed out the ERA passing play and gave his team the ball back on their own 16-yard line with 2:05 remaining in the game.

Bland called for the Wild Bear formation as senior running back Enrico Price moved to the quarterback position on the final West Lincoln drive of the night.

Price ran for a first down on his first carry out of the formation.

And then, when everyone in the stadium knew he was getting the ball on another carry, Price made what might have been his best run of the year.

He swept outside to the left and lowered his shoulder to run over an East Rankin defender. Price then cut back across the face of the defense to completely reverse field as a tide of white jerseys waved in his wake.

On the 2-point conversion, senior quarterback Ashtin Autonberry went under center and dove ahead on the sneak to tie the game at 14-14.

West Lincoln attempted an onside kick that struck one of their players before going 10-yards, giving East Rankin the ball at the 48-ard line ahead of the Patriot’s go-ahead score.

A last-gasp drive by West Lincoln ended with an interception as East Rankin took a knee to secure the win.