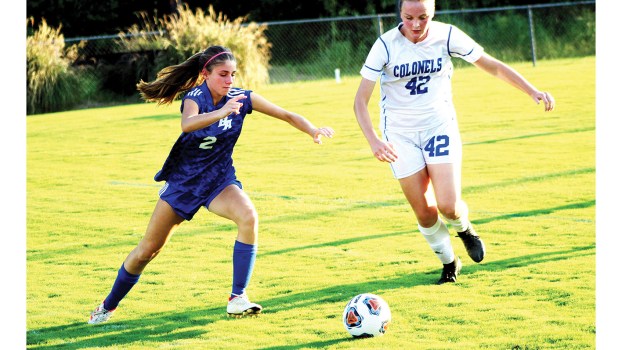 Photo by Cliff Furr BA sophomore Mallory Martin outruns a Copiah Academy defender to the ball Tuesday in MAIS soccer action. Martin scored a goal and tallied two assists in a 5-0 win that clinched BA their first ever district title. 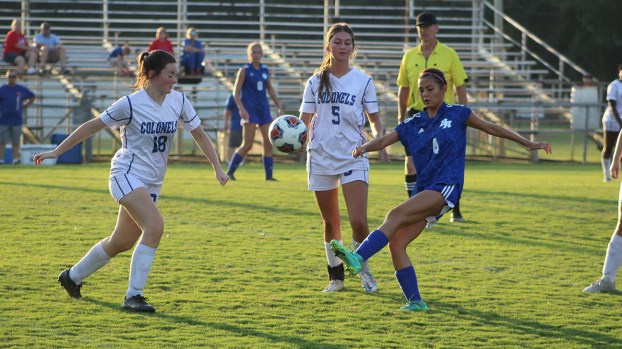 Photo by Cliff Furr Anna Caroline Adams works to maintain possession against Copiah Academy. The speedy Adams is one of the leading goal scorers for BA this season. 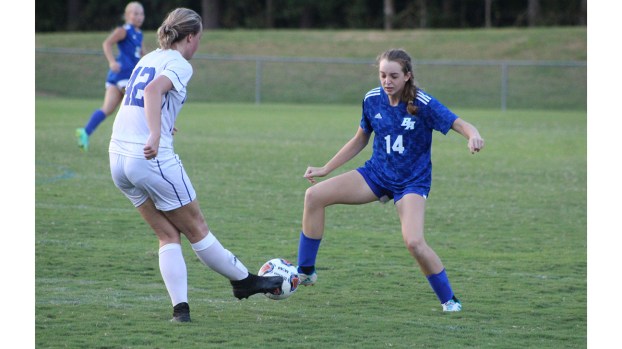 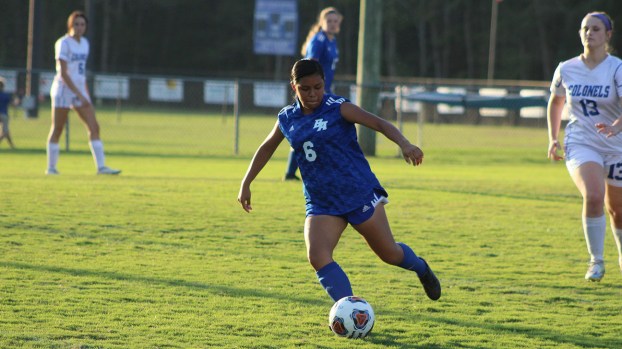 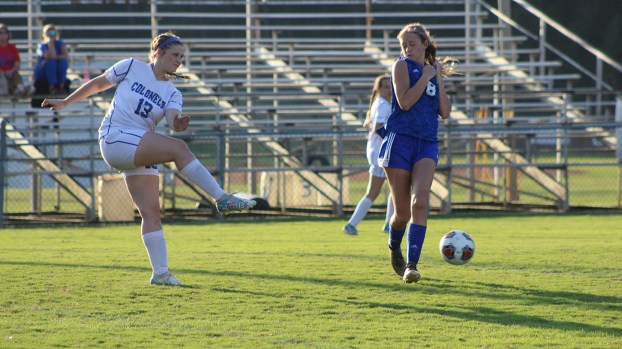 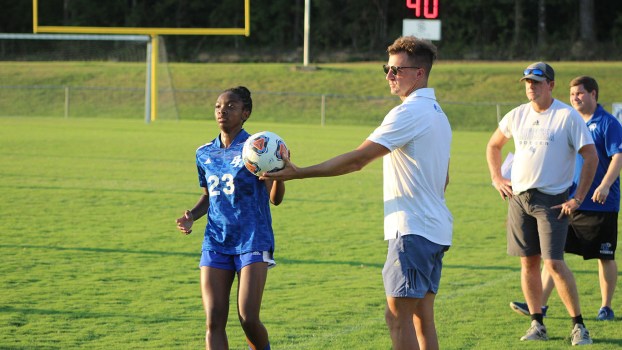 It was a historical week on the campus of Brookhaven Academy as the girls’ soccer team clinched a district championship for the first time in program history with a 5-0 win over Copiah Academy Tuesday on R.M. “Red” Stuard Field.

BA still has a trip next week to play at Natchez Cathedral on Tuesday, Sept. 28 for the final division match of the season.

The Lady Cougars compete in Division II of MAIS soccer and play in the South Region. The lone region defeat of the season for the team was a 3-2 double overtime loss at Adams County Christian School on Aug. 23.

Thursday the team traveled to Jones County and played the Laurel Home School Knight Hawks. Laurel took a 4-2 win in penalty kicks after the match ended in regulation tied 0-0. Laurel is now 17-1-1 on the season while BA dropped to 19-5-1 on the year.

There is still a tune-up road game remaining on the schedule for BA when they play at Discovery Christian in Florence on Thursday, Sept. 30.

An opponent for the first home playoff match in BA soccer history isn’t set yet, but the Lady Cougars knows they’ll host the no. 2 seed from the Central Region on Tuesday, Oct. 2 at 6 p.m.

Madison-St. Joe — an MAIS newcomer this year after leaving the MHSAA — and East Rankin Academy are among the strongest teams in the Central Region.

Brookhaven coach Alex Brown is the first dedicated hire for soccer in school history. Brown teaches Spanish at the school and coaches the boys’ team which begins their season at the conclusion of football.

Brown began working with the team when school finished in May and the squad kept up a training routine all through the summer.

“The girls have been relentless,” said Brown. “They work so hard for each other. This is probably the best group I’ve ever had as far as attitude, work ethic and team comradery go.”

Brown has previously coached the sport at Parklane Academy and Southwest Mississippi CC. Soccer at BA has largely been paraprofessionally led in the past. Last season Randy Spring coached the teams, stepping out of his comfort zone of being a long-time baseball coach.

Mark LeBlanc and Clint Rounsaville are two of those parents that have helped grow the teams by serving as coaches for both teams at BA in the past. They are still involved as assistants for Brown this season.

“I have three outstanding assistants in Mark LeBlanc, Clint Rounsaville and Brannon Dickerson,” said Brown. “From administrative help, to on the field training, our tactics, in-game decisions and adjustments — these guys have been phenomenal for me and the girls. I couldn’t do what I do without them.”

Senior Anna Caroline Adams scored two goals for BA in the win over Copiah. Sophomore Mallory Martin got the Lady Cougars on the board in the first half when she stayed connected with sophomore Reagan in a run through the box.

Fortenberry centered a pass and Martin filled the space to blast a shot past the Copiah goalkeeper. Fortenberry also added a goal as did junior Sarah Rodgers Smith. Martin finished with two assists.

Freshman Matti Claire Smith, junior Emma Grace Price and freshman Ava Calcote are all important defensive pieces for the backline that rarely get subbed out.

Senior goalkeeper Amelia Anding has 15 games this season where she didn’t concede a goal. The tall, athletic Anding doesn’t leave opposing teams much choice in where to place their shots.

She’s one of three seniors for BA along with Adams and Rounsaville.

“Our defense and goalkeeping have been the strength of the team,” said Brown. “We’ve only allowed 18 goals in 25 games. However, our offense has been strong too, we’ve scored 58 goals in that same time period.”

BA finished second in their district in 2018 but lost to eventual state champion St. Aloysius in the opening round.

“I told the girls the day I met them that my goal for this season was to win district, host a playoff game and win a playoff game and that we could build off that,” said Brown. “They’ve always seen the end goal when we’ve been training and they understand everything the coaching staff asks of them is meant to grow, shape and prepare them for the future.”