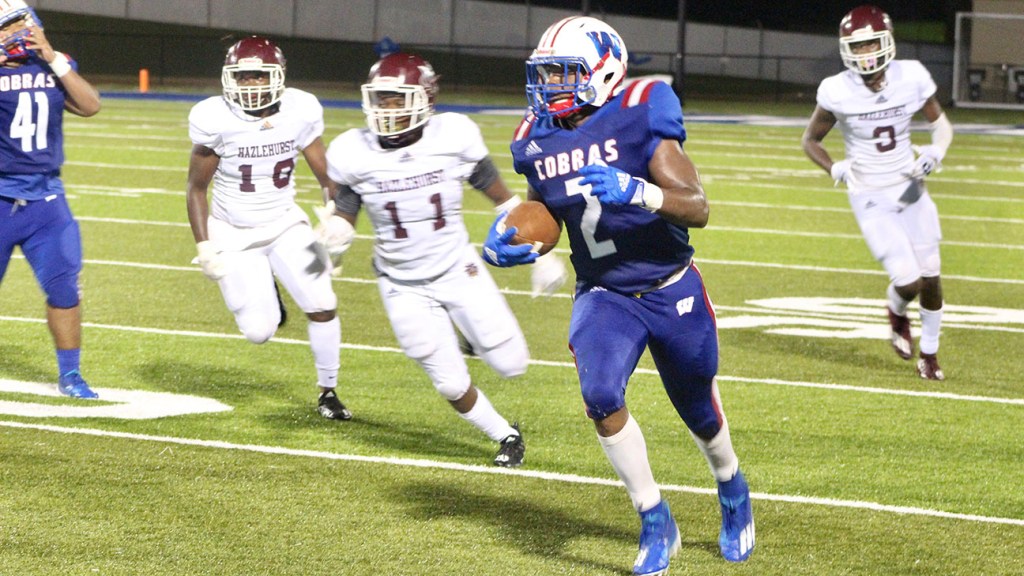 Photo by Cliff Furr­­ Wesson senior running back Col​lin McGowen takes the ball down the sideline just before halftime against Hazlehurst Friday night.

Here’s a look at how the area school faired in Friday night football action.

Junior defensive back Tarayvian Miller leapt in the air to slap away a Hazlehurst pass in the endzone Friday for Wesson. Miller batted the ball away as it went over his head — right into the waiting hands of HHS wide receiver Qatavius Stewart for a touchdown.

That made the Hazlehurst lead 25-0 and was the fourth and final score of the first half for the Indians. It was just that kind of night for Wesson as the speed and depth of Hazlehurst overwhelmed the Cobras in the Region 6-3A opener for both Copiah County schools.

Six-foot-2 safety Doug Nelson patrolled the back end of the HHS defense and senior linebacker C.J. Sutton held down the middle of the field for the Indians. Sutton transferred to Hazlehurst after finishing second on the team last year in tackles for Wesson.

Senior defensive end Jumarion Larry checks in at 6-foot-4 and 237-pounds and was another impressive Indian along with 6-foot-3 wideout Zyquavious Harris.

Coach Jeremy Loy’s Wesson team has battled injuries this season. Defensive end Cody Munn has missed significant time after an injury to his leg. Senior offensive lineman Tyler Fuller was out after being ejected against Mize last week.

A muddy King Field was the stage for a big 24-12 Brookhaven High win over the Laurel Golden Tornadoes Friday night. The Region 3-5A victory for Ole Brook broke a Laurel three-game win streak in the series that goes all the way back to 1911.

“Our defense played unbelievable all night,” said BHS head coach Tucker Peavey. “Our offense didn’t do what we needed to put the game away but that’s something we can work to fix.”

Special teams also came up big for BHS as a third quarter punt by sophomore Bryce Smith was downed on the Laurel 1-yard line. Two plays later the Panthers secured a safety.

The Panthers also blocked a punt that led to an early score.

BHS led 16-6 at halftime. The Ole Brook defense picked off two Laurel passes — both interceptions were snagged by senior defensive back Jaden Watson.

LHS gained 187 total yards on the night while the Brookhaven High offense picked up 166 total yards.

Sophomore running back Xavier Gayten rushed for 103 yards on 22 carries. BHS completed just one pass in the win.

BHS (2-4) faces another tough region test next week when they travel to Waynesboro to play the Wayne County War Eagles (4-1).

The Eagles jumped out to a quick 8-0 lead, but Coach Brian Ford’s Hornets responded with three unanswered touchdowns to go up 20-8 at halftime.

The third quarter was all East Madison though as the lead evaporated into a 26-20 EM advantage.

Like a tennis match between two players returning shot after shot, the teams traded scores in a thrilling finish.

A 3-yard Versie Wilson touchdown run helped put Loyd Star back ahead 28-26. East Marion returned serve to then go up 32-28.

“This was a fantastic win for us,” said Loyd Star coach Brian Ford. “Really proud of the kids and all the support we’ve gotten throughout the season. We’ll face a very good, well coached Bogue Chitto team next week.”

West Lincoln got an Ashtin Autonberry touchdown on the opening drive of the game and the Bobcats later answered the score as both conversions were no good to leave the game tied 6-6 at halftime.

In the second half Bogue Chitto coach Gareth Sartin’s team went ahead on the first drive of the second half and padded that lead with a Carson Price 32-yard field goal to further extend their advantage late in the game.

Brookhaven Academy led their homecoming game over Hillcrest Christian 41-0 at halftime and that ended up as the final score as a running clock in the second half helped the final two quarters pass quickly.

The second half was in doubt as Hillcrest was nearly out of healthy players after the first 24 minutes of play. BA coach Anthony Hart played the youngest Cougars on the team after halftime.

BA quarterback Tyler Fortenberry only attempted seven passes. Five were caught and three of those went for scores. Logan Alexander returned the opening kickoff 82-yards for a Cougar score.

Brookhaven Academy (5-2) is back home next week taking on Sylva-Bay Academy (2-4).

The Bay Springs Bulldogs celebrated homecoming with a 57-0 win over Enterprise Friday in Jasper County. Coach Trey Woodard’s EAC Yellow Jackets (2-4) will host Richton next week on Harry Cole Field in another Region 4-1A game.

Lawrence County is 1-0 in Region 7-4A action after getting a 47-20 win in Brooklyn over Forrest County AHS. The Cougars under the direction of coach Jesse Anderson are now 4-2 on the season and play Poplarville (5-1) next week in Monticello.